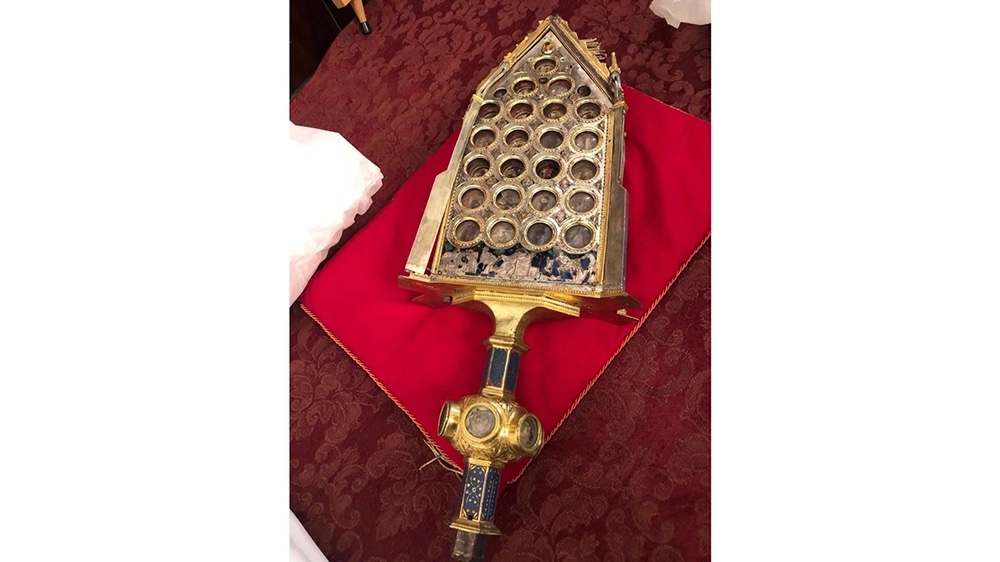 A 13th-century reliquary and a cache of medieval artefacts have been recovered by Italian police after being stolen more than 30 years ago. The items were discovered inside the home an antiquities collector near the port city of Catania in Sicily.

The cache of artefacts, which includes medieval chalices and devotional objects, was taken from the Seminary of Monteriggiono, a medieval walled village in Tuscany, back in 1989. The relics were found in the collector’s home by a specialised unit of Italian police that focuses on the theft of art and cultural items. He is now under investigation for receiving stolen goods. “[The collector] was not able to provide a valid explanation as to how he came to possess them,” Italian police told the Telegraph. “These very precious reliquaries represent an exceptional testimony to the cult of devotion to San Galgano.”

Indeed, the elaborate gold and silver reliquary, a container for holy lyrics, has quite the back-story. It was dedicated to Saint Galgano, who had lived his life as Galgano Guidotti, a rich nobleman and warrior in 12th century Italy. According to an Italian legend—which bears a striking resemblance to the sword-in-the-stone story of King Arthur’s Excalibur—Guidotti had miraculous epiphany that changed his life. “After seeing the vision of the Archangel Michael in 1180, he called into question his whole existence and decided to dedicate himself to God. To symbolise the start of his new life, he thrust his knight’s sword into a rock,” investigators said. After that moment, Guidotti became a hermit and was made a saint by Pope Urban III a few years after his death in 1181. The sword, still stuck in the stone, is the centrepiece of a church in the Tuscan village of Montesiepi.

Legend or not, the historical importance of the recovered items is not in dispute. The collection is “almost without precedent in terms of its importance from a historical and devotional point of view,” according to Barbara Jatta, Italy’s director of museums.

The recovered artefacts will now undergo a six-month restoration by experts at the Vatican Museums. Some of the relics have reportedly been damaged over the last three decades. Once restored, they will be returned to their home. “These sacred objects will return to the place from where they were stolen many years ago,” said Dario Franceschini, Italy’s culture minister. The same is not likely true of the collector who kept them.

Buzz Aldrin’s Moon Landing Jacket Could Fetch Up To £1.6 Million At Auction