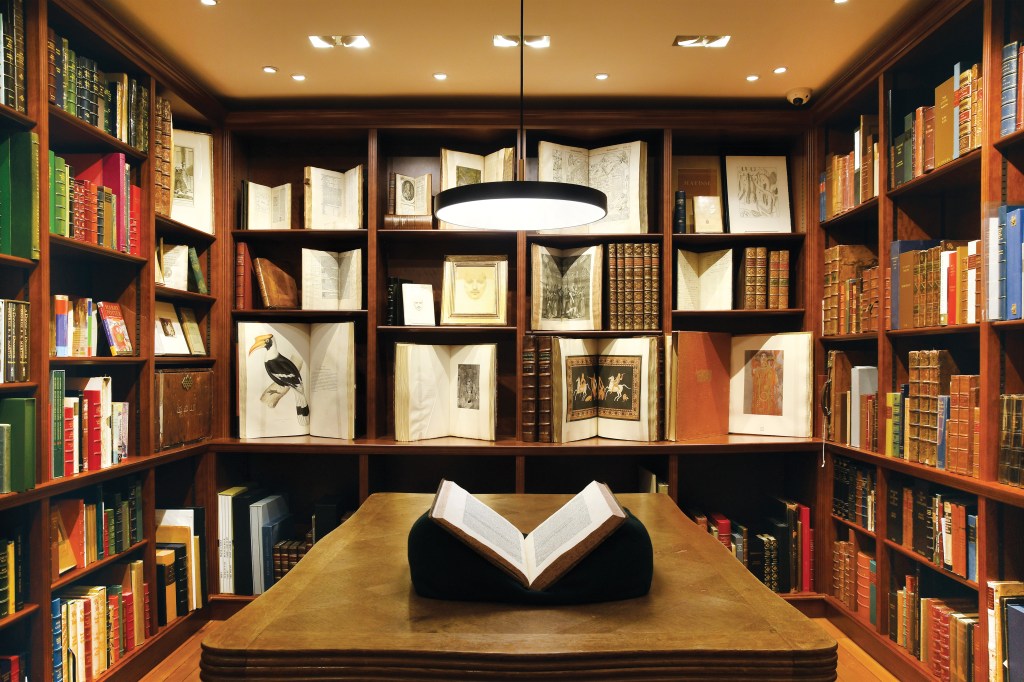 Ahead of the publication of Peter Harrington Rare Books’ Fifty Fine Items catalogue, published later this month, the company director offers his choice of the most collectable tomes in circulation.

A Bible, From The Mid-13th Century

Over 750 years old, this Bible was written and illuminated in Oxford – it comes from the library of the enigmatic English book collector David Swan, as identified by the inscription Bibliotheca Swania. £97,500

Wuthering Heights remains consistently among the top bestsellers of all classic novels in the English language, and this marbled first edition is published as part of a three-decker volume with her sister Anne Brontë’s Agnes Grey making up the third. £195,000

Alberto Sangorski was one of the twentieth century’s most revered illuminators, and this highlight from the golden age of fine book production is a fine example of his work – a manuscript of Edgar Allan Poe’s selected poems in a sumptuously jewelled binding. £125,000

This book paved the way for a lifetime of spin-offs and adaptations. Fleming inscribed this copy to Anthony Kelmsley, whose father owned The Sunday Times and offered Fleming a job with a special clause in the contract allowing him time off each year to write the Bond novels. £95,000

This miniature manuscript is truly magical – handwritten, illustrated and signed by J.K. Rowling for a charity auction in 2004, the pages detail Harry’s first trip to Diagon Alley with Hagrid to buy his school supplies. £125,000

The right to gloat is as old as time, and in this rare edition of Galileo’s second published work, the 17th century scientist glories in the defeat of a rival, Baldassar Capra, who had plagiarised his compass. £175,000

I’m particularly excited about this edition of Johnson’s greatest literary labour, compiled in the garret of his house in Gough Square. It’s one of very few copies surviving intact in its bookseller’s boards, which makes it remarkably rare and valuable. £275,000

A First Edition of John Lennon’s In His Own Write

The first ever solo project undertaken by a member of the Beatles, this rare edition of John Lennon’s book is signed by all four members of the band, with a special inscription from McCartney reading “Best wishes, from Uncle Paul”. £22,500

A First Edition of Ptolemy’s Cosmographia

One of the most influential books in the shaping of the modern world, the Cosmographia gave the exact locations of every place in the known inhabited world of 1475, and formed the basis for the first printed atlas. £450,000

My last pick is a lovely early edition of Walt Whitman’s great song of America, bound with gilt edges and marbled endpapers. Whitman self-published this work and his money ran tight as production continued, meaning that the bindings became progressively less elaborate. £250,000

Pom Harrington has worked in the rare book business for more than a quarter of a century, having grown up in one of the most respected book-selling families in Britain. He is currently the Director of Peter Harrington, the largest rare and antiquarian book dealership in the UK and Europe, with two gallery-style stores based in Mayfair and Chelsea.