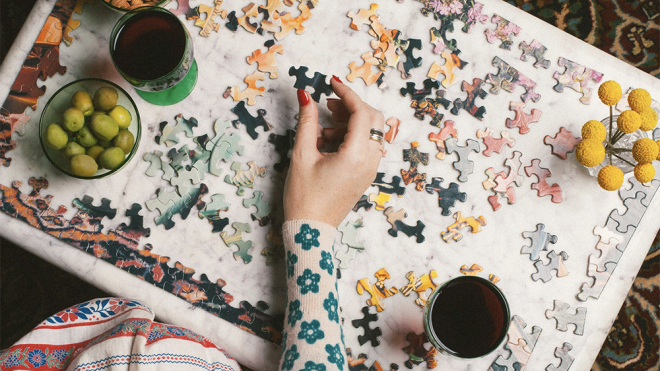 It’s no secret that the country is now stuck inside—or will soon be—for the foreseeable future. And while we all know it’s for the greater good, that doesn’t make the tedium any easier to manage—especially when binge-watching Netflix finally starts to lose its luster. At some point we all need a break from the screen. So, what about a puzzle? No, not the simplistic cardboard jigsaws you remember from childhood, but singular works of puzzle art that take serious time and concentration to complete and reward you with pictures as striking as anything hanging on your walls. Below are 10 complex, high-end puzzles that will let you rediscover the luxury of going analog, even if it’s just for a few hours.

You could argue that each puzzle on this list is a work of art in its own way. But none are as striking Saint Laurent’s Kate Moss Puzzle. The entire puzzle is a dramatic photo of the supermodel sitting in the surf shot by Inez and Vindooh from the fashion house’s Winter ’18 campaign. That image is enough to sell it, but at 2000 pieces it’s also a puzzle that’s sure to keep you and yours occupied for quite some time.

Time for Machine’s 3-D puzzles aren’t the most complex on this list, but the end result is a little more than you’d normally get from a jigsaw. Available in either metal or wood, each kit can be built into a very cool looking model of a classic car or plane. Our personal favorite: the Glorious Cabriot 2 (though the Heavenly Hercules isn’t too bad, either).

Of course, if you want to build something bigger than a car or plane, CubicFun has got you covered with a series of 3-D puzzles inspired by some of the world’s true architectural marvels. The set based on the London’s St. Paul’s Cathedral consists of 643 pieces—which the brand claims will take you 16 hours to put together—and even opens up to show off the church’s interior.

Leave it to the Museum of Modern Art to serve up some of the most striking art puzzles around. The pick of the lot, though, is this uniquely die-cut recreation of Frank Stella’s Firuzabad. It may look easy at first, but at 750-pieces and with a whole spectrum of colors, prepare to set aside some serious time to complete this jigsaw masterpiece.

There are puzzles and then there are Stave puzzles. Over the last five decades, the Vermont company has earned a legion of diehard fans with its intricate, hand-cut jigsaws made from five-ply, cherry-backed wood. While all Stave’s challenging puzzle are museum-worthy, its $2,000 (£1700)-plus limited-edition sets are the company’s “masterpieces.” All are mind-blowing in their own way, but particularly noteworthy are the pop up book-like Stavely Manor and H.M.S. Pinafore puzzles.

At first glance, the Gradient Puzzle looks simple. Consisting of 500 pieces, it’s a rectangle that fades from one color at the top to another at the bottom. And therein lies its unique challenge: Once you begin working on a Gradient Puzzle, you quickly learn how hard it is to puzzle out a picture when there are no details other than color to use as landmarks. Of course, that only amplifies the sense of accomplishment when you complete one. Even better: Once you finish your first, there are four other colour combos to complete.

Available here, around £21 plus shipping

Like the Gradient Puzzle, Dusen Dusen’s Pattern Puzzle is deceptively difficult. Available in one of three patterns, each 500-piece jigsaw features an abstract color-heavy design—Arc, Stack or Lenticular. But once you start trying to put each of these psychedelic puzzles together you’ll find that these designs are anything but simple.

A 3,000-Year-Old Egyptian City Has Just Become the Most Important Archeological Discovery Since The Tomb Of King Tut