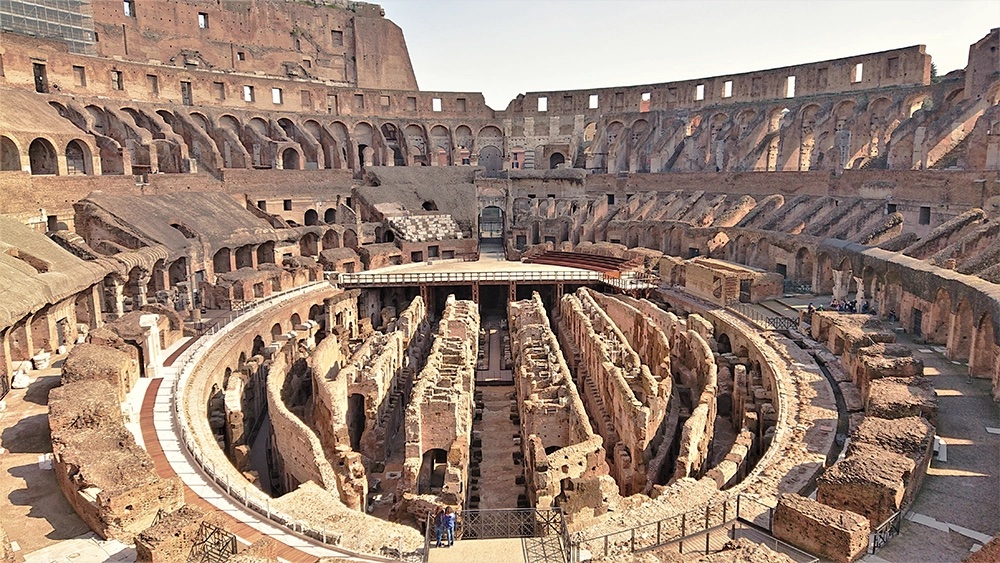 The past year was a particularly challenging one for Italy but, through it all, the Colosseum stood sentry, as it has for almost two millennia. And now, as il bel paese emerges from Covid-19’s hold, the Roman monument is reopening with a fresh coat of proverbial paint and a newly restored expanse that is accessible to visitors for the first time ever—all thanks to another Italian icon, Tod’s. Coming after the pandemic’s hardships, the recent announcement of the Colosseum’s restoration sends an even larger message: Italy is back.

Diego Della Valle, chairman and CEO of the Tod’s Group, first took the Colosseum under his wing in 2011, when he pledged €25 million to restore the ancient landmark. The patriotic fashion exec kicked off a trend for Italian brands funding the beautification of the nation’s architectural treasures: Fendi took on the Trevi Fountain, Bulgari got the Spanish Steps and Maison Margiela and Diesel parent OTB Group committed to Venice’s Rialto Bridge.

An arcade within in the hypogea during its restoration. Massimo Testa

The first phase of Tod’s work, completed in 2016 in partnership with Rome’s Archaeological Heritage Department, tackled the structure’s facade. But the second phase, the fruits of which debuted on June 25, revealed a vast area of the building that has never been seen by the public—even in the arena’s heyday.

The newly restored hypogea was essentially the Colosseum’s locker room, a level below the amphitheater’s main stage where gladiators would gather and get prepped to appear before crowds of as many as 75,000 people. Those spectators never got to see these private quarters, which makes their restoration all the more exciting.

The network of corridors and walled-off spaces extends for over 3.5 acres and is a “monument within a monument,” as the brand referred to it in a statement. The hypogea includes some particularly significant examples of Roman technology. As the space was also used to corral the wild animals and stage equipment used in the gladiators’ shows, it was furnished with mobile platforms and hand-operated wooden elevators to transport the heavy cargo into the arena. Twenty-four of the former and 28 of the latter are now on view.

This second phase took four years of work by 81 people, from archaeologists to architects to construction workers. And it’s not the end of Tod’s endeavour—the third and final phase will see the restoration of the Colosseum’s second tier, overall structural reinforcement and the completion of a new visitor centre.

Those final touches may be a few years away, but this never-before-seen level of the Eternal City’s most enduring landmark is ready just in time for vaccinated travellers to enjoy a Roman holiday this summer.