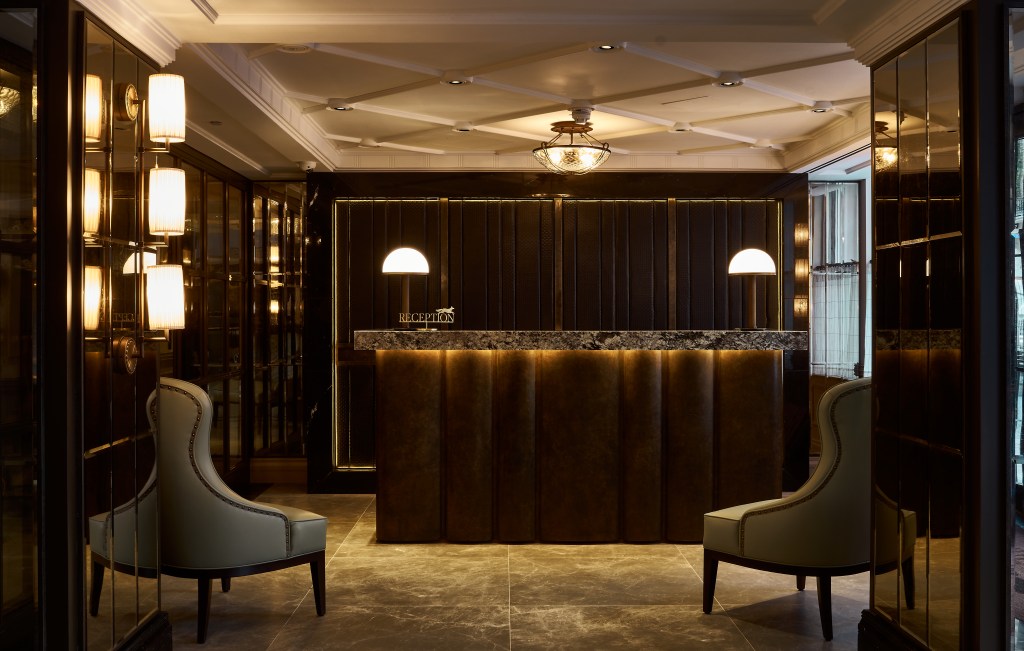 One of the first objects to which the eye is drawn, entering the marble but largely unfussy lobby of the newly opened Mayfair Townhouse, is a life-size peacock, encrusted with 25,000 Swarovski crystals, created by Colombian artist Clarita Brinkerhoff. Which is apposite, given that the fifth hotel opening from the hospitality group behind Cliveden House and Chewton Glen evokes the spirit of the male peafowl with no little gusto.

Occupying the dead centre of a Half Moon Street – which runs between Green Park and Curzon Street, and was named after a nearby pub whose bawdy heyday was when this district was more a hangout for dandy bohemians rather than retail pilgrims – Mayfair Townhouse is a new addition to London’s hospitality scene from Iconic Luxury Hotels: the British group whose domestic portfolio includes Cliveden House, Chewton Glen, The Lygon Arms and 11 Cadogan Gardens.

Goddard Littlefair is the Illustrious interior design firm who have linked together the Georgian townhouses (15 of them, despite the singular noun of the hotel’s name, seven of them grade II listed), combining wefts of English eccentricity with warps of Georgian styling to create a quirkily residential aesthetic tapestry throughout. The hotel contains 172 rooms and suites – including modern suites with their own private patio – whose matte hues contrast as elegantly as those of the complementary macarons found next to the Jarr Kombucha tea on the dressing tables.

The interiors of the three Signature Suites, meanwhile – The Skylight Suite, The Fifth Floor Suite and The Loft Suite – mimic the lustrously decadent lifestyle of the hotel’s surrounds, in particular the eras when two literary heroes, actual and fictional, frequented them: respectively, Oscar Wilde (Half Moon Street is where The Importance of Being Earnest is set) and Bertie Wooster, who would retire to his flat here after frivolities at the nearby Drones Club. The three suites, meanwhile, contain covert English gardens said to be inspired by Cecil Beaton’s.

Nods to Oscar Wilde elsewhere include quotes scrawled on guest room mirrors and the drinks menu in the glass-and-gold-themed, private-club-like Dandy Bar, where AR Lenoble Brut Champagne (Wilde’s favourite) is a major ingredient in many of the cocktails, one of which is named after his sometime beau, Lord Alfred “Bosie” Douglas; another, Green Carnation, is named after one of Wilde’s trademark stylistic flourishes. Tier two status has tempered The Dandy Bar’s atmosphere a tad during Robb Report’s visit, but it will surely become a big hitter on Mayfair’s fashionable drinking circuit when normality resumes.

The hotel promises to become a foodie destination as well as a stylish drinking haunt when pandemic-related restrictions permit, thanks to a forthcoming subterranean restaurant (the baked eggs and chorizo already served there at breakfast was sublime in both texture and taste) and a food-and-drink matching programme which, a chat with Bar Manager Pierpaolo Monaco reveals, is extremely thoughtfully executed. “Our signature Jerusalem Artichoke Salad is best paired with the Chablis Domain D’Elise – the delicate mineral finish of this white wine enhances the herbal and complex notes of this elegant starter,” he tells Robb Report.

“The Mayfair Townhouse’s Lobster Curry – the recipe for which comes from our sister hotel, Chewton Glen in Hampshire – pairs best with the Bordeaux Pomerol: the incredible mix of flavours you get from this velvety and full bodied red makes it one of the only wines rich enough to balance the complexity of the Lobster Curry. Rosella’s Tiramisu – one of General Manager Federico Ciampi’s recipes – is best paired with both Hungarian Tokaj or French Sauternes, as even if they have different notes and richness, the aftertaste supports the sweet and bitter palate you have after this  dessert.” His descriptions, we can confirm, have substance as well as style.

Art aficionados will also flock to The Mayfair Townhouse, thanks to the curation efforts of New York consultant Minda Dowling. Besides the aforementioned peacock sculpture, visitors perusing the premises will also encounter curious pieces such as a portrait of Lord Byron with iPad and earphones by Ant Fox; the wonderfully forbidding ‘Butterfly Catcher’ by Kazakhstani fine-art photographer Svetlana Melik-Nubarova; and pieces by award-winning Brighton-based photographer Miss Aniela. And, indeed, lots of references to the hotel’s totem animal, the fox (a brass vulpine head is found on each bedroom door). So crucial is the artwork contained within to the hotel experience, QR codes have been developed for guests to scan and find out more about each piece).

Baked eggs and chorizo – star of the breakfast menu

With Fortnum & Mason, The Royal Academy of Arts, Burlington Arcade and Hyde Park Corner all in strolling distance, the Mayfair Townhouse couldn’t be better situated: but, particularly in this phase of our lives, it’s what lies within that makes Mayfair Townhouse one of the most enticing new additions to the capital’s hospitality repertoire.

See below for more pictures of The Mayfair Townhouse