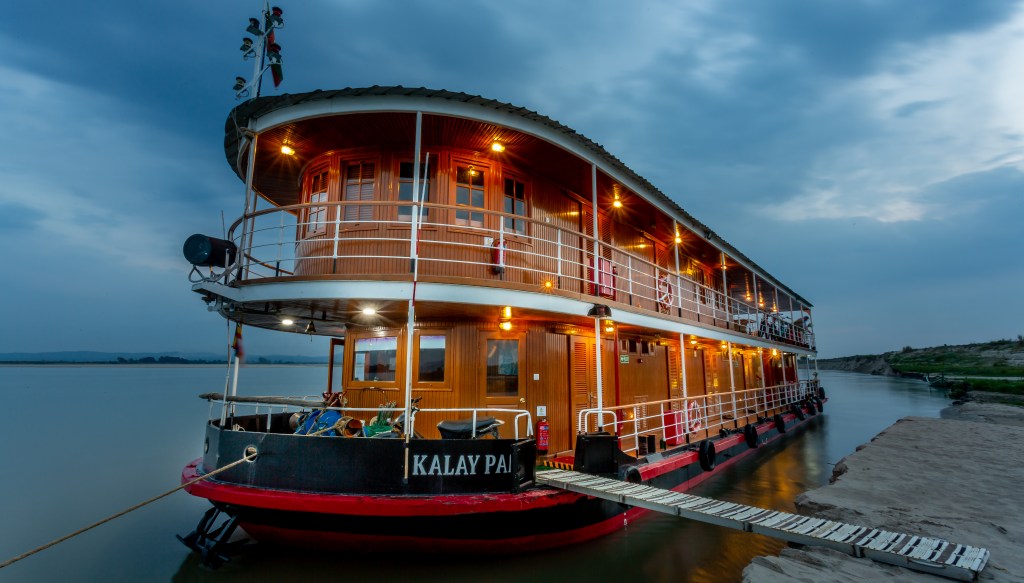 Always the epitome of Far-East-based luxury, Pandaw has announced its new Pandaw Suite Collection, with double-size suites now available aboard its larger P Class ships in Vietnam, Cambodia, India, Laos and Myanmar. Replete with brass-and-teak opulence, these new spacious quarters, measuring 336 square feet, include private balconies and lounges and come with a host of additional benefits, including in-suite butler service and the attentions of  Pandaw’s on-board therapists.

Pandaw was the idea of a Scotsman: historian and philanthropist Paul Strachan, who almost single-handedly pioneered tourism in Myanmar, formerly Burma, by reviving the Irrawaddy Flotilla Company, fifty years after its 650- strong fleet was scuttled shortly after the Japanese invasion. “In the old days when Scots captained Burma’s famous stern-wheeler paddleboat fleet, one telegraph was sent back to the UK every week from Rangoon,” he says. “One line: the takings!”

The IFC was owned by Scottish teak merchants TD Findlay & Sons, and managed by Paddy Henderson from Glasgow. Peter Denny of Dumbarton built the shallow draught ships, and sandbanks along 1,350-mile river still bear names like ‘Macfarlane’s Folly’. “The greatest river fleet on Earth”, as it was then known, operated from 1865 until the late 1940s. At its peak in the late 1920s, it carried 9m passengers and 1¼ million tons of cargo a year. Including elephants. And royalty (in 1910, the couple who would become King George V and Queen Mary did the cruise). The steamers were licensed to carry 4,000 passengers – twice as many as the Titanic.

Although registered in Glasgow, the operational headquarters were in Rangoon (now Yangon) with a shipyard across the river at Dalla. The boats were vital to the oil fields upriver at Chauk and Yenangyaung. The steamers, though, were built in Scotland before being dismantled and transported to Burma for reassembly.

When Strachan found the rotting hull of the “Pandaw” boat in the river known as ‘The Ganges of Burma’ – the spiritual artery of the country, bisecting it from north to south – then discovered it was made on the Clyde by Yarrows of Glasgow, Pandaw Cruises was born. Now, it operates a fleet of seventeen two-to-three-tier boutique luxury ships, made in Vietnam, offering cruises there as well as in Laos and Cambodia.

The cruises, in Strachan’s words, are aimed  at “intrepid travellers, willing to forgo connectivity for adventures, happy to be entertained by their surroundings and assured of a luxurious, congenial, unforgettable experience”.  No two voyages being the same, repeat custom makes up fifty percent of bookings, and passengers from all round the world contribute to healthcare and education programmes around Myanmar and elsewhere.

“Thomas Cook first offered holidays to Burma in 1910,” explains Strachan. “You had [George] Orwell and [Somerset] Maugham’s PR -street hawkers still sell copies of Burmese Days. Burma was the place to visit. We were the first since the Second World War to offer cruises on  the Irrawaddy River [‘river of the elephant’ in Hindi), reaching Bhamo, about 1,000 miles from the sea, and went on to be the first on the Chindwin river. In 2009 we cruised the Ranang in Borneo, and in 2015 Vietnam’s Red River.”

Strachan, now based in Perth, spent a year in Burma while an apprentice at John Brown Engineering, building a turbine. After reading history at Bristol and furthering his Burmese language studies at the University of London’s  School of Oriental and African Studies, he returned to live in a monastery in Mandalay to write his first book: Pagan: Art and Architecture.

During the military junta which ruled the country with ruthless repression from 1962, Burma (as it was then widely known) was closed off to the rest of the world, as well as vital tourism revenue. For a period, Strahan found himself on a visa blacklist but was able, in 1995, to arrange a voyage on the Irrawaddy Princess, intended to reintroduce cruises on the river to foreign tourists. His plan was a huge success: the thirty cabins quickly sold out for the next and two subsequent cruises that year, and the three the following year. “Then came the realisation that neither of us had ever been on a cruise and knew nothing of ship, hotel or tour management,” he says. “We promptly took a Nile cruise and returned with a list of ‘do-nots’ that we’ve stuck to ever since.”

Not only was the Irrawaddy uncharted, but the ship was ill-designed, its crew inexperienced and there was corruption, black market trading, monsoons, mistakes and misjudgements, mosquitoes and major technical and administrative teething problems to contend with. At one point the galley fell off the back of one ship, disappearing downriver. Now, though, the firm originally named The Irrawaddy Flotilla Company (in honour of the Glasgow-based firm that once ran Burma’s river transport), now trading under the name Pandaw (after the Clyde-built paddle steamer it restored in Burma), is thriving.

Strachan – who has adopted a Burmese orphan, Antoni – is adamant that charity remain at the heart of the company. “Myanmar has given me so much, so I wanted to give something back,” he says. “We opened a clinic in Pagan in 2014, on land loaned by a Buddhist monk, and we now have X ray facilities, a diagnostic lab and ultrasound room. We have 12 schools in remote villages and riverine islands. We now have seven clinics already up and running. This year saw us hit our 300,00th patient treatment since inception in 2010. Despite all the dramas  and problems the country has faced and still faces, we’re still alive and kicking.”

All medications are provided for free. “Our Balin Clinic receives several hundred patients a day. They queue to get in.  All our initiatives need money to keep going, and it’s mostly paid for by our passengers who know they’re paying for much more than the luxury – for the air conditioning, the WCs, the L’Occitane toiletries and high-quality three meals a day cuisine. We recruit all our crews from local communities.”

When, in May 2008, Cyclone Nargis left 150,000 killed and 2.5 million homeless in Myanmar, there was no Western Aid agency in the former pariah state. Working with a British medical charity, Strachan converted his fleet into hospital ships, turning dining rooms into operating theatres. Thevida Buddhists monks were recruited  and put on the pay roll to distribute rice. Pandaw also supports  two orphanages  and a hospice in Mandalay inspired by the work of English pioneer Dame Cicely Saunders. “We’ve also helped people who lost their livelihoods and livestock in flood,” Strachan says. “One of our boats sailed a 127-mile stretch of the river between Shwe Sar Yae and Kalewa dispersing US$10k’s worth of medical treatments. Thousands received aid.

“The generosity of past passengers has helped meet such emergencies and hopefully will continue to meet future ones.”

Click here to find out more about Pandaw’s charitable efforts