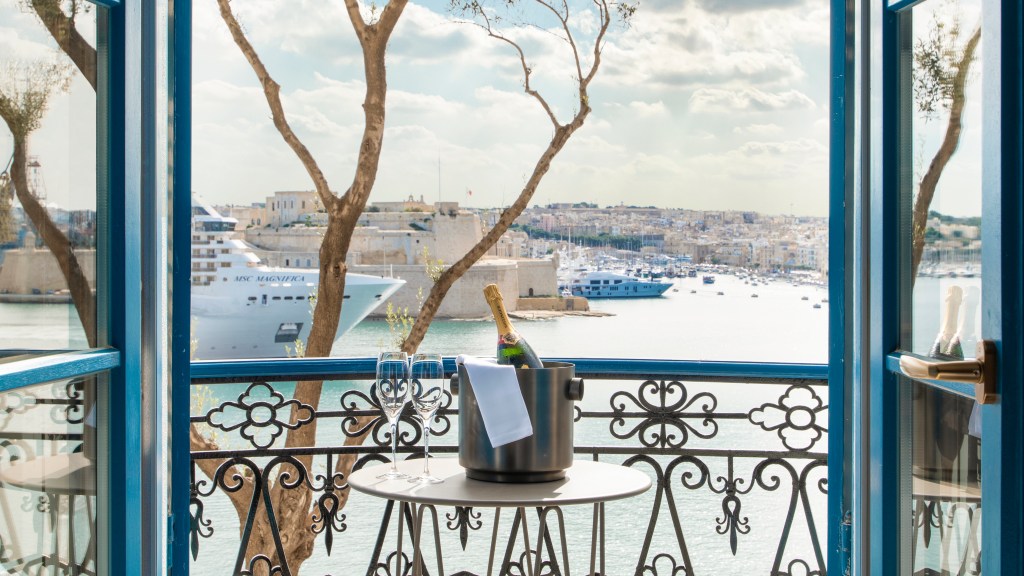 When Iniala Beach House opened in Phuket a few years ago, it fast became the talk of Asia, not just because of its flawless location on the golden sands of Natai Beach, but also for its surreal, futuristic architecture and show-stopping interiors by no less than 10 of the world’s most coveted designers – including the Campana Brothers and Jaime Hayon among others.

Now, its founder, British philanthropist Mark Weingard, has set his sights on Malta with the opening of Iniala Harbour House & Residences. Perched in a prime location on St. Barbara Bastion, overlooking the spectacular yacht-speckled Grand Harbour and beyond that the golden tumble of the Three Cities, the property occupies three 19th-century buildings that were snapped up by Weingard over a period of years. These have now been stitched together resulting in a quirky structural flow that unfolds to include 23 rooms and suites, a fine dining rooftop restaurant, a cosy members-and-residents-only bar in one of the building’s original vaults and a sprawling subterranean spa and pool. There is also The Hideaway, a two-room, two-suite guesthouse a few doors down the road.

The interiors this time are the work of just three designers – local firm DAAA HAUS, Spain’s A-Cero and Istanbul-based firm Autoban – who have come together to lavish the spaces with an eclectic mix of concepts that cohesively reflect Valletta’s heritage and charm. For example,  Autoban, who is behind  the rooms in The House, took its cues from both the building and the island’s rich history while layering its signature, rich contemporary touch.

“The story at Iniala is all about celebrating contemporary design while respecting a historical context,” say the designers. As such, an earthy, organic colour palette inspired by the golden sandy tones of Valletta is revealed through plush natural materials – like marbles, timbers and brushed metal details – softly curved bespoke furnishings and standout wallpaper made from photographs that reflects atmospheric scenes of Valletta. The Grand Residence, meanwhile, has what Autoban calls the ‘Dream Bed’, which features a bronze laser cut headboard depicting silhouettes of birds and sunflowers. “The room is meant to be a dreamy and lavish sanctuary that will provide an unforgettable stay.”

Elsewhere, the artwork, which has been curated by consultant Maria Galea, takes centre stage. Featuring a mixture of site specific pieces along with existing collections from some of Malta’s most renowned artists, you’ll find, among other works, a sculpture by local ceramicist Paul Scerri, pieces by Gozitan artist Victor Agius, and paintings by Andrew Diacono, which can be found beneath a dramatic hand-painted ceiling fresco above the hotel’s grand staircase. “Throughout the pandemic, Iniala launched an open call for proposals, in aid to support local artists during challenging circumstances,” explains Galea. “Each piece has been specifically selected to fit within the aesthetic and concept of the space.

The crowning glory is ION, the hotel’s rooftop bar and restaurant. Here, as part of a 100-day residency, chef Alex Dilling – previously from The Greenhouse, a two Michelin starred restaurant in London – sends out pretty, precise plates that make the most of local, seasonal ingredients. Expect inventive and deceptively simple dishes like the caviar and marinated pink shrimp topped with a dollop of crème cru, alongside his signature plates such as the indulgent gold leaf-flecked Andignac Foie Gras with black truffle.

The harbour view from ION

The arrival of Dilling is further proof of Weingard’s mission to raise the bar in Malta’s hospitality scene. “We want to provide a high-end hotel for travellers who are into culture, who are adventurous, looking to discover and most of all, want to have fun,” says Weingard. Indeed, while the island has its share of lovely hotels, Iniala Harbour House & Residences is certainly setting a new standard and is well on its way to putting this beautiful and alluring Mediterranean island on the luxury hospitality map.

Suites at Iniala Harbour House (www.inialamalta.com) start at €350 per night per room. Air Malta (www.airmalta.com) flies the new A320neo from London Heathrow to Malta six times a week. Find out more about Malta at http://www.visitmalta.com