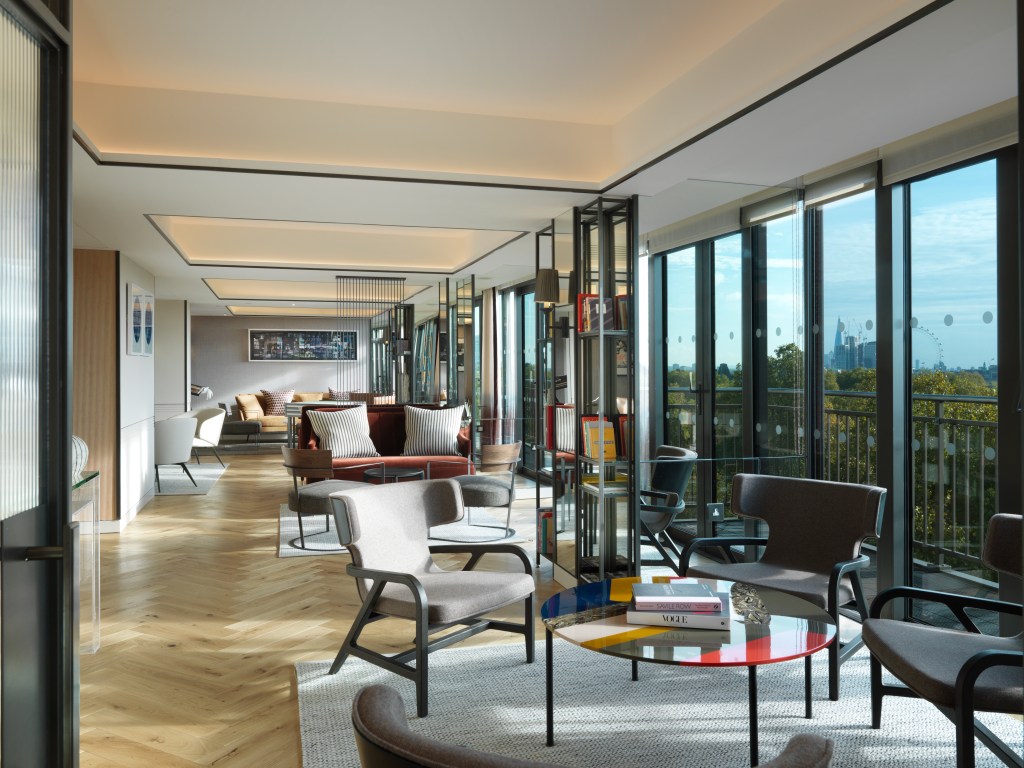 Given The Athenaeum Hotel’s lofty nickname – “The Grande Dame of Piccadilly” – taking on a comprehensive renovation could be a daunting task: not so award-winning designer Martin Hulbert, whose revamp to the five-star hotel and residences has transformed all ten floors – making 134 new bedrooms, 10 new suites and a new guest destination: “The View’’, a members-style club accessible to hotel guests only, and formerly the hotel’s penthouse.

Anyone who’s stayed at the Athenaeum before – and their numbers include Elizabeth Taylor, Christian Bale, Harry Styles, Samuel L Jackson and Natalie Portman – might be surprised that a revamp was felt needed: the rooms were already capacious, luxurious modish but with all the old-school swagger that made it fit in comfortably with its Mayfair surrounds. Now, though, Superior, Deluxe, Park View bedrooms and Suites have been repurposed with a view to reminding the occupant of the prestigious spot in which they’re going to lay their head that evening. 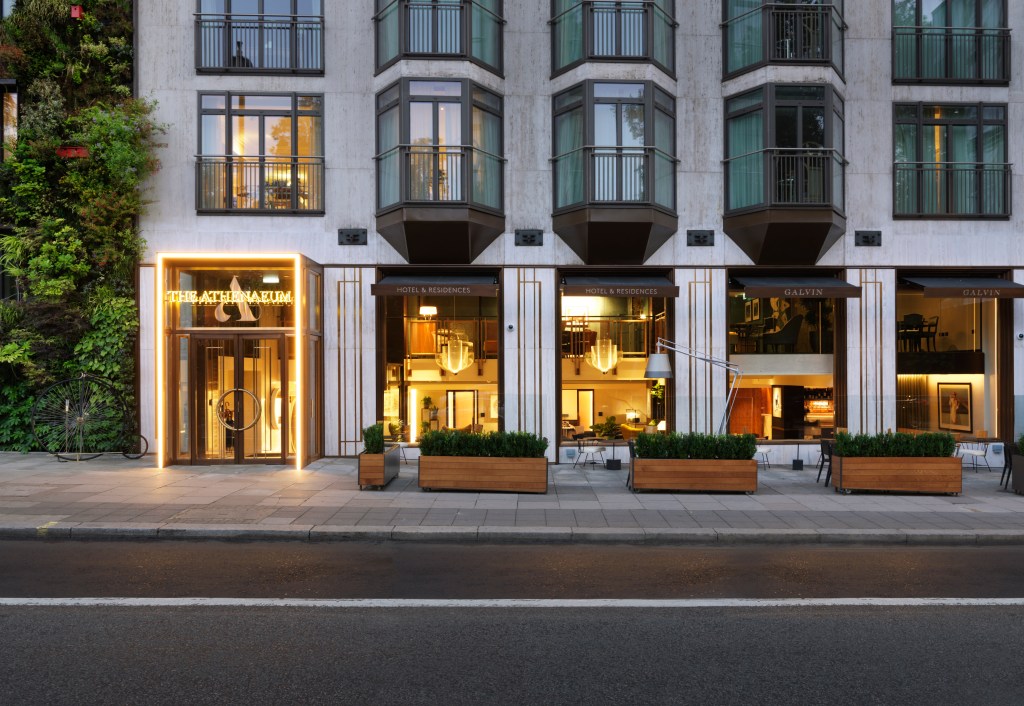 Floor-to-ceiling windows now bathe the room in light during the day while enabling guests to gaze straight over Green Park, towards a post-card-like silhouetted skyline of London’s skyline once dusk hits. Lighting and considered application of colour enhances what are already pretty generous interior spaces, while reminders of British craftsmanship jump out from every classic Herringbone weave, linen-lined wardrobe, silk-clad furniture piece and velvet cushion.

But, aside from the main bar – a spectacular, alcove-flanked hideaway, newly reimagined by Kinnersley Kent Design, with wonderful jewel toned chairs – it’s The View that regular visitors will deem to be the revamp’s biggest talking point. Inspired, via the works of Lewis Carroll, by the notion of a rabbit hole – as in a venture into a magical unknown – guests will find surprise experiences such as G&T masterclasses, mindfulness sessions or a simple complimentary tipple with canapes created by the hotel’s Michelin-starred London chefs, brothers Chris and Jeff Galvin. 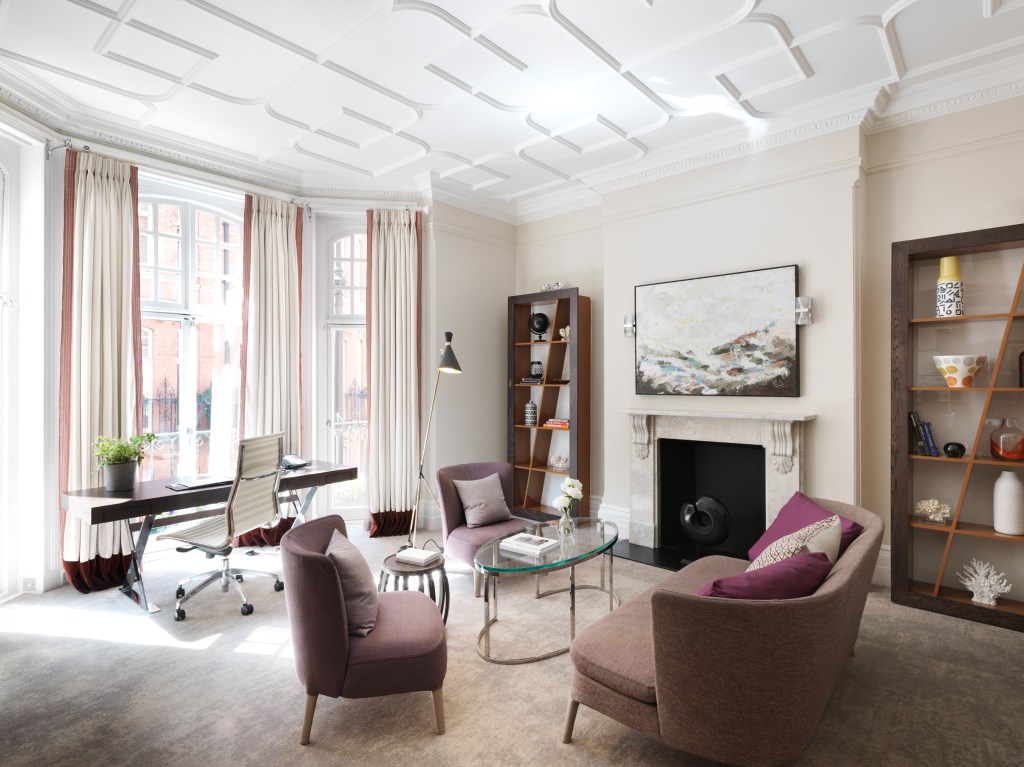 Happily, the new attention on authentically local aesthetics hasn’t come at the expense of the Athenaeum’s traditional charms. The Galvins have chosen to go with the hotel’s new “in situ” ethos by replacing their French-inspired repertoire in place of one which utilises Britain’s homegrown produce (the festive afternoon tea typifies the newfound domestic loyalty, with all ingredients supplied by royal warrant holders such as Tate and Lyle, Dukeshill Ham Co Ltd, Darvilles of Windsor, Coleman’s H. Forman and Son and The Bread Factory).

The hotel has also preserved what is one of its more remarkable traits for a London hotel, likely to be inhabited by guests, Hollywood nobility included, who are in London for professional reasons – an impressive level of child friendliness. Notify the staff in advance that your young offspring will be occupying the suite’s second bedroom, and they’ll find a beautifully appointed toy box on arrival.

The Athenaeum is a building that is packed with cultural and pop-cultural folklore: Charles Dickens was fond of its extravagant interiors; Steven Spielberg edited E.T., Close Encounters and Raiders of the Lost Ark ensconced in its plush suites; Russell Crowe was once gently but brusquely admonished for leaving his room untidy.

Whatever new folklore unfurls itself within these hallowed walls in the coming decades, it’ll be doing so in perhaps the most elegant hospitality surrounds this salubrious neighbourhood now has to offer.

Luxury suites at The Athenaeum start from £597 per night. athenaeumhotel.com 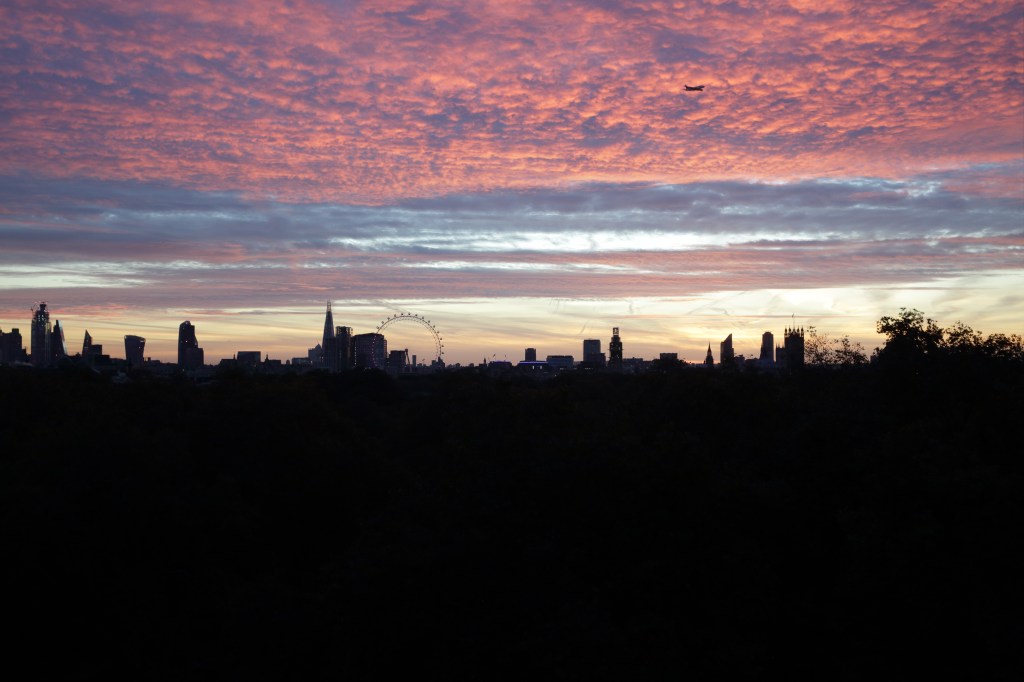