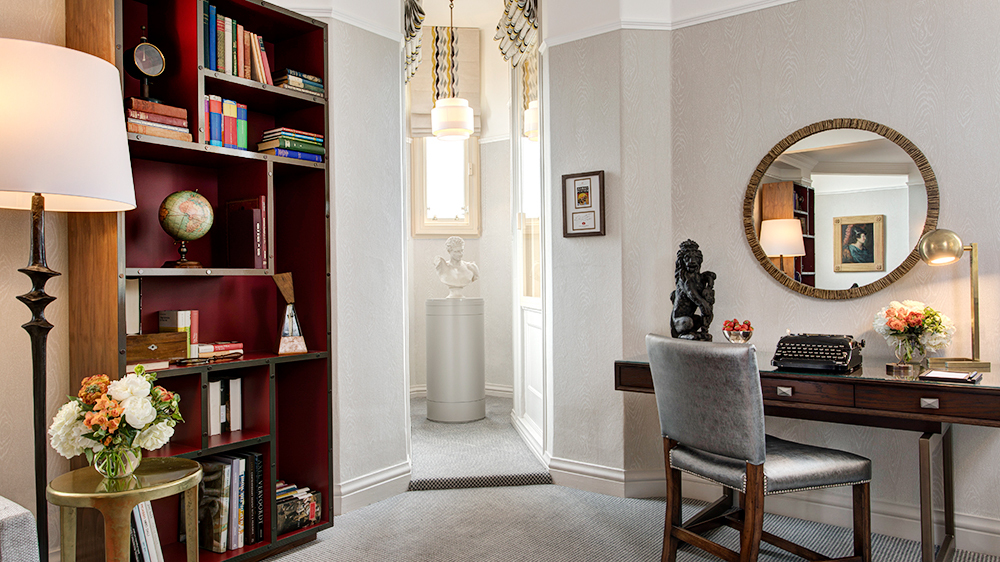 When J.K. Rowling released Harry Potter and the Philospher’s Stone in 1997, the story of an orphaned boy unaware of his complicated relationship to a magical world immediately captivated the attention (and imaginations) of pre-teens and adults alike. Since then, more than half a billion people have purchased a book from the wildly popular series.

Rowling spent much of her time writing in Edinburgh and completed the heptalogy’s final novel at the Balmoral in 2007. The iconic Rocco Forte–owned hotel—known for its clock that’s set three minutes fast to help travellers catch their trains at Waverley Station—underwent a multimillion-dollar renovation a decade later and dubbed the room where the author stayed as the J.K. Rowling Suite. The desk she used remains in the quarters, as does the marble bust of Hermes that Rowling signed upon finishing Harry Potter and the Deathly Hallows. The space, however, goes far beyond just being a homage to Rowling’s stay; look a little closer and you’ll find more details that reference her beloved work.

It all starts with the door: Numbered 552 3/4, the fraction references the platform Hogwarts students must arrive on in order to board the train to their school of wizardry and witchcraft. It’s also painted purple, a significant colour for the fantastical realm, and adorned with an owl knocker, a nod to the bird’s prevalence in the series, including Hedwig himself. Inside there’s an overall woodland theme, complete with wallpaper that features sketches of bare trees and tables with branch-like legs, an ode to the final volume and the Forbidden Forest. There’s even a statuette of a stag, which could either allude to Harry’s Patronus or his father’s Animagus form. And if you really want to relive it all, copies of Harry Potter line the living room’s bookshelf. It’s the perfect suite for Potterheads to call home base as they explore the Scottish capital and all the locations that inspired the famous author. If we haven’t geeked out too much on you already, check out more photos of the literary suite below.

The J.K. Rowling Suite includes the author’s desk. Photo: Courtesy of the Balmoral

Details from the Balmoral’s J.K. Rowling Suite, including a signed bust of Hermes at the entrance (left). Photo: Courtesy of the Balmoral

The bedroom in the J.K. Rowling Suite. Photo: Courtesy of the Balmoral