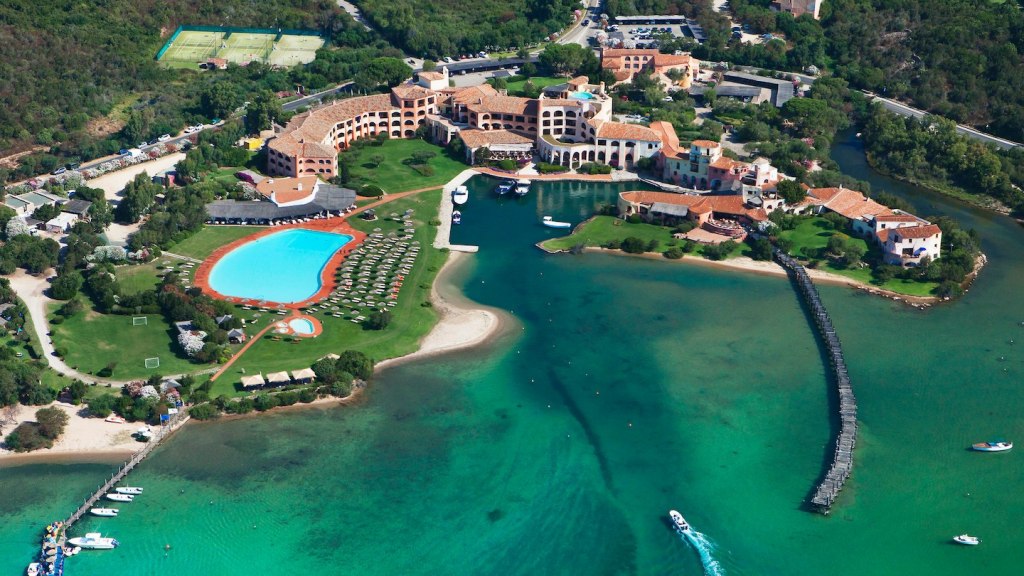 James Bond loves a good hotel. Whether seducing the enemy’s wife at the Hotel Atlantic Kempinski or foiling Goldfinger’s villainous plans at the Fontainebleau Miami Beach, 007 always seems to find some action in the lap of luxury. Lucky for the rest of us, these opulent hotels are still around, allowing regular Joes to sip dry martinis and outsmart villains — or just sit by the pool and hang out — themselves. Read on for 10 of the best Bond-approved haunts around the world.

In 1974’s The Man with the Golden Gun, Bond (played by Roger Moore) attempts to track Scaramanga’s mistress Andrea Anders as she wends through the streets of Hong Kong in a green Rolls-Royce. “A green Rolls-Royce,” he tells his assistant, Goodnight. “There can’t be that many in Hong Kong.” Of course, Goodnight informs Bond that, in fact, the Peninsula Hong Kong has an entire fleet of the emerald beauties.

Bond checks into the hotel and later breaks into Anders’s hotel room to discover that she is smuggling bullets for Scaramanga. She returns the favour by then breaking into his room when he is about to rendezvous with Goodnight. Pushing Goodnight into a wardrobe, he romances Anders, who later turns up dead at a Thai boxing match in Bangkok. While the interior scenes were not shot in the hotel, the cast stayed there during filming — and the Peninsula-green Rolls-Royces are still available to guests for jaunts around Hong Kong.

When Daniel Craig and his blue swim trunks emerge from the sea in 2006’s Casino Royale, it is at the Ocean Club on Paradise Island. The beachfront Bahamian resort appears throughout the film: Bond is seen walking through the reception area after setting off all the car alarms in the parking lot, playing poker in the library, where he wins an Aston Martin DB5; and exploring the Versailles-themed gardens.

Today, the hotel, which has been rebranded as the Ocean Club, a Four Seasons Resort, honours 007 by serving the Casino Royale cocktail (vodka and gin with a splash of Lillet) in the bar. Guests can stay in the same room as Bond did, too: Villa 108. One place you won’t want to follow the international agent, however, is to the door he passes through to get to the hotel’s “security room.” In real life, it’s actually a broom closet.

Though Montenegro was the fictional setting for Casino Royale, none of the movie was actually shot there. The Hotel Splendide — the grand hotel where 007 plays a high-stakes poker game with Le Chiffre and Vesper Lynd — is, in real life, the Grand Hotel Pupp, located 1,287km away in the Czech spa resort of Karlovy Vary. In the scene, Bond and Vesper check in and kill two terrorists before enjoying a romantic meal in the hotel’s ornate dining room. Meanwhile, Mathis, a fellow MI6 agent, puts the dead terrorists in the trunk of the car of one of Le Chiffre’s henchman. The thug is later arrested for the crime in the hotel parking lot, with Mathis and Bond watching from a hotel balcony. Director Martin Campbell joked, “I have never been in Montenegro, but I hope that now their tourism will erupt.” And sure enough, it did.

It’s somewhat surprising that such a quintessentially British hotel — London’s first grand hotel and the place where traditional afternoon tea was founded — would be cast as Russia’s Grand Hotel Europe. But 1995’s GoldenEye did just that, replacing the Union Jack with a Russian flag at the entrance of The Langham, London for full effect. In the scene filmed there, Bond — played by Pierce Brosnan — nearly falls victim to Xenia Onatopp, a member of the Janus crime syndicate who tries to seduce and kill him. Today, whether you have a gaggle of spies in tow or not, be sure head to the Langham’s glamorous Artesian Bar and order the Information (To Share), a cocktail made with vodka, amber vermouth, gentian, and citrus.

Designed by architect Morris Lapidus, the founding father of “Miami Modern,” the legendary Fontainebleau is the stylish setting for the opening scene of 1964’s Goldfinger. As the credits fade, the camera pans across the hotel’s pearl-white curved façade, then zooms down on its glamorous pool, where Bond, played by the inimitable Sean Connery, is getting a massage from a pretty blonde.

Later we encounter the villain Goldfinger, lazing by the pool in his gilded robe and cheating at a game of poker with an unsuspecting hotel guest. But Bond foils the ruse by breaking into the villain’s suite and turning off the microphone that Jill Masterson is using (along with a pair of super-strong binoculars) to feed Goldfinger information about his opponent’s hand. Of course, Bond then seduces Masterson, who later turns up dead — asphyxiated after being covered in gold paint.

In 1997’s Tomorrow Never Dies, Bond (played by Pierce Brosnan) is sent to Hamburg’s lavish Hotel Atlantic Kempinski to stop Elliot Carver, an insane media mogul, from initiating World War III. Bond checks into the hotel, where he first seduces Carver’s wife, who — surprise — is later killed by her husband’s personal assassin, Dr Kaufman. This leads to the movie’s most memorable scene where Bond climbs from the Atlantic Suite to the globe on the hotel’s rooftop. Interestingly, a stunt double filmed the scene because, unlike the real 007, Brosnan is afraid of heights.

In 1977’s The Spy Who Loved Me, Bond (played by Roger Moore) and Anya Amasova hop into a white Lotus Esprit and drive to Sardinia’s lavish Hotel Cala di Volpe, built in the 1960s by the Aga Khan. The pair walks through the lobby and checks into “Suite A5, a sitting room with two bedrooms”. In actuality, the luxurious suite is actually one of the hotel’s bars, so it’s easy to visit it and enjoy a cocktail overlooking the stunning bay. The hotel can also be seen when the couple drive away in the Lotus enroute to the over-the-top car chase that ends with the Lotus morphing into a submarine before reappearing on a nearby beach.

Before her speech to the European Space Commission in 1979’s Moonraker, Dr Holly Goodhead stays in the lavish Suite del Doge at the Hotel Danieli. Bond, played by Roger Moore, seduces her in her room with the line, “Bollinger? If it is a ‘69, you were expecting me.” (Needless to say, it is.) Venice also figured prominently in 1963’s From Russia with Love. In that film, Sean Connery’s Bond also stays at the Danieli.

Udaipur’s floating Taj Lake Palace serves as the superbly over-the-top lair of Octopussy in 1983’s Octopussy. Bond (played by Roger Moore) sneaks onto the manmade isle — which seems to be inhabited only by beautiful women — by swimming to it in an improbable crocodile-shaped boat for one. There he discovers Octopussy skinny dipping and later surprises the beautiful villain by sneaking into her bedroom. Honour the late Sir Roger Moore by enjoying a cocktail in the Taj Lake Palace’s ornate, marble-decorated Amrit Sagar bar — the same place where Bond enjoyed a martini or two.

Australian actor George Lazenby’s only stint as Bond — 1969’s On Her Majesty’s Secret Service — includes a scene in which 007 pulls up to Portugal’s Palácio Estoril in an olive-green Aston Martin DBS. “Everything seems up to the Palácio’s usual high standards,” Bond says as he checks in to Room 516. Interestingly, the film used actual hotel employees in this scene: The bellboy who gives Bond his room key, a shy 18-year-old with brown hair, is José Diogo Vieira, who nearly 50 years later is the Palácio’s concierge. The hotel, an Allied headquarters frequented by spies during World War II, is also where Bond creator Ian Fleming saw a card game between enemy agents that inspired the plot of his first novel, Casino Royale.