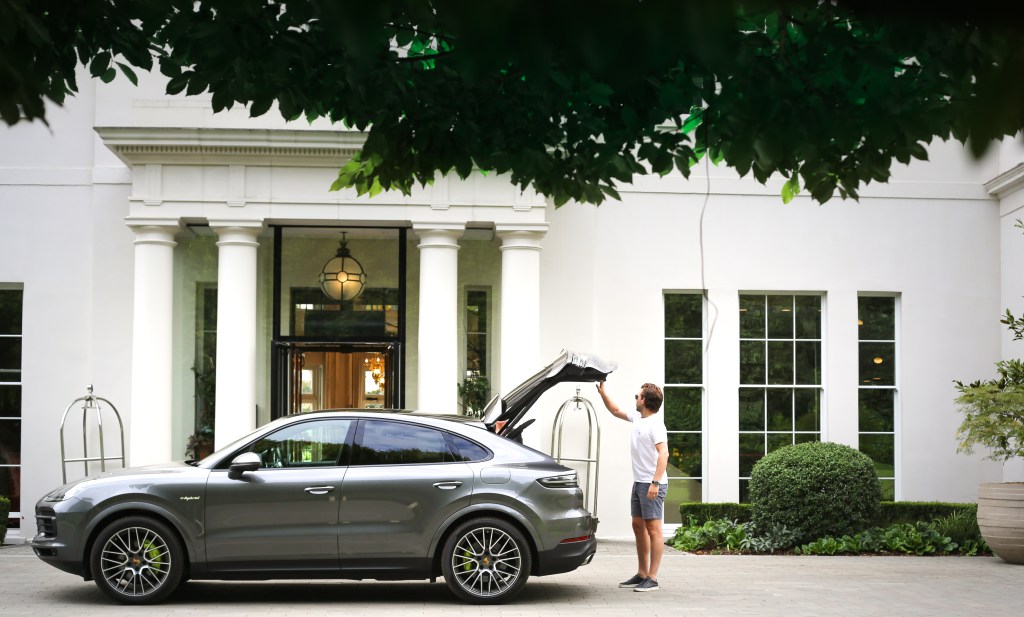 This has been a difficult year; an unprecedented and strange year. We’ve been stuck in our homes, stuck in our gardens or stuck working from a new office that bears a striking resemblance to our teenage bedrooms. As the lockdown finally started to ease, my wife and I dreamt daily of our first opportunity to evacuate anxious London and our first floor flat, and rest our heads on different pillows – to sleep in a bed we won’t have to make and eat food we didn’t have to cook ourselves (I’m assuming we all agree that a Deliveroo order doesn’t count as a real meal, right?)

As someone who grew-up in Berkshire, the well-known names of Ascot, Sunningdale, Wentworth and (oxymoronically named) Cheapside have always conjured up notions of grandiose luxury, aspirational wealth and a level of exclusivity that feels inaccessible. But whilst searching for the perfect place to celebrate our wedding anniversary and find a peaceful haven post lockdown, I was brought to the Coworth Park Hotel: a place synonymous with Polo, Princes and a particularly good spa. 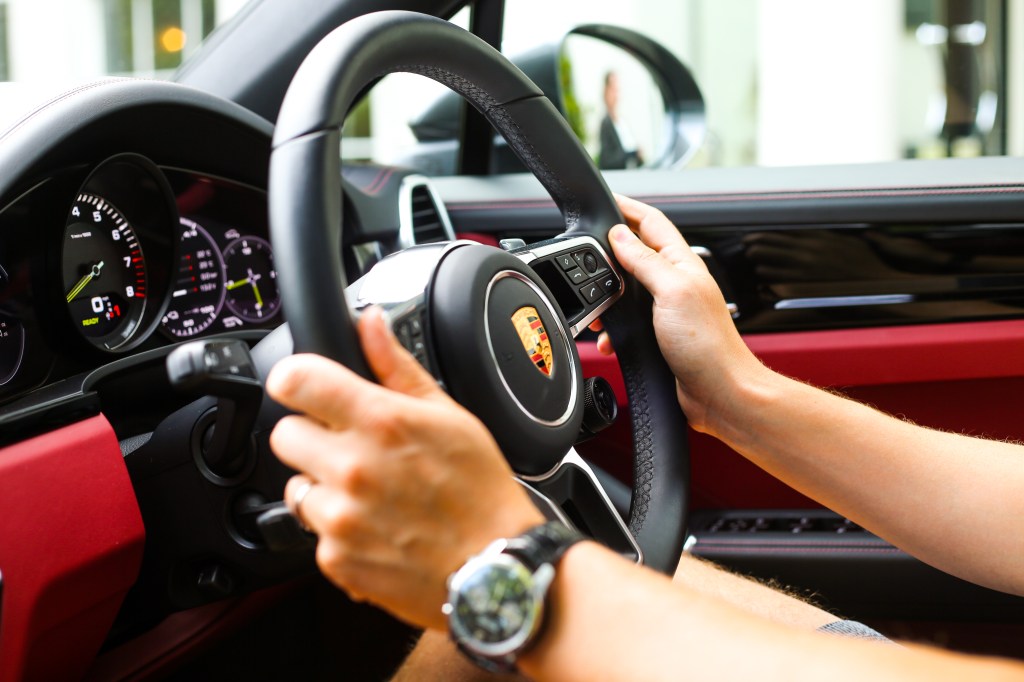 Before I expand on its Royal affiliations, we had to get there somehow and it seemed appropriate to echo the hotel’s eco-credentials – Coworth Park was the first UK hotel of its kind to use a biomass boiler, buried in an underground energy centre that is run by burning willow trees. The trees themselves are grown on the estate, making the hotel nigh on carbon neutral. Although a Porsche 911 Turbo or Mercedes S63 AMG would probably look comfortably at home here, I felt I needed to split the difference in honour of its climate conscious pedigree.

Sticking with the reliable Germans, the lovely people at Porsche were very happy to furnish me with something green from their range. The lengthily named Porsche Cayenne Coupé E-Hybrid was just the ticket (another vehicle seemingly consolidating the fact that an SUV can also, apparently, be a coupé – something I’m still coming to terms with). As I silently pulled up to collect my wife, running on full battery power, she enquired as to whether I’d stalled and was simply coasting in to avoid embarrassment. Do you remember stalling? It seems a torment reserved for driving tests and holiday hire cars nowadays. 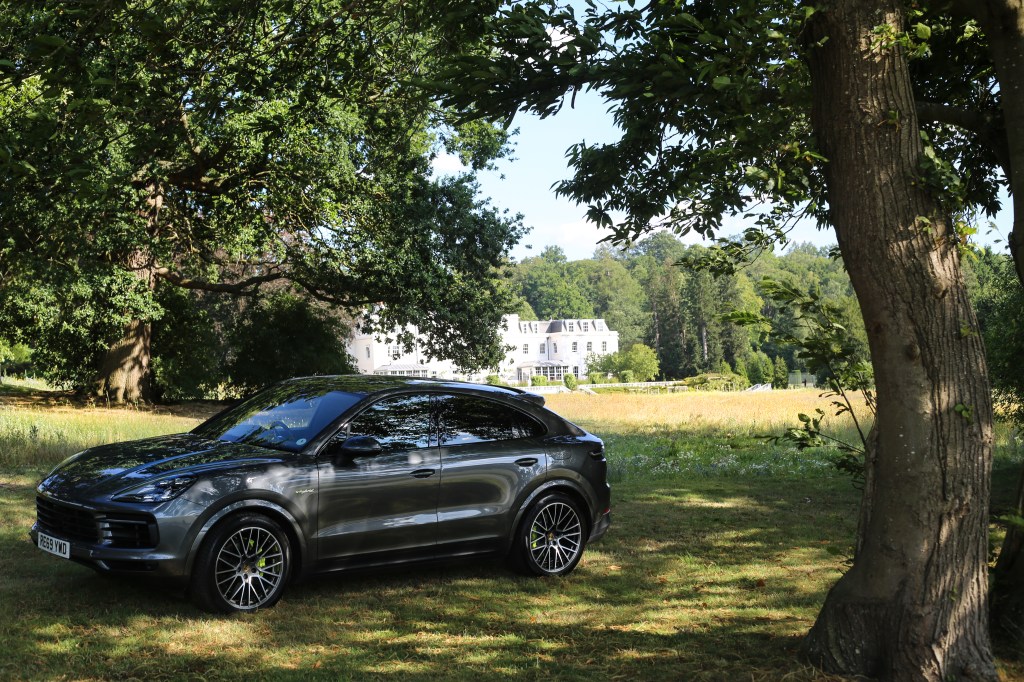 Buffeted by rich red leather from every corner, we cruised down the M4 in search of peace and quiet and hopefully a glass of bubbly or two. The hybrid tech of the Cayenne Coupé E-Hybrid (I think just Cayenne will suffice from now on) is dazzling and terribly impressive – but I’d be a liar if I claimed to understand every word that the very knowledgeable Porsche expert said to me. Suffice to say, the car is so clever that if you have it in the correct setting and put your destination in the satnav it will work out when to use battery and when to use fuel – thereby getting the best of all worlds. One titbit I certainly did get was that the best way to re-charge the battery is to put it Sport+ mode and have a jolly good time. Advice I heeded with ease.

Aside from my momentary mission to charge the battery as quickly as possible, the journey was as easy, restful and as luxurious as you’d expect from Stuttgart’s finest. As for Berkshire’s finest, Coworth Park was built in 1776 and, other than a short spate as a convent school, has been a family home to a few different characters from British history (from a senior East India Company member to the former owner of Selfridges and Fortnum & Mason). It was bought by the Dorchester Collection in 2001 and heavily renovated. 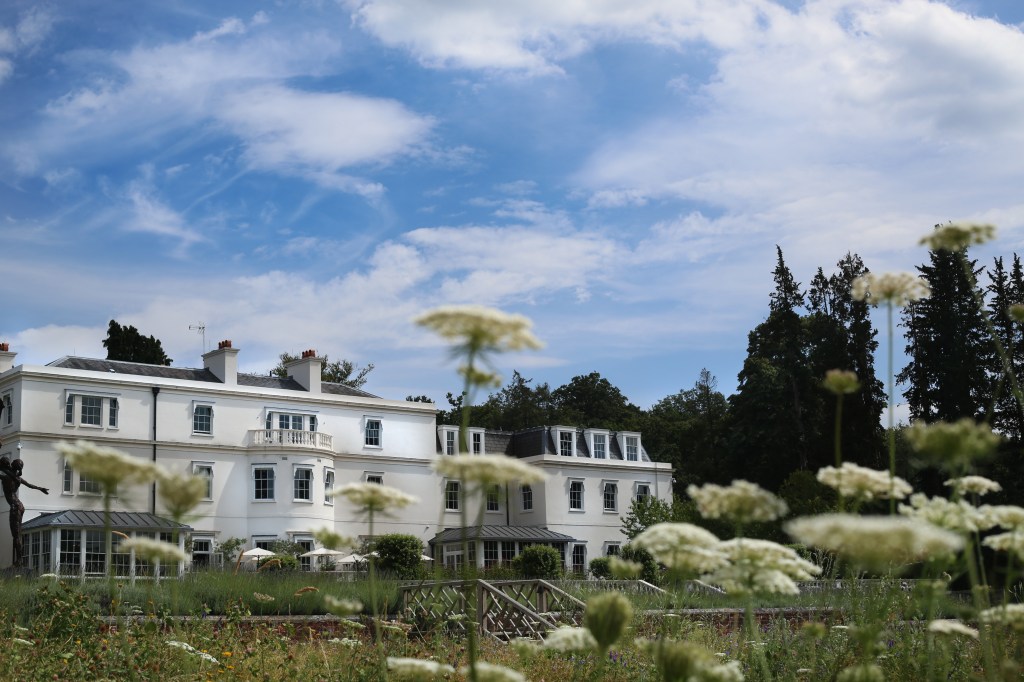 One approaches the grand white house via a gently curving driveway, the stately mansion teasing us occasionally through trees and over hedges – a certain theatricality that wasn’t lost on me. On arrival we were greeted by this place’s real star attraction – its staff. Their warm welcome, attentiveness, positivity and all-round charm was hard to miss. This was certainly the right way to escape the big city.

There were noticeable effects of Covid-19 as we’d expected: masks. Hand sanitiser. Screens. The loss of valet parking is a first-world problem for sure, but something I was happy to embrace as it afforded me more time behind the wheel of this sumptuous leather technological armchair. Parked next to an almost identical Cayenne, a Cayman and a 911 I certainly felt at home (the people of Ascot didn’t disappoint). 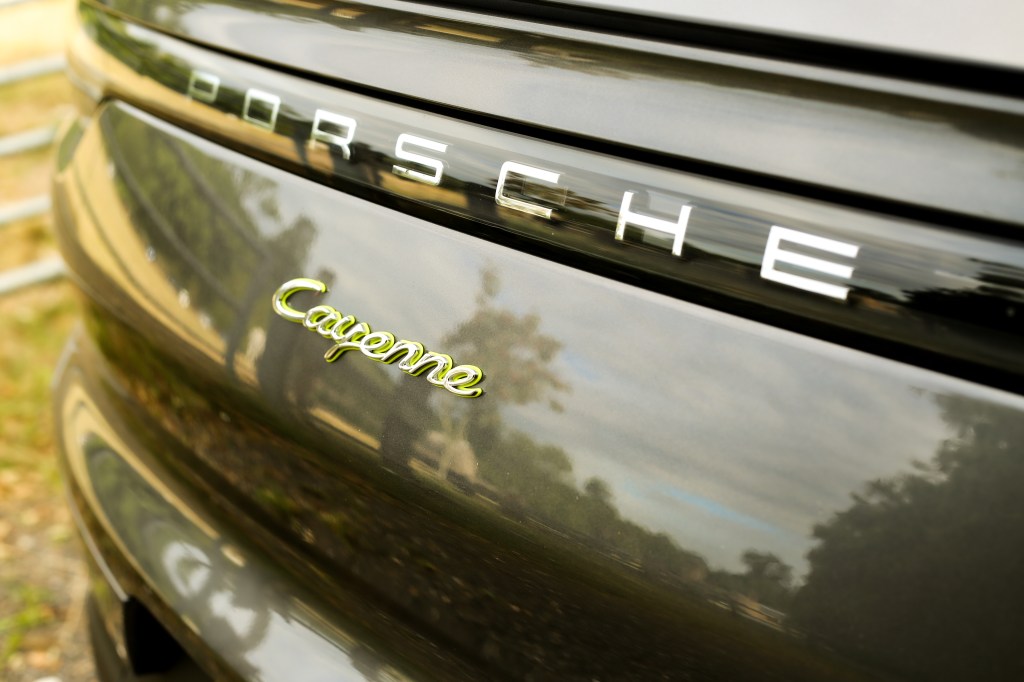 We were guided to our suite by the charming manager, who had the unenviable task of bounding up the stairs whilst we took the lift. The suite itself was, put simply, ridiculous. It was probably larger than our flat, had more marble than Athens and a view that felt like a Constable painting. We did the customary dive headfirst onto the beautiful four-poster, explored every nook and cranny and then decided to get ourselves outside for a toast.

A glass of ice-cold Veuve Cliquot on the terrace at Coworth Park is exactly as decadent and special as expected. We toasted our (so far successful) marriage and took in the colourful wildflower meadow – a unique touch that transports you much further than you’d think, given its Home Counties location.

Sadly – and this is admittedly another first-world problem – the spa wasn’t quite ready for guests as the hotel staff worked to make sure it was Covid-safe so, instead, we simply took a long saunter around the grounds of the hotel and took in the diligently presented polo field that sits opposite the hotel. It’s a genuinely beautiful and tranquil place to be. 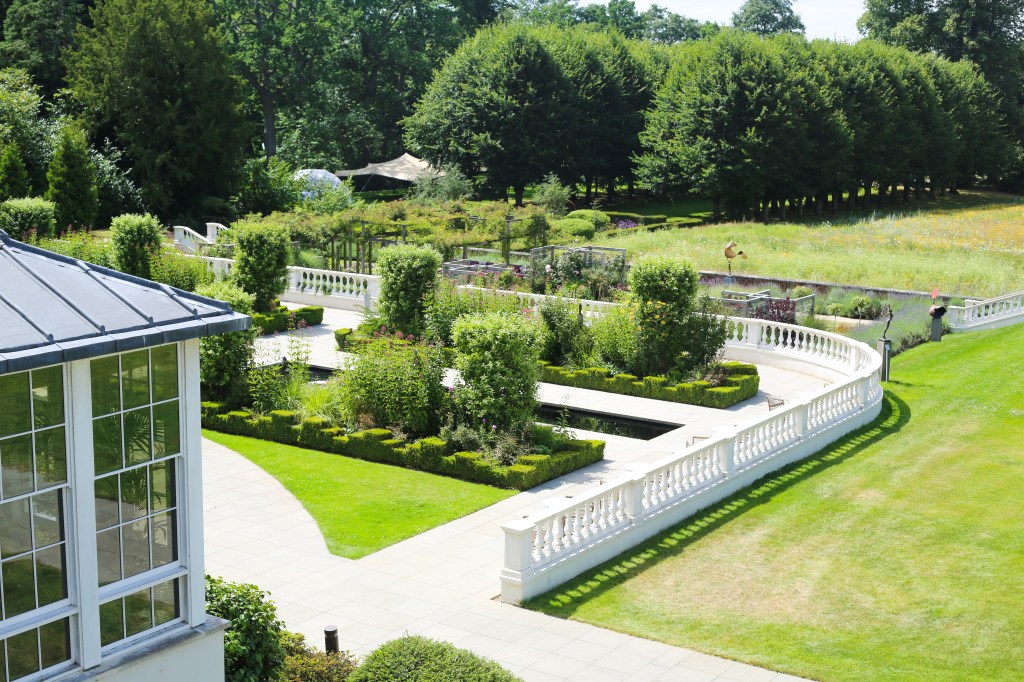 There are two restaurants at Coworth Park, one proudly touting a Michelin star and a more casual eatery called The Barn. Sadly, the award-winning menu of the former will have to wait (another casualty of the dreaded C-word) but thankfully the alfresco setting of The Barn more than made up for it. Away from the main house is a collection of elegantly converted stables and barns (including the cottage where Harry and Wills got themselves togged up before the short trip to Windsor for a little-known wedding) and the restaurant sits neatly tucked in the middle. This clever bit of design makes you feel like you have left the hotel grounds and stumbled on a quaint countryside village.

I gorged on a delicious burger and my wife had some perfectly cooked fish, whilst both of us finished off the champagne we started in our room (BYOB has never been so glamourous.) Feeling like the proverbial fatted calf, I suggested an stroll back to the hotel was in order – it was a particularly peaceful and romantic evening. 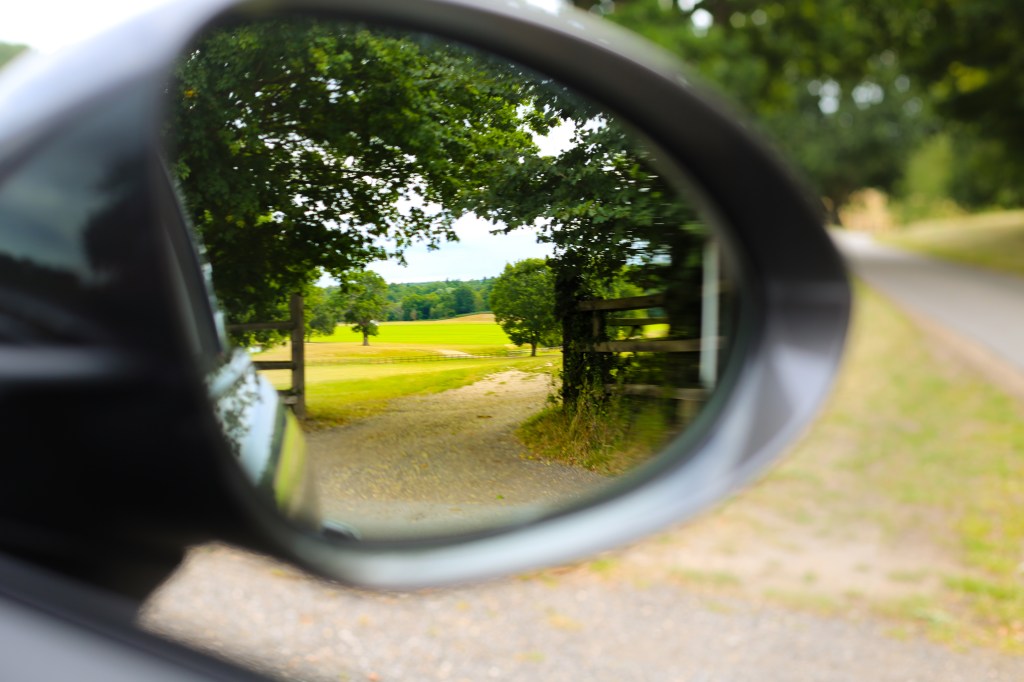 A special night away in a beautiful hotel is nothing without a good breakfast and Coworth Park didn’t disappoint. Having seemingly ordered everything on the menu we sat down at the diligently laid table in our room and took in our surroundings. Over a delightful flat white and eggs benedict (with a side of bacon – always a side of bacon) we looked out at the bucolic setting and onwards to two polo players seemingly warming up for a day’s training. It really was the haven we were seeking, and we were keen to voice how lucky we were to have this respite.

Knowing that we’d soon be back in the big smoke, we stretched checkout as late as humanly possible and slowly made our way through the 27 different breakfast options we’d ordered. I have a feeling I made this order after my second post-dinner Negroni. Or maybe after the glass of Port I ordered under the pretext of it being a digestive? Either way I’m glad my boozy mind thought that ‘a grotesque amount of bacon’ was a reasonable request. 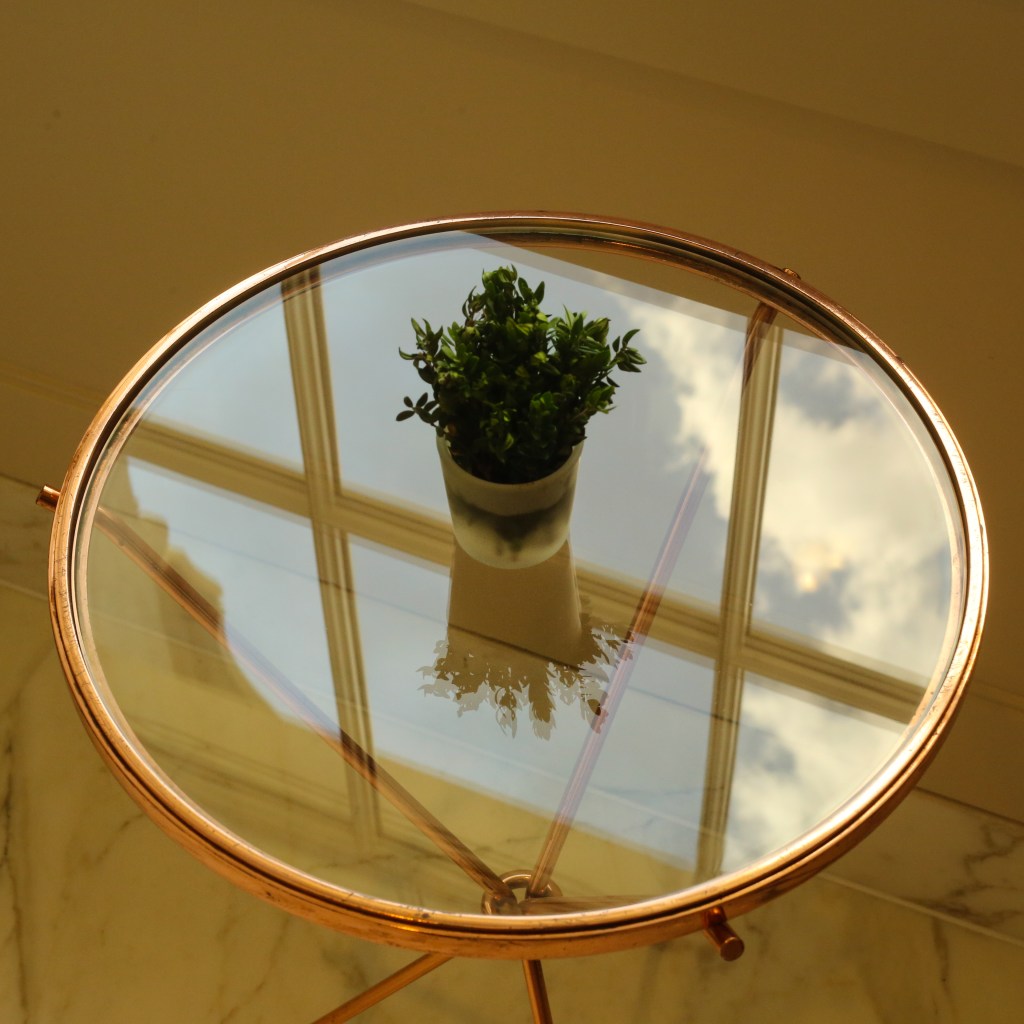 Full of the joys of life and certainly more than our five-a-day it was time to check out: although not before my wife made enquiries about where to buy the pillows they place in the rooms (they were special, I have to say). We said our goodbyes and stepped from one luxury setting into another: like a devoted guardian the Cayenne sat ready and willing to whisk us home.

Although sad to leave, the peaceful glide of this German SUV was a suitable segue between minibreak destination and home. I’m sure (very sure) there was a time when a British aristocrat and a German engineer wouldn’t have been a happy pairing, but today these two are welcome bedfellows. Coworth Park and the Cayenne Coupé partnered effortlessly to give me and my (now extremely relaxed) wife the perfect anniversary break – something in no way a given in these strange and uncertain times.

With special thanks to Porsche GB and The Coworth Park Hotel