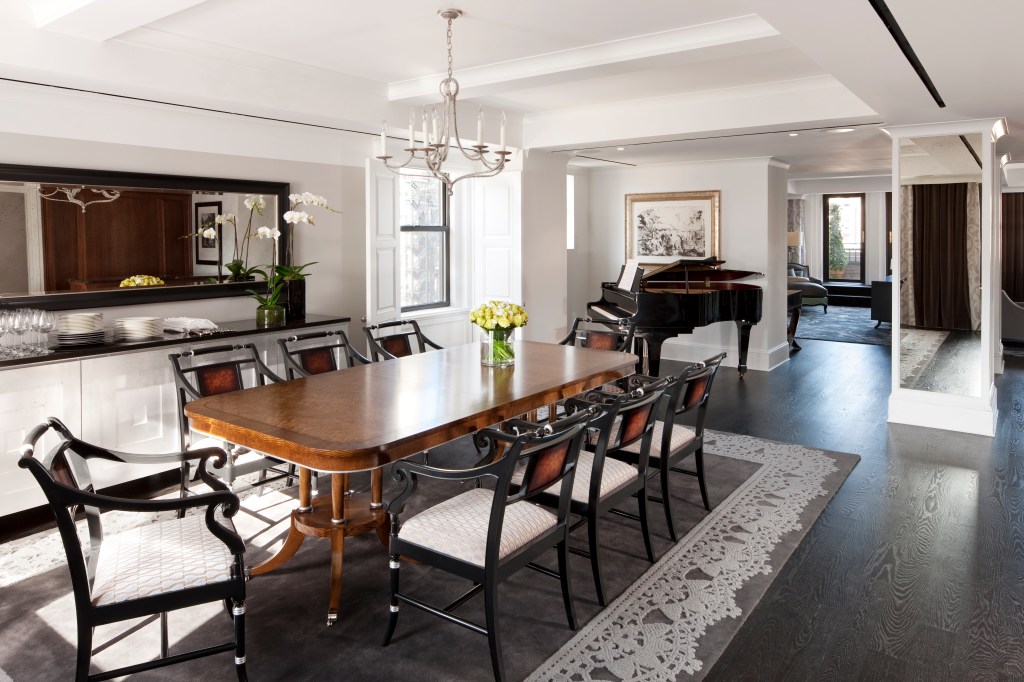 With Frieze New York (7 May- 10 May) looming, it’s tricky to think of a more apposite space in which to hold a hyper-trendy art soiree – think Warhol’s shindigs at The Factory, with the same weapons-grade glam-factor but with only world-beating champagnes providing the highs –  than the Presidential suite at The Surrey.

Visitors, having been given an amuse bouche of the rich artistic fare to come in reception – the tapestry of Kate Moss by local photorealist titan Chuck Close – will, entering the suite, find their eyes hiked straight towards the focal point of a seating area overlooking Central Park: an antique chaise lounge with a recipe for ‘The Perfect Manhattan’ cocktail painted onto it by couture furniture craftsman Jimmie Martin.

It will then take savvy art buffs a good hour to explore the 2,127-square-foot space – which has 10-foot ceilings and includes a private terrace, baby grand piano, dining room, bar, fireplace, retractable projection screen, sauna and direct access to the hotel’s English-style Roof Garden – thanks to covetable pieces on display by Donal Sultan, Richard Serra, Ann Hamilton, Jonathan Borofsky, Nathalia Edenmont, Mel Bochner, Donald Baechler and Cecily Brown. Even the two-person claw bath in the en suite could, placed in the right environment, have art-lovers halting in their tracks and rubbing their chins thoughtfully…

New York’s only Relais & Chateaux hotel is an Upper East Side gem: an erstwhile home to the likes of Bette Davis and JFK, as well as Padma Lakshmi (as noted in her 2016 memoir, Love, Loss and What We Ate). It’s also a bastion of pre-war Beaux- Arts splendour and charm, especially since a $60 million-plus transformation in 2009 which saw renovation and preservation delivered in exquisite harmony.

Elsewhere, the world-class art collection makes every space in the hotel impossible not to linger in. Peruse the lobby and, as well as that Kate Moss tapestry considered the collection’s lynchpin, you’ll find two works – You Are My Own and But The Myth of Love – by Jenny Holzer, chosen for the stunning juxtaposition their bold, crisp text makes with the trimmings and fittings of an old, ornate building. There’s also an installation by William Kentridge which transforms an abstract illustration from an antique book into a truly arresting modern video piece, and a wool felt work by Helen Amy Murray, the finer nuances of which reveal themselves tantalisingly with each step you take towards it.

The mind which assembled this remarkable portfolio is that of Lauren Rottet, a renowned architectural and interior designer whose equally eclectic décor choices – from the black-and-white lacquered wall effect in the bar to the hand-tooled leather which clads the front desk, via an intricate mosaic tile pattern which echoes the antique Oriental carpet in the grand entry – give off the impression of having been curated over decades spent traversing the globe. Rottet went about her task by picturing the hotel through the eyes of another illustrious former resident, Coco Chanel, hence the monochrome effect throughout which somehow manages to be warm and welcoming despite the chromatic economy.

A prevailing sense that you’re hanging out somewhere that’s quintessentially edifying – a kind of cultural ambience which is absorbed almost osmotically – is not all that The Surrey offers in spades. Foodies are (literally) well catered for too: it was here that Daniel Boulud opened his first New York City restaurant, Daniel, and in 1998, the space was relaunched as Café Boulud. It’s an eatery in which a contemporary spin on classic French cuisine with seasonal delicacies and worldly flavours aplenty sees dishes such as duck confit with green lentils, caramelised pear, balsamic braised treviso and mustard jus (as beautifully nuanced across the palette as any fare we can recall tasting) served in pleasantly bustling, congenial surrounds which further reinforce the notion that you’ve opted for thinking person’s New York hospitality.

From aesthetic splendour to delectable cuisine to sensory touches, the Cornelia Spa at on the 2nd floor of The Surrey offers bespoke experiences from a carefully curated treatment menu as well as all-natural botanical tastings, and amuse-bouche tastings in a blissfully hushed environment (the fact that you’re roughly five seconds’ walk from Madison Avenue becomes pretty surreal in the Cornelia) that even includes a cosy library packed with luxury titles.

All in all this is the artful New York visitor’s choice, in more ways than one: and if you can secure that Presidential Suite, and wish to celebrate the end of global lockdown with a gathering of the city’s art-loving intelligentsia, all the better.