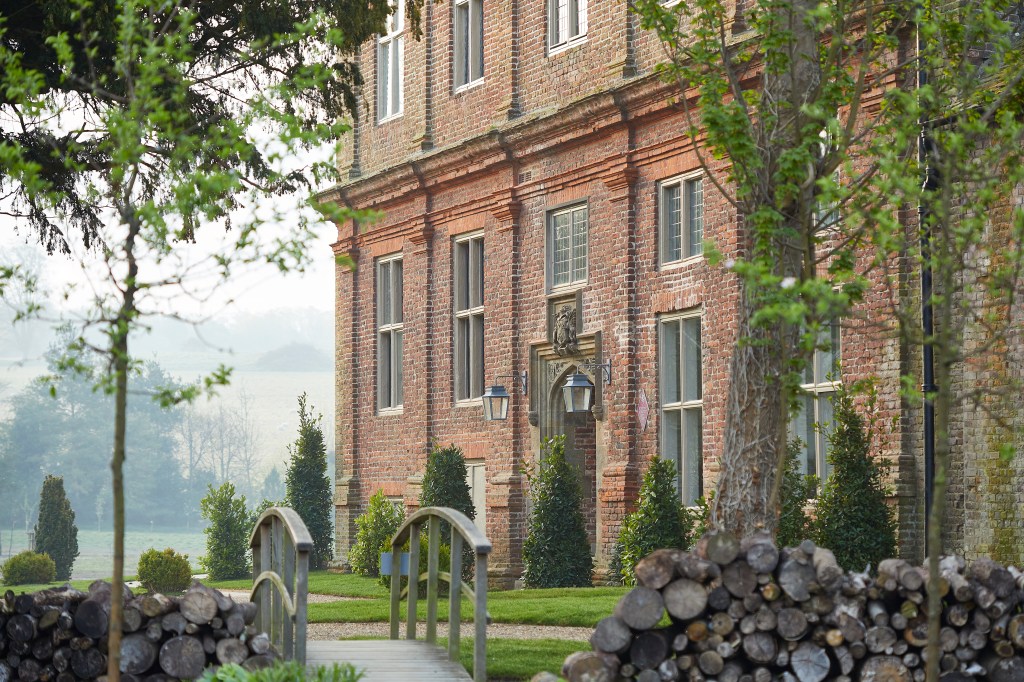 Just outside the village of Bridge, three miles south of Canterbury and a mere 56 minutes by train from central London, lies a beautiful 16th century manor house, with a wealth of history embedded in its red brick walls. Now a darkly seductive country hotel, it’s a 28-room marvel the owners call “an intriguing old building with a real rock and roll feel”, owing to the many gigs and lavish parties that were once thrown here.

A treasure trove of lovingly restored period features dazzle the senses: secret stairways, large fireplaces and any number of lots of nooks and crannies are set amid its twisty-turny Jacobean interiors. Beyond the main building, a Coach House offers more bedrooms along with seven super cute ‘hop pickers’ huts’, complete with huge beds, roll top baths, terraces and fire pits. And then there’s those magical gardens, with a river running through them.

Previously the Bridge Place Country Club, The Pig at Bridge Place, Canterbury is the newest hotel from legendary husband-and-wife hoteliers Robin and Judy Hutson. Robin, founder and chief executive of UK hotel business Home Grown Hotels, and formerly co-founder of Hotel du Vin the chair of the Soho House group, has been called “Britain’s Most Influential Hotelier” – if your UK hotel has a power shower or fresh milk in the fridge or a kitchen garden, he’s probably the man who originally set that in motion, and with Judy, he has revamped the UK hotel experience.

For the past eight years, he and Judy have run the six-strong collection of country retreats known as The Pig, in locations across the south of England, providing luxury in the most modern way – less bling here, more nurture there. The Pig is all about local produce, relaxed interiors and kicking back – or “luxury for the soul” as one impressed critic said recently. Judy is the creative director and design genius responsible for the look and feel of these iconic hotels, and employs an easy, relaxed style – “nothing challenging or over precious” as she told Country & Town House. “I use an eclectic mix of old and new to give the impression that the interiors have evolved over a number of years.”

Her approach to design is lovely: “I start by creating a character in my head who could have lived there. For example, Great Aunt Mabel lived at The Pig at Combe, Devon. She was faded gentry, had dogs and wore tweed skirts and a baggy home-knitted cardigan. Great Aunt Dorothy, at The Pig on the Beach [in Dorset] was an eccentric artist who wore a smock and painted on the lawn overlooking the sea. Once I have a character, I forage for fabrics before taking my final selection to the site and trying them at the windows.”

And the person she had in mind when she designed the Pig at Bridge Place? Well, that would be a certain Marianne Faithfull. Bridge Place, you see, has a real rock and roll heritage – this was the place to gig in the 60s and 70s, where bands such as Led Zeppelin, the Kinks, the Moody Blues, Manfred Mann, The Yardbirds and others came to play. And there’s a decidedly hedonistic, Stevie Nicks /Marc Bolan vibe to this one (“somewhere between The Eagles’ Hotel California and the Rocky Horror Picture Show”, say the owners), with its flowing scarves, velvet jackets, jewel glassware and deep coloured furnishings.

This place was once a great society attraction: the first manager Sir Arnold Braems was name-checked by Samuel Pepys four times in his diary, and next to Chilham Castle, Bridge Place was considered the greatest house in East Kent. Today, meanwhile, all The Pig’s signature touches are present and correct: including the amazing attention to detail – particularly the love and care where the food is concerned. The Pig has “an obsessive commitment to home grown and produce” they say, and a mouth-watering menu includes the likes of Slow Braised Organic Lamb Neck, Spring Pea Risotto or Broad Bean Leaves and Moroccan Mint Oil (‘Mostly picked this morning’) as well as Fillet of Folkestone Market Hake. What cannot be grown in their Kitchen Garden is sourced from local suppliers within a 25-mile radius, such as The Wonky Parsnip and the brewers of Shepherd Neame: yes, this being Kent, the ‘WineGarden of England’, with over 50 vineyards in the county, that means award-winning wines as well as excellent beers.

All in all, it’s bucolic bliss.

Nightly rates for The Barn – a vast, rustic upstairs-downstairs suite – start at £455 on weekends (thepighotel.com/at-bridge-place)