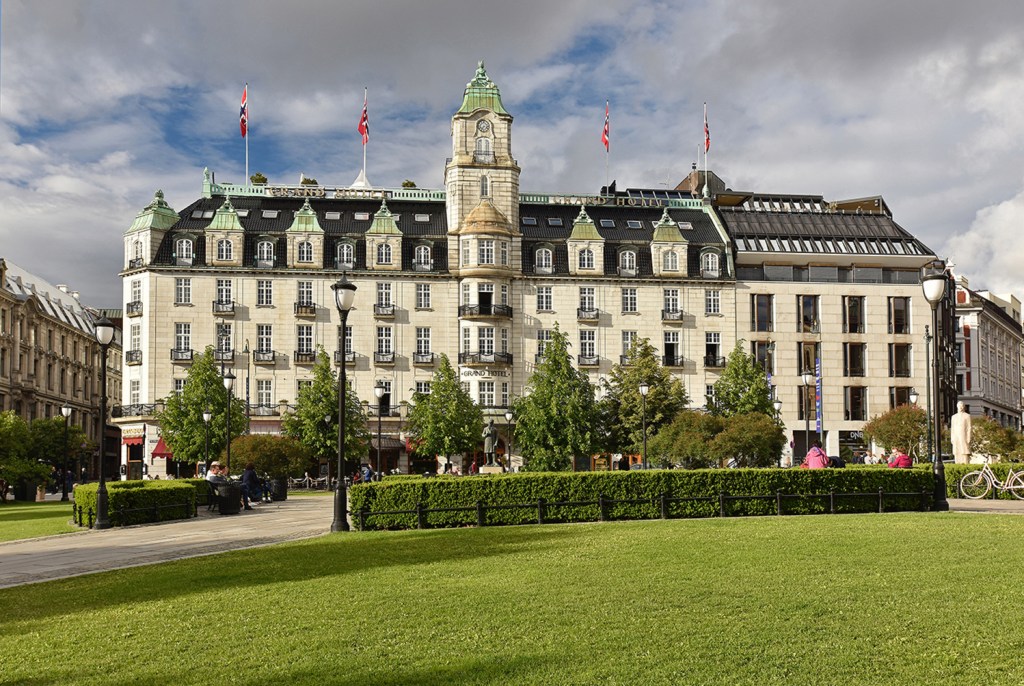 Over the past few years, there has been a marked rise in all things Scandi. ‘Hygge’, the Danish word for cosiness and comfort, went more than a few rounds. ‘Lagom’, the Swedish word for just enough, focussed on living more mindfully and sustainably. And ‘umage’, the new kid on the block, concerns itself with making moreeffort in your day to day life. So, with the latter in mind, I thought it was high time I made more effort with my weekend travel breaks and went to visit Oslo, Norway’s lively capital.

With a population of just 600,000, Oslo is a buzzing hubbub of old-world tradition, modernity and culture. The old-world tradition is best found downtown and is exemplified in no small way by my accommodation for the weekend, Grand Hotel Oslo by Scandic. Deemed by many as Norway’s premier 5-star hotel, the Grand Hotel first opened its doors in 1874 and has become a staple amongst the rich, famous and prestigious ever since. With 284 rooms, 54 suites, a rooftop bar, the Artesia spa and the acclaimed Palmen restaurant, it has played host the Nobel Peace Prize winners, and lies just minutes from the Royal Palace along Karl Johan’s Gate.

The building, which was built in a classical style using white granite, is centrally located, near some of Oslo’s most modern and enticing offerings. On the Bjørvika peninsular, just 15 minutes from The Grand, lies the highly commended and striking Oslo Opera house, a monolithic modernist concrete and glass structure that seemingly rises out of the harbour. This is well worth a visit, whether for opera or not. So too is the Astrup Fearnley Museum of Modern Art in Aker Brygge, also 15 minutes from The Grand. Another geometrically modernist structure, it houses a moving assortment of unmissable modern art, including some of Damien Hirst’s seminal works, particularly his famed Mother and Child (Divided).

Yet Oslo also proffers a rich history, namely its immense Viking and medieval Scandinavian narrative, which juxtaposes seamlessly with its stark modernist influences. Near Aker Brygge, on the peninsula of Bygdøy and amid embassies and the homes of Oslo’s elite, you’ll find museums that display Norway’s vibrant maritime history. The Oseberg Ship, built in AD 820, is just one of the restored vessels on display at the Viking Ship Museum. And Norway’s more recent maritime exploits through both Fram, the ship used by explorers Nansen and Amundsen, alongside Thor Heirdal’s infamous Kon Tiki, are found nearby too.

If visiting during the summer months, you’ll want to take a short boat ride for lunch at Lille Herbern on a miniscule island nearby. It has been proffering exquisite fresh seafood (summer months only) since 1929 and is well worth the effort to find. If, however, you’re in Oslo’s centre itself, then Nedre Foss Gård in the city’s trendy Grünerløkka district should certainly be considered. A former mill that can be traced back to 1220, it now serves Oslo’s gastronomic-minded locals with a contemporary take on traditional cuisine. I opted for its set brunch menu, which comes highly recommended.

So too does Palmen Restaurant, The Grand Hotel’s fine dining restaurant, situated in the building’s former stables. Again, Nordic cuisine takes a contemporary twist here, and its selections of wines is staggering. Later, you can and should while the night away at the Othilia bar in the hotel’s lobby.

But there’s ample opportunity for rest and recovery after long days spent exploring too. At Artesia Spa, situated on the rooftop and free to use for hotel guests, you’ll find a pool and three saunas in which to relax. And the rooms and suites themselves, which also merge Oslo’s history with its modernity, are a worthy space in which to recline, some with truly spectacular views over Studenterlunden park and the National Theatre.

So, after just two days in Norway’s capital, it’s become apparent that there’s plenty on offer for the modern, adventurous traveller. And with The Grand Hotel Oslo by Scandic as your base, you can’t go far wrong.

Prices at The Grand Hotel Oslo by Scandic start from 2105 NOK (around £170) per night. For more information visit grand.no or email booking@grand.no

All photographs by Kyle Meyr