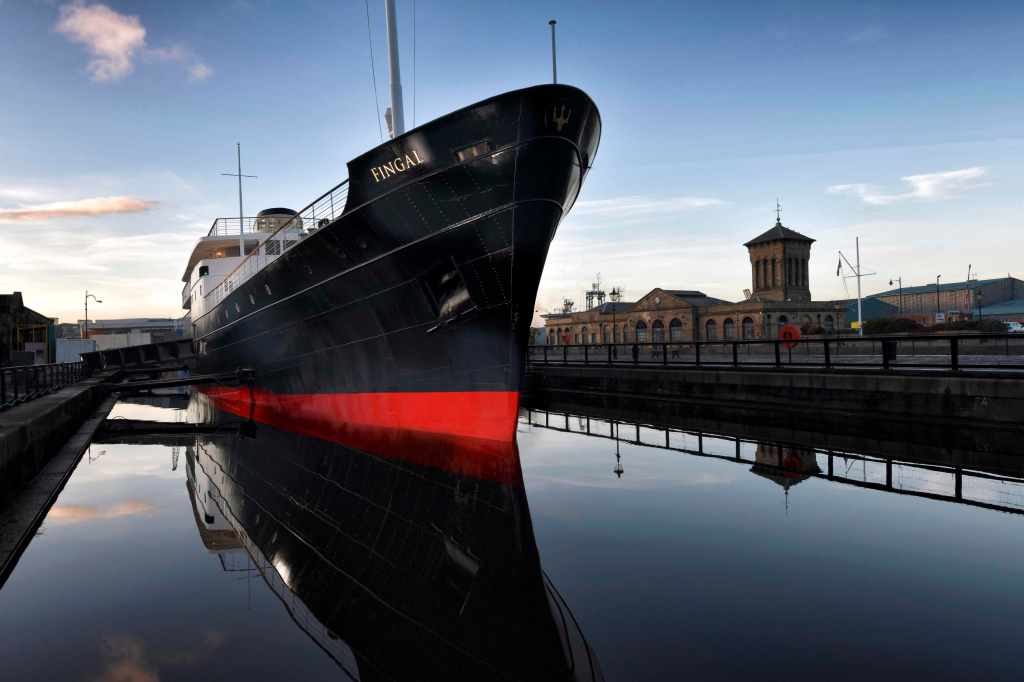 Firstly, a word of caution for those heading up to Fingal’s Lighthouse Bar for breakfast, still a little bleary and in need of caffeine. One gaze upwards at the bar’s ceiling may disconcert you – made from undulating copper, it looks exactly like a horizontal cascade of rippling tidewater. This beautiful and clever design detail is just one of the many stylish and spot-on features about this floating boutique hotel – a former Northern Lighthouse Board ship, and younger sister to the nearby Royal Yacht Britannia, now permanently moored in the historic port of Leith in Edinburgh.

The final vessel to be built (for £448,000) by Glasgow’s famous Blythswood Ship Building Company, but originally registered in Leith, Fingal – named after an ancient Caledonian king and a hero in a cycle of epic poems by Scottish poet James MacPherson – made her maiden voyage on 13 January 1963, from Greenock to Oban. And for the next 30 years, she navigated rocky inlets and stormy seas from the Isle of Man to Oban and Skye, in the days before the Northern Lighthouse Board had helicopters, ferrying lighthouse keepers, equipment and supplies to perilous and stormy Scottish locations.

The Lighthouse Bar with its undulating copper ceiling

She certainly made an impression on her future owner, Royal Yacht Britannia Trust CEO Bob Downie, who was born in Oban and had grown up watching her travelling back and forth as she worked. And there’s many an Edinburgh local with family ties to Fingal, and the lighthouses she serviced. In her final six years, she serviced Orkney and Shetland, was retired in 2000, then ended up in the hands of a private owner, who carefully maintained her for the next 14 years, before Britannia purchased her in 2014.

Now back in Leith, she has been transformed into an exquisitely crafted floating hotel by Edinburgh’s Royal Yacht Enterprises, who has invested £5 million to preserve her rich history and “transform the Scottish hotel scene”. After being developed by the Pedley Group (who’ve installed some 180,000 hotel rooms in 61 countries for leading hotel groups including IHG, Hyatt, Hilton and Marriott), the boutique attraction was launched in January 2019. And what a beauty she is.

Luxury here comes in the incredible attention to detail: everything has been considered, from the stunning whole calf skin wardrobe and the Ttident logo on the handles to the Noble Isle toiletries in the shower and the nautical taps and hooks.

All 23 rooms, including classic and luxury cabins, the duplexes and a ‘penthouse’ suite with private deck, are named after lighthouses. I stayed in Bell Rock, which stands off the coast of Angus and is the world’s oldest surviving sea-washed lighthouse, built between 1807 and 1810 by Robert Stevenson. Its portrait has been stitched above the huge bed. And upon those beds lie exquisite woven bedspreads, created by Scottish textile designer Araminta Campbell, complete with patterns representing a lighthouse, its beam and the surrounding sea and richly coloured land.

Each room contains a replica of Fingal’s original Radio Controller’s chair (Princess Anne has the original) and the suite hosts the original log books from Fingal’s service days. Every one of those rooms is a different shape too, the cabins following the lines of the ship – while not a single piece of on-board joinery is the same.

Down a sweeping staircase, in the ship’s former hold in its bow, you’ll find a spectacular ballroom, stage included. There’s even a retractable roof (cars can be lowered into the room!) while the aforementioned Lighthouse Bar has full-length windows, that fabulous ceiling and sumptuous leather chairs. Non-residents can come and just have a drink, but need to book in advance.

You can also plan events with sister ship The Royal Yacht Britannia, just 10 minutes away. It’s a terrific tourist destination – whether or not you’re a royalist – by day, while at night the Queen’s dining room can be hired for private dining before a waterside stroll back to your cosy cabin on Fingal. The latter’s menu is worth staying in for, too, serving delicious local, seasonal fare, and don’t miss the afternoon tea where you can feast on the likes of truffled potato and parmesan tart or smoked salmon with tarragon mustard. Just don’t get so comfortable that you miss stepping out on deck to watch the sun go down over the Port of Leith.