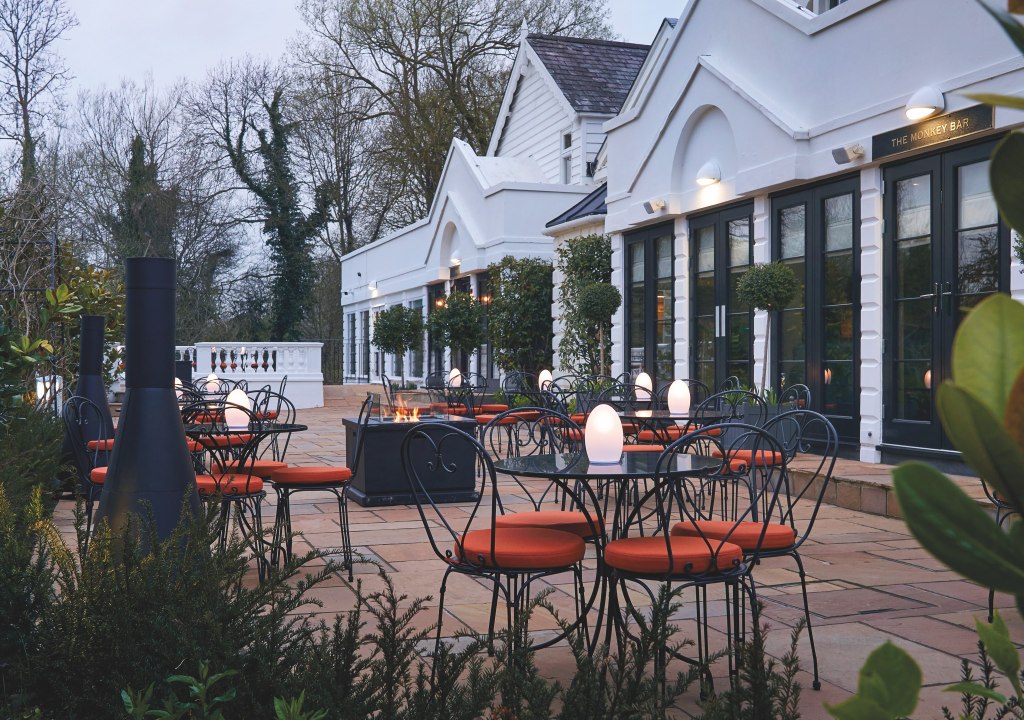 The Eighties had the Groucho Club. The Nineties had Soho House. But back in the Sixties, Monkey Island was the place to be. No mud-encrusted hippies here: this historic estate in Bray-on-Thames, Berkshire, was next to Bray Film Studios and became the ultra-fashionable haunt of that other Swinging tribe – the Bond-esque beautiful people, who purred up from London in their E-Types looking impossibly sleek and elegant.

“Monkey Island was the place to go – it was pure showbiz,” one former regular recalls. “The Island was unique – you parked in a field and then either walked over the wobbly footbridge or were rowed across if there was a storm. But once on the island the atmosphere was fantastic – there was dancing to a live band five nights a week and little attention paid to licensing hours as the owner regarded it as an offshore territory! He even had his own river cruiser for summer evenings.”

Memories were made here; stories morphed into secrets in the island’s heyday. And, finally, in May, following a difficult 20 years, this iconic hotel has shaken off the dust sheets and, thanks to a passionate new owner, thrown open its doors once more. Sprawled over seven acres, this magical oasis is a breathtakingly beauteous idyll, with its white-brick Pavilion and Temple building set amid dazzling landscaped gardens with picturesque views of the Thames. It may be just 40 minutes from London (just past Windsor) but it feels like another world away, far removed from the hubbub of city living. It really is the perfect private countryside retreat, particularly for gastronomes – Bray, after all, is the only village on the planet housing a grand total of three Michelin-starred restaurants, including Heston Blumenthal’s world-famous Fat Duck.

The origin of the island’s exotic moniker is a source of some debate. Rumours, completely unsubstantiated, claim an insane George III was banished here with a pet monkey. Alternatively, it might be because the 3rd Duke of Marlborough, who bought the land in 1723 as a fishing retreat, commissioned an octagonal Fishing Pavilion whose ceiling was slathered in elaborate depictions of monkeys punting, fishing and hunting. But it’s likelier due to the Church’s early ownership: in 1197 monks attached to Merton Priory settled nearby, building fishponds close to the island which was christened Monks Eyot (meaning ‘island’).

It took 300 years for the clergy to finally release its ageing grip, selling it onto the Englefield family. Change was in the air, hastened by the 1666 Great Fire of London when barges dumped rubble from the capital’s reconstruction onto the island, raising it above flood level and creating a suitable site for building. Under the Duke of Marlborough’s ownership it would become a luxury angling site like no other. And by 1840 the Pavilion had become a riverside inn, where, 30 years later, Mrs Plummer the landlady served drinks through the bar window next to “The ‘Monkey Room”.

It was the start of a golden era. Visitors included monarchs – a 1905 photo shows Edward VII taking tea under the walnut trees – and showbiz royalty, such as Dame Nellie Melba. Sir Edward Elgar worked on his First Symphony Violin Concerto in The Hut, a house on the adjacent bank. Literary types included Siegfried Sassoon and H.G Wells and lover Rebecca West, whose 1918 novel The Return of the Soldier centred on a past affair on Monkey Island. In 1956 a footbridge was erected, a banqueting room cantilevered over the river, and live music and parties attracted a cosmopolitan crowd.

Its social peak was the 1964 Oxfam Ball, reported on in Tatler, at which 1,400 guests descended for dancing, fundraising and cabaret. These were the heady days when the Island’s in-house band took music recorded there to Denmark Street to be pressed in vinyl and ferried back again to sell. By the 1980s, after earning multiple dining awards, the island was sold, and the Grade 1 listed properties spiralled into decline – until it was finally bought and renovated by Malaysian hotel-owning firm YTL.

The island’s new boutique hotel offers 38 bedrooms and three deluxe suites conceived by award-winning New Yorkers, Champalimaud Design. Visitors are greeted by charming staff, who lead you and your luggage over the (new, not wobbly) bridge and onto the island, where geese and ducks mingle happily on the lawns in front of the beautiful white buildings, with their stunning terrace views over the Thames. It’s glamorous but as relaxed as you want to be: potter around barefoot on your own terrace sipping the house gin and lavender cocktail, take a pre-dinner champagne boat ride around the island or work up an appetite with a tow path stroll. The restaurant offers delicious local, seasonal fare and, for an after-dinner treat, wander across to the Shepherds Huts, wrap up in a blanket and sip on ‘Boozy Hot Chocolate’  as you melt your Smores in the firepit under a starlit sky.

Guests should also check out the wonderful Floating Spa  – a world first. Accessed via a path through the gardens, this beautiful bespoke barge has three serene rooms and bespoke treatments based on the wisdom of the apothecaries who used to impart their science on a boat. Treatments are dreamy –  the Floating Massage mirrors the hypnotic effect of rocking on water –  and skilled therapists use house-cured herbal oils to magic away tension and knots. Every treatment begins with an  ‘Elixir Tasting’ of one of the monk-brewed ancient herbal tonics: Chartreuse, D.O.M Benedictine or Frangelico – just another divine detail in this rightly revered Thames gem. You can bet those 12th century monks would approve.