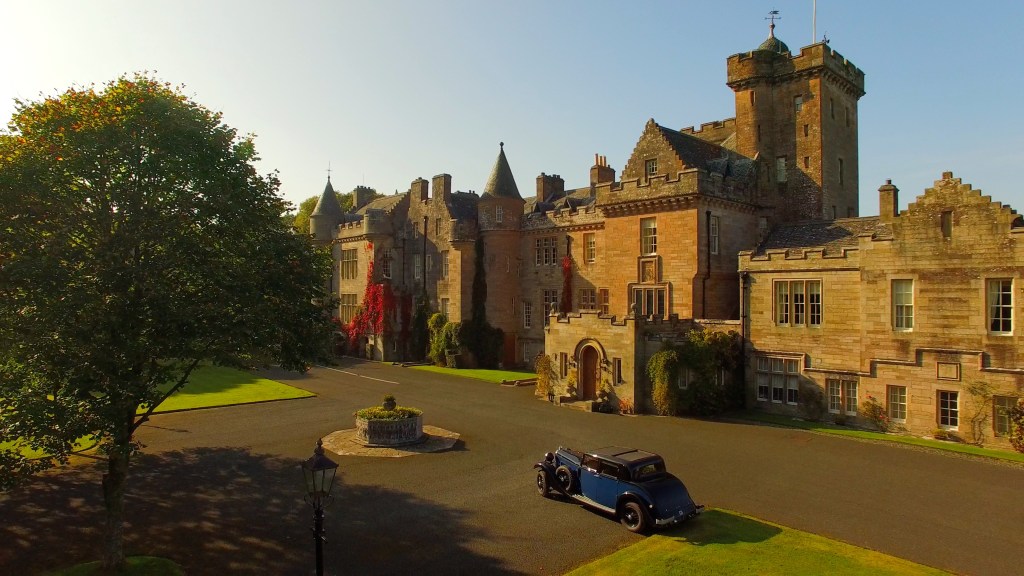 Only 24 hours before the day in May when the first guests were due to arrive at Glenapp Castle’s gilded new £2 million penthouse, the independent Scottish hotel still didn’t have sign-off from the local authorities to open it.

“It was warp factor 10 stress levels if you let it affect you,” says Glenapp’s amiable and, judging by his current demeanour, apparently now not terribly stressed owner Paul Szkiler. “At one point, we were looking at £35,000 in lost earnings every week. And then we blew the penthouse budget by more than half a million.”

The Endeavour, as Glenapp’s stunning 4,500-square-foot, H&H Interiors designed penthouse is called, had been in financier Szkiler’s head since he bought the Relais & Châteaux hotel in 2015 (“It was a lifestyle business when we took it over, running at around 30 per cent capacity – now it’s over 90,” he says). Four years ago, the project to transform the dusty loft space that meandered around the baronial Victorian castle’s turrets and crenellations into a five-star penthouse began.

The first two years were taken up by figuring out how to make it fire safe. Eventually, half the total spend would be taken up installing fire retardant materials and devices such as a huge stair pressurisation system that can suck or blow air through the apartment with near-hurricane force, a gadget that accounted for more than its fair share of that budget-busting half million. Quite what happens to you if you’re in its path when it’s activated must depend on your stature, one suspects.

Then came the pandemic, kiboshing schedules, stoppering revenue streams and raising the stress levels further still. But, just in time, permissions were granted, The Endeavour opened and the guests came.

Over a drink in the dappled courtyard beyond the site’s Azalea Restaurant, a 150-foot long glasshouse surrounded by a vast walled kitchen garden, Szkiler insists it was all worth it. “It was like in that film, Field of Dreams,” says the Yorkshireman. “If you build it, they will come…”

And they’re starting to. Up to now, guests have been mostly from the UK. When this is all over, Szkiler expects a 50/50 split between UK-based and international guests, but at present he says the 17-bedroom hotel, now with the addition of the four-bedroom penthouse, is entertaining mostly domestic visitors, or well-heeled staycationers, as the vernacular has it. News that the UK Government is opening the borders to fully vaccinated travellers from the US and the EU will be music to the Glenapp owner’s ears.

If that’s the basic plot, the third act is a memorable one. If and when you can get there – and let’s get this out of the way now – Glenapp is entirely worthy of the journey. Not that it’s easy to get to. For want of a helicopter, we ran the gauntlet of British roads in high-summer, driving the length of England before trekking the 100-plus miles along mostly single carriageways that take you west from Gretna Green on the Scottish border through Dumfries and Galloway to the Ayrshire coastline.

But what a drive it is. We speared off the main road and into Galloway Forest Park, past Murray’s (lonely, weirdly monolithic) Monument and the marvellously named Clatteringshaws Loch with its 1930s dam, where rolling hills glazed in spruce and heather drop down to the water. But if navigating windy roads and the looming threat of tractors aren’t your thing, Glenapp’s genial staff will pick you up from any UK airport or train station (Prestwick is one hour north, Glasgow a further 45 minutes beyond).

Some two hours and more beyond Gretna the coastline emerges, but without sat-nav, Glenapp would take some finding. There are no signposts to it, and it’s all but invisible to the world outside, screened by woodland so that you’d almost have to be in the middle of the Firth of Clyde to see it. No doubt, its remoteness is part of its allure.

As indeed is The Endeavour itself. On arrival, with the castle’s stony, imposing silhouette disguised by cloudless skies and blistering sunshine, we’re introduced to Will, a charming, sandy-haired young man in what looks a uniform blue woollen suit clearly intended for the 364 days of the year when it isn’t so blazingly hot. Will will be our personal butler for the duration of our stay, available to us – quite literally – at the push of a button.

It’s Will’s first duty to show us round the penthouse, which, given the absence of an Ordnance Survey map, is a vital one. Through the low-ceilinged library and on into the media room with its giant TV disguised as a gilt-edged mirror we go, then on from these cosy anterooms to the huge, airy dining room-cum-sitting room with its bespoke sofas, grand mahogany sideboard and views out over the sea to the island of Ailsa Craig and the Isle of Arran beyond, up the spiral staircase and into the master suite, up another staircase to the roof, down again past another bedroom to the family kitchen, and then back past whence we came to a sauna, a private treatment room and two more bedrooms. Along the way, there are four whopping marble-drenched bathrooms with brass-tapped, roll-top baths and occasional chairs, and a further WC.

It takes a bewildering 20 minutes just to view the place. The next morning, I’ll time my walk from the master at one end of the apartment to the furthest bedroom where my son has chosen to take up residence, and it will take me one minute and six seconds. The Endeavour is enormous.

And for 48 hours, it’s all ours. A haven from the world whose scale and grandeur conveys a disarming sense of nobility on its inhabitants. All our meals are brought up to us, served by Will and his team, always with care but never with fuss. “I thought the butler would be a stuffy old man,” says my daughter, elucidating a thought we’d all had.

Goodness only knows the days dear Will must have worked keeping us fed, watered and entertained. Breakfast in the modern farmhouse kitchen with its off-white units and trendy white-washed wooden furniture is ready for us when we wake, presented by a smiling Will, and it’s Will still clearing up after us at gone 10.30pm once we’ve polished off a magnificent six-course signature dinner prepared by Glenapp’s executive chef Joe Gould. After we’ve devoured his delicious leek, cheddar and saffron raviolo and melt-in-the-mouth Scotch fillet of beef (farmed 17 miles away, we learn), Gould climbs the three storeys to come and say hello. At The Endeavour, everything comes to you.

Almost everything. The ghostly island of Ailsa Craig, a lump of volcanic granite 10 miles off the coast that provides the world with its curling stones and a nesting ground for umpteen species of bird including puffins and gannets, isn’t for moving, so the hotel has its own boat, a thundering all-weather RIB that can make the crossing from the nearby town of Girvan in around 25 minutes.

Captain Roddy and second-in-command David, a cheery pair of (semi-)retired locals, take us on a personalised tour of the island, which has been uninhabited since the 1970s. David spent his teenage summers here working the granite quarry and talks wistfully of better times as we tour the lighthouse’s abandoned cottages and rusting outbuildings. With clearly mixed emotions, he tells me that the cottages’ current owner, Scottish Indian business tycoon Bobby Sandhu, has plans to turn them into holiday homes, having bought the site for just £85,000 some years ago.

Will, ever faithful, is with us of course, and serves us a couscous and salmon lunch dockside before volunteering to take my sea-sick daughter scavenging on the beach while the rest of us sail around the island to view the nesting birds. As memorable as the towering shards of rock on which thousands upon thousands of birds perch is Will’s pitch-perfect older brother routine.

Back on dry land, we’re offered the chance to trial the latest addition to Glenapp’s extensive activity list, forest bathing. To our surprise, there’s no instruction to don a pair of bathers and meet loch-side for a nipple-shrinking dip – instead, we’re introduced to Chris, a gentle soul with a long, grey beard and an even longer plait running down his back, who leads us on a two-hour walk through the magical 110-acre woodland that surrounds the castle.

Chris, who tells us he was once a traveller but now runs his own local adventure company and brews gin having landed here 30 years ago, invites us to listen to the sounds of nature, feel the energy of the trees and sample his lime blossom tea, which he prepares for us while crouching, elf-like, on a rock in the middle of a stream. It’s a bit weird initially, but walking through the glen and inhaling the sweet summery smells of the forest as the light trickles through the canopy, our city-folk cynicism evaporates to be replaced by a fresh gratitude for the beauty of nature.

And for Glenapp. If it were needed, Chris’s forest school for grown-ups has sealed the deal – Glenapp and the south Ayrshire coast have won us. And, according to Szkiler, it’s only going to get better. He’s set aside further millions to develop other buildings on the estate to add a further 12 rooms, a pool and a wellness centre. Warp factor 10 relaxation levels.

The Endeavour, pictured directly above, is available from £4500 per night high season and £3,250 per night in low season. glenappcastle.com