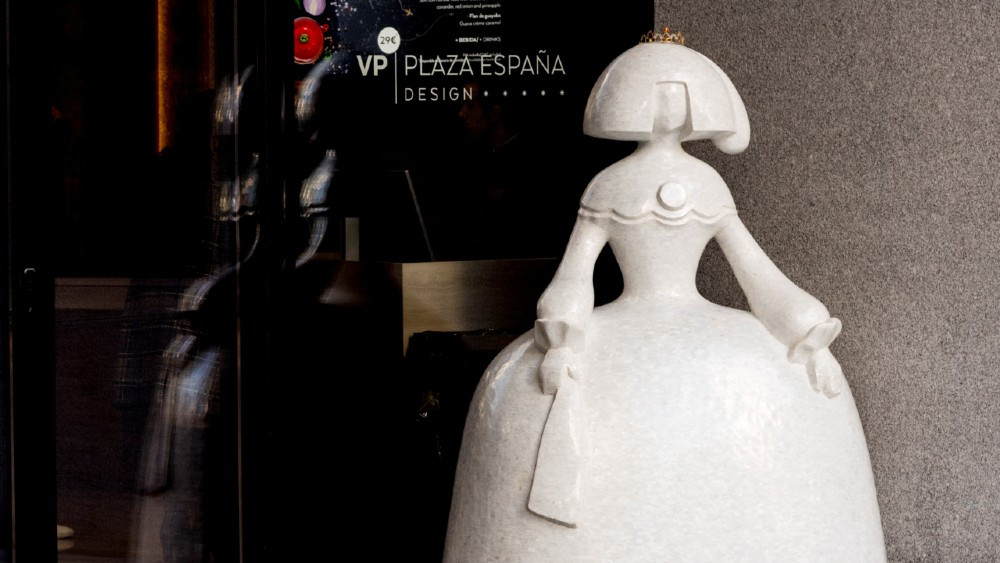 Painted in 1656, Diego Velazquez’ Las Meninas—a portrait of a young princess and her ladies-in-waiting from the Spanish royal court—has become one of Spain’s most famous and debated pieces of art, even earning the description of “one of the most important paintings in art history,” from Sotheby’s.  In 2018, a group of artists led by Antonio Azzato created Meninas Madrid Gallery, a public art project that “freed” the ladies-in-waiting (or “meninas”) from Velazquez’ canvas and placed nearly 80 decorated fiberglass figures of the women in locations all around the city. This week, the project launched for a second edition, with 54 individually created, nearly six-foot tall and five-foot wide sculptures on display from November 7-30. The most valuable piece in the exhibit occupies a front-door place at VP Plaza España Design—an upscale hotel that celebrates Spanish art, design and architecture.

This year’s works have been crafted by artists from all around the world, who drew inspiration from everything from the women and fashions of the original painting to notable Spanish celebrities like Rafael Nadal; one piece—located in the Plaza de Oriente—takes it cues from the TV series, Friends, complete with velvet couch. The most expensive piece, named Menina Lustre de Mar (or Sea Chandelier Lady), was created by Element&Co, a noted interior design firm that has worked on projects for Christian Louboutin, the LVMH group, and St. Regis hotels. The company specialises in the art of applying precious stones and other luxury materials to furnishing and decorative items, creating unique and limited-edition pieces in the process.

In keeping with that expertise, the body of Menina Lustre de Mar—which pays homage to the Royal House of Spain—is entirely covered in over 30 thousand pieces of precision-cut mother of pearl, each applied by hand. This material represents “the nobility, the aristocracy and the bourgeoisie of the time, and also enhances light and shine in an exquisite way, just as Velázquez did in his work,” explain its creators. Further adding to the noble aesthetic is a tiara by gemologist and jewelry designer Lisi Fracchia that is made of 18 carat yellow gold, more that two carats of diamonds, and over 80 carats of sphalerites, a Spanish precious stone—thereby earning the piece it’s high price tag.

The striking lady fits right in with the art-focus of the 214-room VP Plaza España Design, the fifth and flagship property from Madrid-based, family-owned VP Hoteles. While this figure will only stand guard at the Grand Via-adjacent hotel until the end of this month, guests will always find other notable works throughout the public spaces, including pieces by Bilbao native Dario Urzay (whose work has been featured at the Guggenheim Museum Bilbao and the Reina Sofia in Madrid), and buzzed-about Madrid-born photographer Héléne Bergaz. Sculptural designer Pere Gifre, who specializes in water-based works, is the architect of the Atrium, the eight-story-high (and much-Instagrammed) metallic waterfall sculpture that sits at the center of the hotel floors and stretches all the way up to glass-bottomed rooftop pool. Next to the pool is another popular selfie spot, the panoramic 360º Ginkgo Restaurant & Sky Bar, a celebrity favorite where the “art” comes in the form of creative cocktails, nightly live music, and the best sunset views in town. The Meninas Madrid Gallery can be found throughout the city until November 30th, after which most of the meninas will be auctioned off for charity.