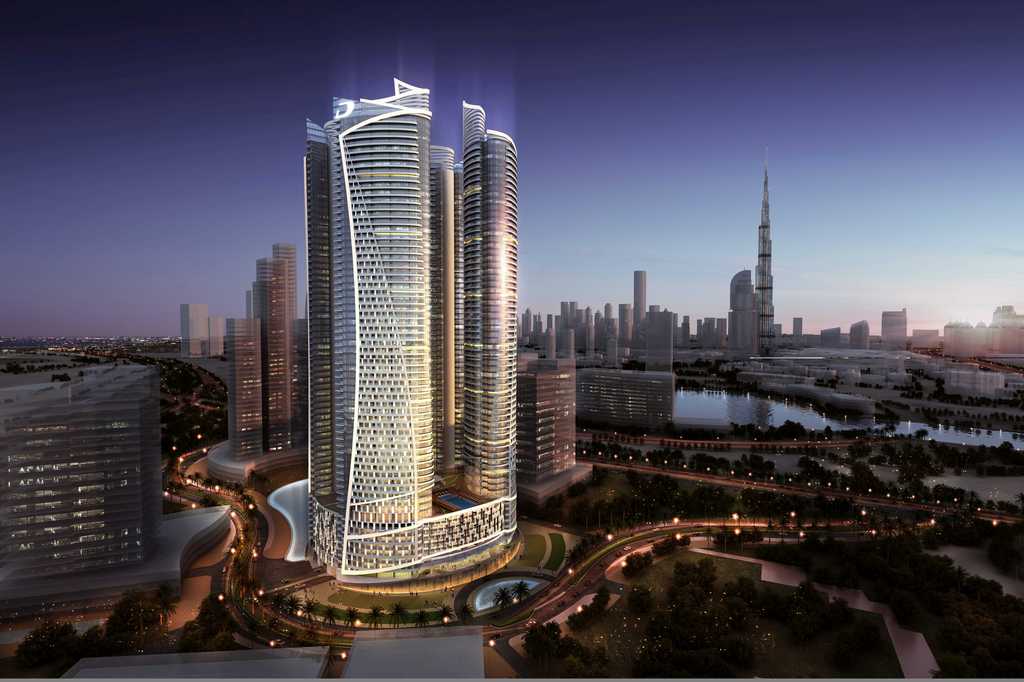 Dubai has never been a place for the understated, and if there’s one thing the United Arab Emirate loves to do, it’s build big, fancy hotels. Because most of the restaurants and nightlife in Dubai is based in or around hotels (for alcohol-licensing reasons, mainly), there’s been little desire to build anything less than five-star properties as the city keeps pushing for the attention of high-spend tourists and tax-free-salary expats. With the Expo2020 happening in the city late next year, there’s now a particular rush to open even more spots that showcase this as the “Las Vegas of the Middle East.” From suites inspired by The Godfather to a hotel nightclub you can drive your supercar into, here are five new and upcoming hotels that showcase Dubai’s penchant for the over-the-top.

Dubai loves its big numbers, and the 800-foot-tall FIVE Jumeriah Village boasts a staggering one: 269 swimming pools, most of which are found on the balconies of the tower’s 247 hotel suites and 254 multi-bedroom apartments, affording guests their own private way to float above the Dubai skyline. For those who want to be a bit more social, there’s also a larger communal pool, plus the global street food-inspired Soul Street restaurant. The hotel also grants access (and a shuttle service) to all the outlets and beach facilities at sister property FIVE Palm Jumeriah. Among the over a dozen drinking and dining options there is The Secret Room, a nightclub that lets VIP guests arrive by driving their flashy cars straight into the middle of the venue via a hidden-away, Batman-style entrance in the underground car park.

Occupying two 60-floor towers connected by a floating Sky Bridge, the Address Sky View Hotel is the latest addition to Dubai’s Downtown, which is home to the Dubai Mall and world’s tallest building, The Bujr Khalifia. Opening in November, the hotel’s most dramatic feature is the 721-foot-high bridge that links the two glass towers: it’s spread across three floors and features a 230-foot-long infinity pool and a branch of celebrated Asian bar Ce La Vi, which also graces the surfboard-shaped rooftop of Singapore’s Marina Bay Sands hotel. With the hotel’s close-up views of the huge annual New Year’s fireworks display off the Burj, this is set to be the most sought-after address for New Year’s Eve—and there’s a 2,475-square-foot Presidential Suite for those who want to take the party private.

Opened this month, the first Paramount Hotel in the region—courtesy of Paramount Pictures—is set in a development comprised of three luxury residential towers and the 69-floor hotel tower, all of which are connected by a multi-level plaza. Naturally, the place aims to make you feel like you’re in the movies—or a film studio—with video walls in the lobby, grand spaces lined with marble steps and gold banisters, movie-inspired entertainment, and a 140-seat Paramount Screening Room. The 92 suites come in five themes: The Godfather, Silver Screen, Carole Lombard, Gatsby and the Producers Suite, the latter with a private screening room and hammam. All suites all have a giant LED TV screen hidden in a big mirror in front of the beds for accessing an interactive entertainment system loaded with the back-catalogue of Paramount Pictures films. There’s also a hidden Prohibition- inspired speakeasy-style bar (requiring a password for entry) that features “interactive” images of actors on the walls, as well as a pool deck, spa, gym, and plenty of retail and F&B options.

The first Andaz hotel in Dubai—slated to open this month—mixes an upscale boutique feel with a design inspired by Emirati culture. From textiles that reflect the geometrical embroidery of traditional hand-woven fabrics and beds framed by a canopy to create an interpretation of a Bedouin tent to an adults-only Cabana pool deck lined with tiles form a modern Arabic mosaic and palm tree-inspired umbrellas by local Emirati artist Khalid Shafar,  the place features plenty of nods to local culture—which is surprisingly rare among the city’s luxury hotel scene. The hotel also serves as an art gallery, with contemporary art pieces showcasing local artists’ works hanging throughout the public space. Spread out along a 984-foot-long private beach on the right trunk of the shoreline, the Andaz occupies two 15-storey towers that give the 217 rooms and suites (as well as 116 serviced residences) floor-to-ceiling views out over Palm Jumeirah.