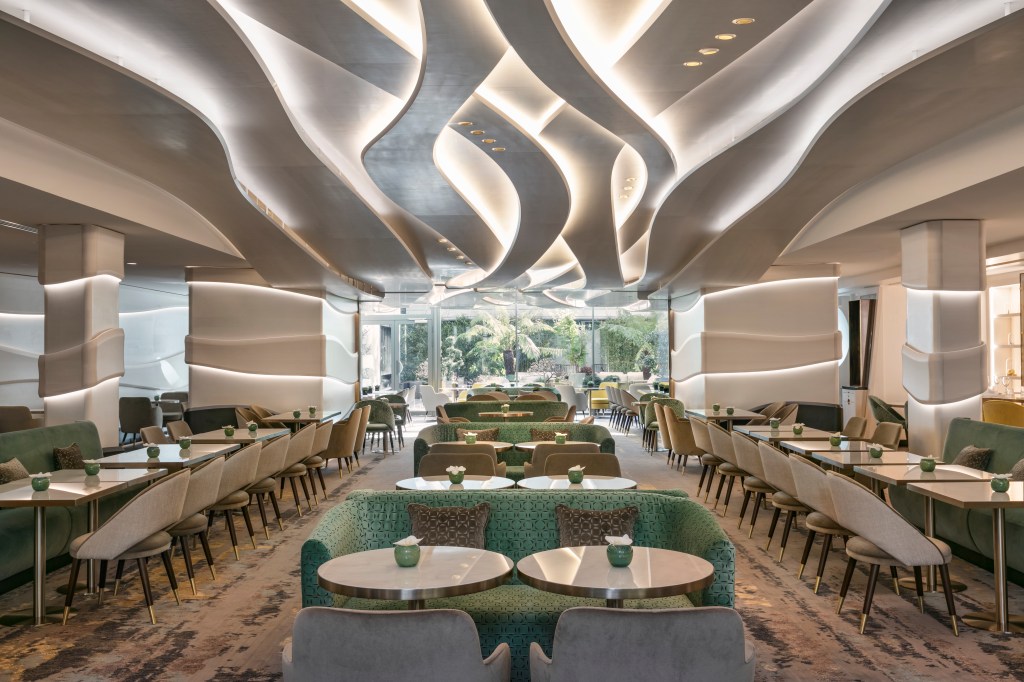 Back in the Autumn, the first thing that would strike first-time visitors entering Hotel du Collectionneur – a five-star hotel located near the Arc de Triomphe and Parc Monceau – was a giant magpie perched atop a nest fashioned from branches and bracken, right in the dead centre of the polished-marble lobby floor. It was an eye-catching piece, to put it mildly, and one that referred to owners Andrea and Edouard Cohen’s wish to cherry pick the very finest artefacts, touches and flourishes when restoring this Art Déco building to its former glory. It also celebrated a huge milestone in the hotel’s history: the reopening of its restaurant.

Part of a family owned hotel company, The Gate Collection, the hotel is justly named in homage to renowned Art Deco designer, Émile-Jacques Ruhlmann, who created a pavilion called Hotel d’un Collectionneur for the 1925 International Exhibition in Paris. In addition to Art Deco-style rooms, the hotel features a chic bar, mosaic spa and aforementioned newly renovated restaurant, Le Collectionneur, which recently reopened in September 2018 following an 18-month renovation. The result is what would otherwise be one of Paris’s most desirable hotels now packing genuine gastronomic credentials too. 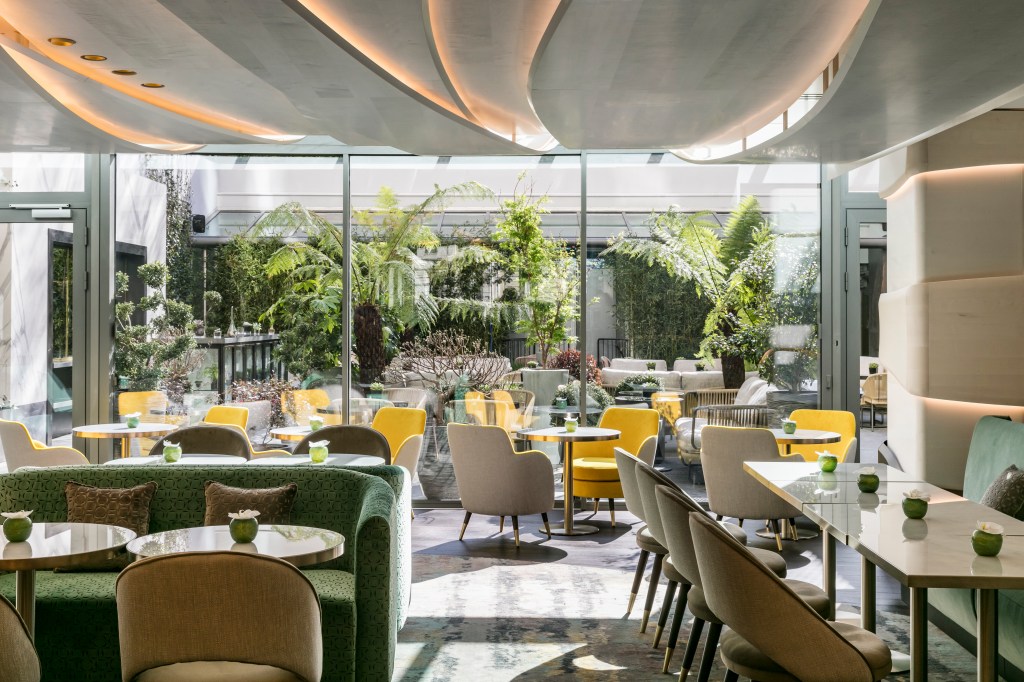 Guests enter the restaurant – having taken in abundant festive regalia, in place of the giant magpie, should they have entered via the lobby – and are met with something even more extraordinary: a 16-metre transversal ceiling in bleached sycamore. Actually, it’s not a celling – it’s more of a ceiling-mounted sculpture. What catches the eye next is likely to be the furniture by Italian designer Moroso: a masterclass in tastefully executed eclecticism, with textures such as marble tables, velvet seats and geometric whimsy all jostling each other for second dibs, behind that ceiling, when it comes to visitor attention.

Look up and take in the whole space, and there’s even more tastefully executed incongruity to take in: a field of fluid lines juxtaposed with more rigidly structured shapes. Materials such as brass, velvet, alabaster and marble sing in perfect harmony with a colour palette which has marble and sandstone bills topping the bill. Another witty touch is the cutlery – gold, silver and bronze, in deference to the habits of that bird in the foyer (who, incidentally, is the symbol on the front of all the menus, this time holding a fork in its beak). 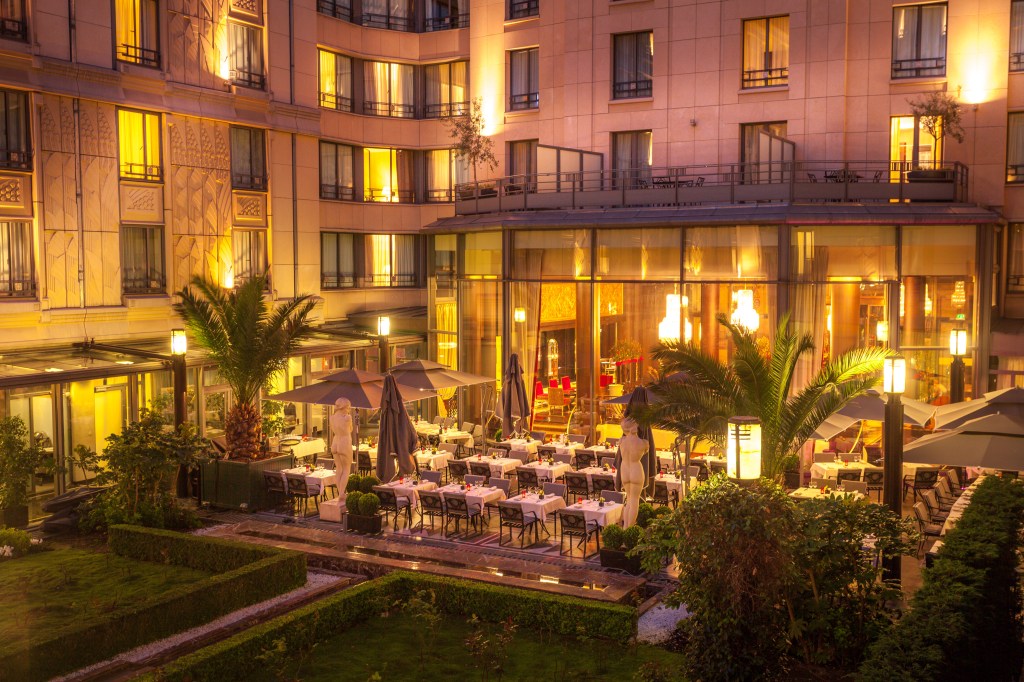 As for the small matter of the cuisine, chefs Joël Veyssière and Nicolas Amelin – both members of the ‘Maîtres Cuisiniers de France – lead a bold gastronomic charge for the often vast number of guests often present (up to 240 indoors and a further 150 outdoors – a necessarily huge capacity given that the hotel has 487 rooms). At the time Robb Report visited, dishes such as sea bream sashimi and an ‘oeuf parfait’ with citrus, bulgur wheat and a watercress crème were competing with seafood classics such as langoustine ravioli and a vegetarian offering of zucchini cannelloni and mushroom caviar.

Aficionados of simpler fare done to perfection opted for an exquisite monkfish with potatoes and picanha of beef with chimichurri and layered potatoes with peanuts. But like any decent menu, this one is dictated by the Earth’s tilted orbit around the sun, as well as Veyssière and Nicolas Amelin’s obsessive attention to detail. The duo’s recommendation for a winter three-course feast runs as follows: seasonal egg and mushroom salad with Ossu Iraty cheese foam and a dusting of ham from Les Aldudes Valley as a starter; the grilled octopus, quinoa and guacamole with passion fruit and kaffir lime oil for a main; La Châtaigne Chestnut sphere with pumpkin and orange sorbet for dessert.

And who are we to argue?

Le Collectionneur restaurant is open Monday to Friday from 12pm to 2.30pm and from Tuesday to Saturday from 7pm to 2am to guests and non-guests, and offers a €48 lunch menu and an ‘A la Carte’ menu in the evenings. hotelducollectionneur.com 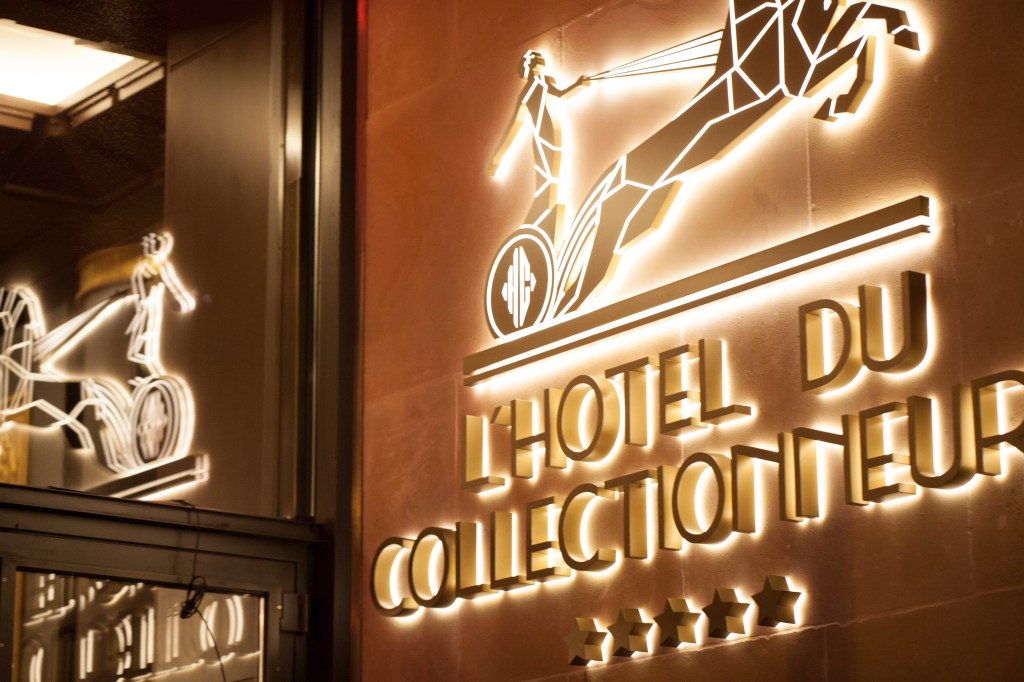