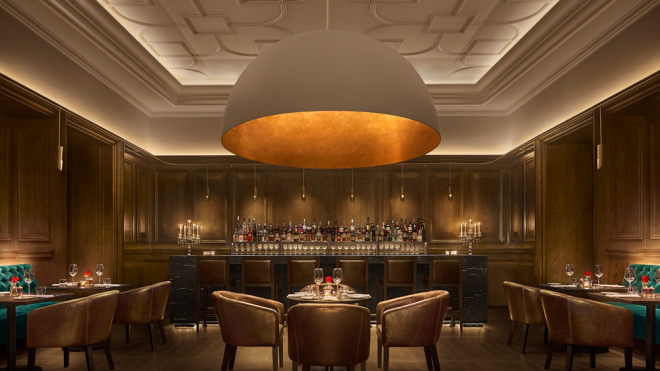 Like Abu Dhabi, the Edition is having a moment. It is only natural then, that the innovative hospitality brand from the ever-enterprising Ian Schrager is readying to open its fourth new hotel in the past six months—and first ever in the region—in the Middle East’s new crown jewel. And in a city where hotels are in an opulence arms-race (think moving from dripping chandeliers and walls in gold to dripping cappuccinos in 24-karats), the Abu Dhabi Edition, set to open in November, is a boldly minimal breath of fresh air.

That’s not to say the property is simple. The hotel sits on the fringes of the Al Bateen peninsula—its façade a complicated latticework reminiscent of the lateen sails of the traditional Dhow boats the region once was famed for building that glints and glimmers in the desert sun. Inside, the brand has applied its restrained aesthetic to Emirati design codes, to, as Schrager puts it, “make references to the local culture, but in subtle kinds of ways, so that when people go to the hotel they feel that this is only [something] that could be in Abu Dhabi at this time.” For the hotelier and his team, this means carving the soaring five-story-tall lobby to mimic the movement of the water outside, and grounding it with signature armchairs by local designer Latifa Saeed that feature silhouettes inspired by the way Emirati children braid their hair. The walls that surround the area are covered in delicate gold leaf—this is still Abu Dhabi, after all. But the effect is meant to be welcoming and warm rather than gob smack guests with luxury as they trade their superyachts moored outside for one of the Edition’s 198 rooms and 57 residences.

Those rooms feature the brand’s signature streamlined wood-paneled look—a welcome reprieve from the sensory overload of the nearby Louvre Abu Dhabi on Sadiyaat Island or the carnival-like Yas Island. Here, tranquil neutrals are only punctuated by views of the water from each room’s balcony (or balconies, if you are staying in one of the two sprawling penthouses), and are complimented by grey oak herringbone floors that nod to local basket weaving techniques and the dramatic sand dune shots by twentieth-century photographer Brett Weston that adorn the walls. Bar the dialed-up luxury of the Marina and Royal penthouses—which are both accessible via dedicated elevators and feature generous living and dining spaces—rooms are paired back, designed to be a place to let batteries recharge before wading back into the scene downstairs.

At the heart of that scene are the three internationally minded restaurants helmed by chef Tom Aikens, the youngest chef ever to be awarded two Michelin stars. Guests can spend a leisurely afternoon circling from the pool overlooking the Marina to the Mediterranean-style Alba Terrace restaurant, or grab a quick bite at the sustainably-minded Market (chef Aikens recommends the green earth burger, which features a chickpea and shiitake patty with eggplant relish, grilled piquillo pepper, halloumi, muhammara and grilled avocado) before heading into the city center. Come dinner time, they can indulge in the Oak Room, where what Aiken describes as a “schuther, which is a role we created that is a mix of a fully qualified butcher and showman,” will prepare their prime cuts in a glass-fronted chiller. They can then head to the Library Bar for gin cocktails mixed tableside, or to the three-floor, indoor-outdoor Annex lounge should they want to keep the night going.

“I know there is a tremendous amount of energy in Abu Dhabi and [some] tremendous buildings,” says Schrager, going on to describe his latest project as, “a world class hotel in a world class country.” And while we’ll leave it up for you to decide how it stacks up to the city’s glittering Grand Dames, something tells us the cool new kid on the block is going to fit right in.