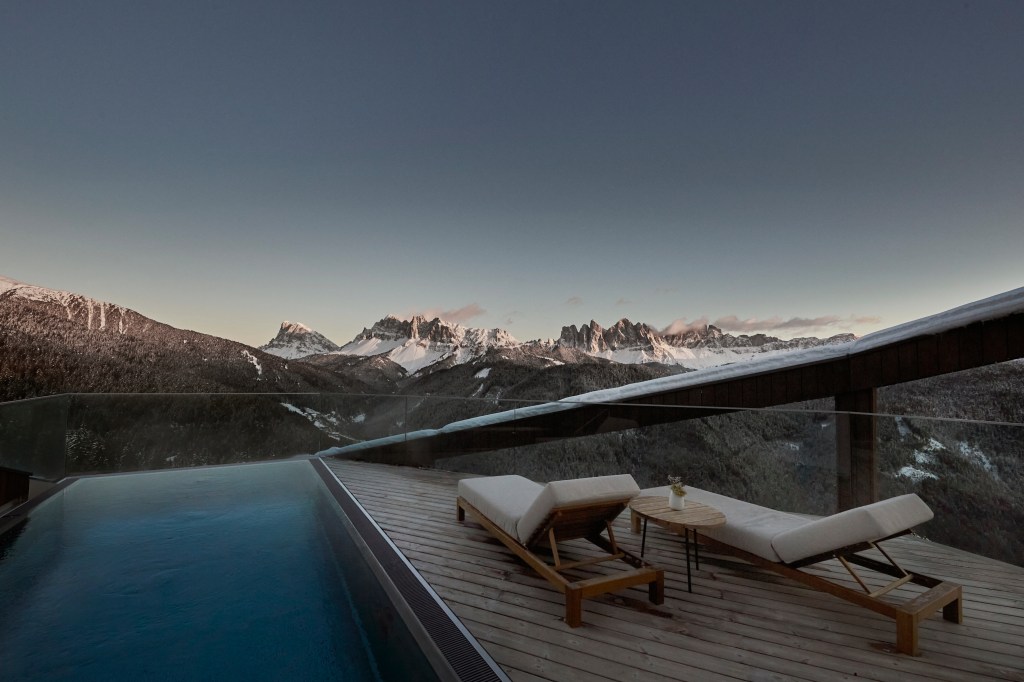 Before Forestis’s owners Stefan Hinteregger and Teresa Unterthiner set about transforming their Tyrolean mountain hideaway into a haven for the terminally busy, their guests used to jostle for a table by the restaurant’s pocket-sized windows.

Beyond them was the sort of heavenly landscape that could bring levity to even the most hellish of dinner conversations. In the distance, a monumental spine of craggy peaks that sliced across the horizon like a giant prehistoric carving knife. At their feet, meandering between the mountains, a valley carpeted in an impenetrable forest of sweet-scented pines. Rivendell, only without the elves. No one wanted their view of this unfolding natural drama, the “door to the sky” as they say locally, obscured by something so lumpen as another human being.

These days, there are no arguments. Following a spectacular €35m reinvention completed during the pandemic, views of the mighty Dolomites from Forestis come as standard – whether you’re in the magnificent amphitheatre-style restaurant with its floor-to-ceiling windows, the indoor-outdoor pool, the spa treatment rooms or one of the hotel’s 62 pared-back, pine-lined suites, each a beigestronaut’s paradise of simple, highly oxygenated luxury. Forestis and its majestic surroundings weave together quite brilliantly.

Indeed, when the young hoteliers (Stefan is still only 32, Teresa just 29) set out their vision for Forestis four years ago, they wanted it to be entirely in tune with nature – “a sustainable wellness resort” as the vernacular has it. Not in a pseudo-scientific way, although there is some brochure babble. More in a slow-down-and-breathe-it-in kind of way.

They had a good start. On the plot is a natural spring that runs with fresh waters from the Plose mountain that rises above it. In towns closer to sea level (Forestis is 1,800 metres up and a half-hour drive from Brixen), people pay good money to drink this water – up here, you brush your teeth with it.

The story of nature continues around every softly moulded corner. Food is, where it can be expected, sourced locally (Tyrolean apples are delicious, it transpires), while for every tree that was cut down to make way for the hotel’s newly erected trio of entertainingly Ballardian towers, two more were planted.

Talking of those modern towers, they were built to match the height of the surrounding trees and wood-panelled so that they would blend into the landscape. One has a bird box on it in a bid to replicate what went before. All three are linked by an underground passage to the main body of the hotel, an early 20th century chalet-style building that was originally conceived as a place of convalescence for patients with respiratory ailments. Abandoned in the 1960s, it was rescued in the mid-2000s by Stefan’s father, also a hotelier, who got it back on its feet.

Inside, there’s liberal use of a warm, putty-coloured plaster that’s made using a powder ground from Dolomite stone and then sealed with beeswax. Throughout, the lighting is clever but unobtrusive, and there’s no plunky music funnelled into the corridors. The hotel is techy, but never imposingly so, and there’s no art up on the walls, because frankly, with these views, who needs a painting? It’s all so extraordinarily balanced and considerate, every visual and haptic detail executed with Austrian (few in these parts consider themselves Italian) levels of care and precision. Simple luxury, indeed.

As is obligatory nowadays, wellness is at the heart of the set-up, too, and from the rustic thimble of pine syrup we’re offered on arrival through to the signature healing stone massages we drift lazily through the following afternoon, every step of the way is deliciously, immediately calming.

But not oppressively. Forestis, as our guide is eager to assure us, is not a clinic, but a place for a holiday. Guilt is off the menu, he says. Speaking of which, this omnivore was glad to find a truly memorable steak tartare among the delicacies coming out of head chef Roland Lamprecht’s “forest cuisine” kitchen each evening. Dinner is included in the room rate, and you’re encouraged to mix the set and à la carte menus, removing any awkwardness at having to negotiate dietary artichokery.

Exercise is encouraged, mind. In winter, guests can ski-in and ski-out, with more than 50km of slopes to explore in between times, but we’re here in mid-summer, when the opportunity is to hike, bike or join daily Wyda classes, a form of yoga based on local Celtic principles and said to “address life energy” and “harmonise energy flow”.

Given we’re only here an achingly brief 36 hours, leaving the children and the dog behind, we take the guilt-free option and instead lounge on one of the many daybeds by the pool, breaking a quick sweat exclusively in the “textile sauna”, a 65-degree hothouse and the only one at Forestis where one is not obliged to remove every item of clothing.

We’re assured the hotel is at capacity, but if it is, it doesn’t feel it. Forestis is a place to be seen, and yet here you can expect barely to be seen at all. Staff number almost one per guest, the site is large by boutique hotel standards, and there’s a reassuring culture of privacy and discretion.

Nowhere is that more apparent than back in the restaurant, where tiers of tables are cupped by high-backed, horseshoe-shaped banquettes that neatly obscure your view of everyone else, and everyone else’s view of you. People-watchers may object, but then as the shadows climbed the mountains, pushing the pink embers of the day off their peaks and into the dusk, we felt we had front-row tickets in nature’s own IMAX.

We left Forestis utterly charmed by its soft-touch luxury, wondering only why the Tyrolean Dolomites remain off-piste for so many travellers. Perhaps it’s because they’re relatively inaccessible – Forestis is more than two hours from the nearest airport, but then much of its appeal is in its seclusion.

As we leave, we notice our guide greeting two guests, a couple, like old friends. “People come back here because they realise it’s the most relaxing place in the world,” he says. Somehow, we believe him.

Prices start from €660 a night for a suite, including breakfast and dinner for double occupancy. Healing Holidays can arrange a three-night stay at Forestis from £949 per person sharing, including flights, transfers, daily breakfast, access to spa and group exercises.

See below for more images.