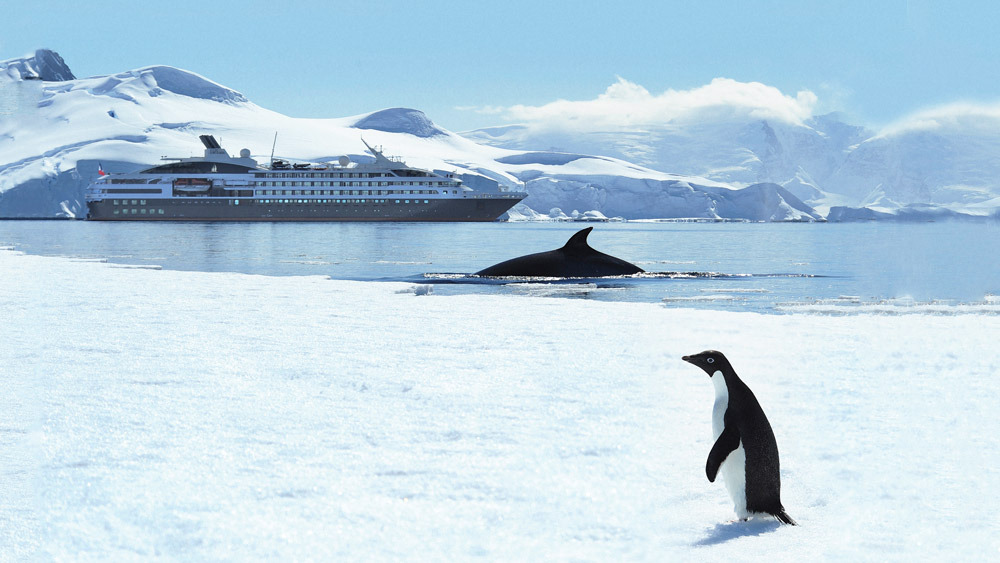 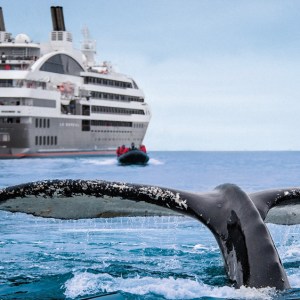 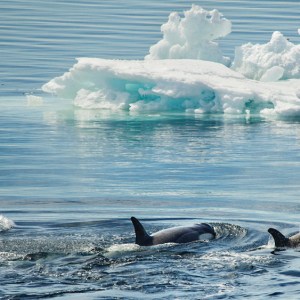 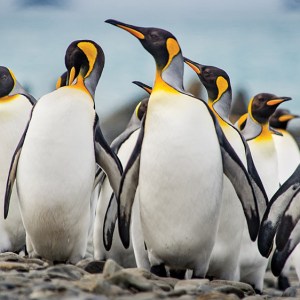 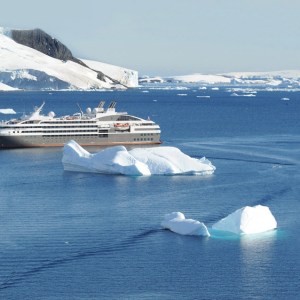 Captain Etienne Garcia whispers. “I’m sorry to wake you, but you must come see the orcas—they are swimming just off the port side of the bow!” My eyes snap open. What time is it? How did Captain Garcia get into my stateroom? A sliver of white light—so bright it can only be from the high-noon sun—creeps through my blackout curtains and draws a laser-sharp line across my bed. I grab my watch—only 5:20 am. Of course; at negative 63 degrees latitude, even the earliest of morning hours looks like the middle of the day. And the captain’s exclamation? Just an announcement over the ship’s intercom system. It’s too early, I decide—even for killer whales. “Good morning!” Captain Garcia says again, just as I’m dozing back into sleep. He’s no longer whispering; he’s far too excited. “There are humpbacks now—and a baby! The orcas are encircling them! This is incredible!” Then, as if speaking directly to me: “Do. Not. Sleep. On. This!”

I’m out of bed before I realize it and walking down the hall in my bathrobe toward the captain’s bridge, where I discover nearly every passenger aboard the 132-suite Le Boreal has already gathered around the thick glass encircling a giant switchboard of gizmos and dials. Some have thrown their bright red expedition jackets over pajama tops and set out into the brisk cold of the bow deck for a better vantage. Others stare intensely through binoculars as Captain Garcia yells a play-by-play commentary of the action: “They are heading starboard side! The whale has breached! They’re 10 o’clock! Everyone, portside!” With each directive, our group shifts from one side of the ship to the other, oohing, ahhing, and snapping photos all the while.

This is life aboard an Antarctic cruise. Unlike other cruises, this one—operated by the French cruise company Ponant (11-day voyages from ££8,368 per person *according to current Euro-Pound exchange)—comprises not activities but adventures. The itineraries are fluid and unpredictable, dependent on the whims of one of the most inhospitable and mercurial places on the planet. 9-metre swells and ultrafast winds and frigid temperatures that can freeze a passage only hours after a ship has sailed through it all make for a truly intrepid expedition at the farthest ends of the earth. Every day brings a new mission.

One day, we summit the highest point of a mountain at Neko Harbor, then shudder when the crash of a nearby avalanche floods into Andvord Bay. On another, we pile into Zodiacs and dart through narrow passages between icebergs. Smaller ones bob like phosphorescent buoys; giant ones stretch for nearly half a mile, covered in tightly packed snow accumulated over hundreds—maybe thousands—of years. One morning, we wake up to find that Captain Garcia has sailed Le Boreal right into the edge of a massive ice sheet. We disembark and explore the vast stretch of white, sipping Champagne and giggling at a trio of penguins that wander into our impromptu party. And when we finally land on the mainland itself—not the ice sheets or the surrounding islands bearing names like Deception and Spert—the entire ship cheers: the passengers, the guides, the chefs, the bartenders, and, perhaps louder than anyone else, Captain Garcia.

Still, however intrepid this cruise may be, there’s nothing expedition-like about Le Boreal. Although the ship is reinforced for polar missions, its interiors are yacht-like, its service attentive, and its French-leaning cuisine excellent (especially considering our distance from anything remotely resembling a farm or market). It’s small enough to feel intimate—and to allow for nimble navigation of even the most treacherous waters—yet large enough to allow for plenty of room to stretch out sans the company of other passengers. And it’s strong enough to handle those 300kph winds and towering waves like the steeliest of vessels. On days when the weather is bad, which happens with some regularity, there’s nary a complaint to be heard, as we engage in a riveting lecture on the mighty albatross or clever Gentoo to feed our venturesome spirits. There’s also the knowledge that at any moment, Captain Garcia might interrupt our dinner, our afternoon tea, or even our contented sleep with the announcement of yet another extraordinary adventure just off the bow.