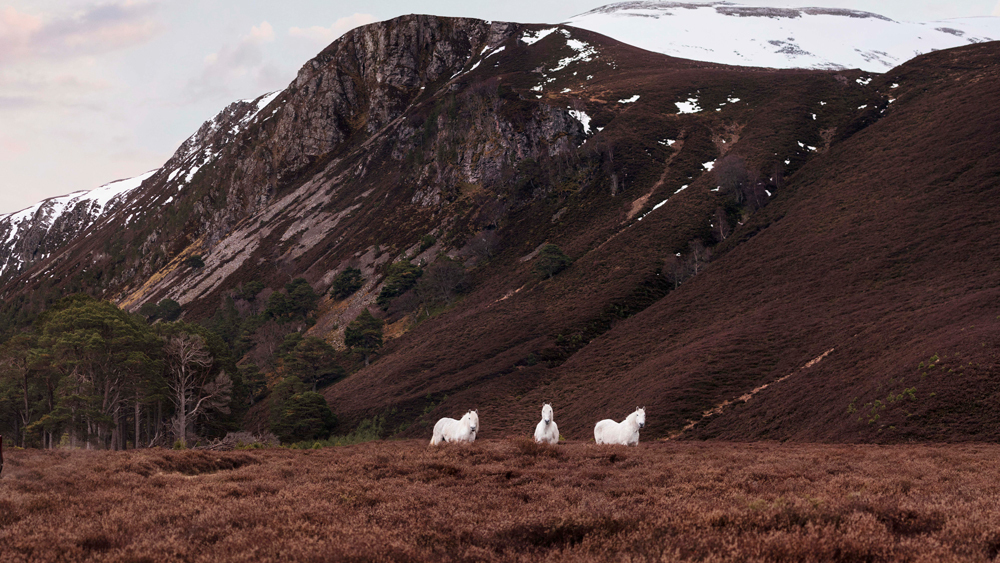 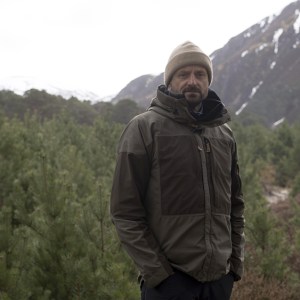 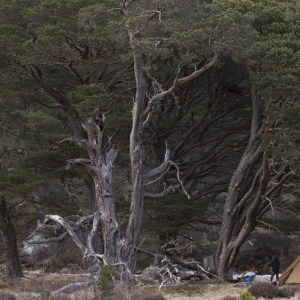 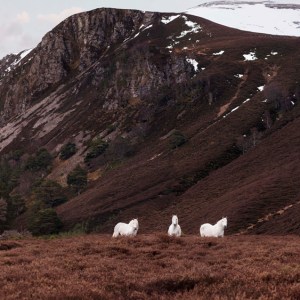 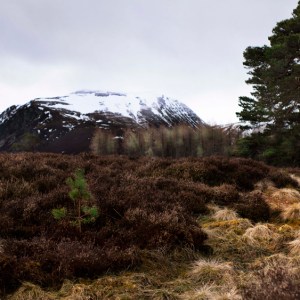 “I’m going to leave you there.”

Hamish Mackay-Lewis is standing on the edge of a pine grove somewhere deep in the Scottish Highlands, teetering over a roiling river, and pointing toward a small island being pummeled by rain. There is no path or bridge, no boat or dinghy—only icy water slapping against the shore and a slippery slope on the other side. This wasn’t what I had expected when I agreed to go on a hike.

“I’ll come back for you in a couple of hours,” says my guide—a term I am beginning to question given the circumstances. But before he leaves me to wade into the water, he gives me a directive. I’m to spend my time on this unpleasantly cold and wet isle pondering a single question: What is my definition of success?

And with that, he is gone.

Like a soldier with marching orders, I ford the river, scale the slope, and slog through the island’s heather and moss until I reach a cluster of trees on the far shore. Physically and mentally exhausted, I pull a poncho and blanket from my backpack, wrap myself in both, and lie down beside the thickest trunk I can find. Forget success—rest is the only thing on my mind. So, I pull my blanket tighter, close my eyes, and drift off to sleep.

Of course, I should have seen it coming. Forty-eight hours ago, on the train ride from Edinburgh to the old Gaelic town of Kingussie, I had clutched in my hands a mysterious letter that had practically foretold my abandonment.

We look forward to hosting you in Scotland for your Extraordinary Adventure Club retreat, the message began. Digital communication is nonexistent given the remote nature of the place, and therefore periods of time without contact are to be expected. Your phone and laptop will be removed upon arrival at the location and returned to you upon completion. Then, most forebodingly: Please do make your next of kin aware of these details.

The letter had arrived at my Los Angeles doorstep one week earlier, along with a battered FedEx package that contained five black envelopes. Inside each, I found a clue to the journey that lay ahead: a selection of books, including Viktor E. Frankl’s Man’s Search for Meaning; a Moleskine notebook; a mechanical pencil; and a list of questions that included “What is my purpose in life?” and “What is my long­held personal belief about myself?” But as my train rolled into Kingussie station, I was mostly wondering what the hell I had gotten myself into.

The platform was deserted except for a tall and slender man in his late forties. I knew instantly who it was: Calum Morrison, the founder of the Extraordinary Adventure Club (EAC), a clandestine society that promises journeys in what its website nebulously calls “self­ discovery and self­ mastery.” From the moment we shook hands and set off on the one­ lane country road leading to—well, I wasn’t quite sure where—it was evident that Morrison was a measured man. His background as a former Royal Marine couldn’t have been more obvious if he were wearing fatigues and a green beret. Confident yet unassuming and utterly controlled, he clearly drew from his years as a soldier in everything he did, especially in developing the EAC.

“It’s about finding the edges of your capabilities and stretching them,” he said, steering his pickup truck over a narrow bridge crossing the River Spey. “When you think, ‘I can’t go any further,’ and then you do—and then you do it again—you gain supreme confidence in your ability to adapt and overcome in any environment.”

I had heard the stories of the “environments” EAC’s past clients had been required to adapt to—the Amazon basin, the Arctic Circle, the Sudan desert—but Morrison was quick to point out that his club isn’t a travel company. It’s a program (and one that comes with a significant price tag at that, starting at about £250,000 per person) designed to push participants beyond their comfort levels—and demonstrate the rewards of doing so—through a combination of physical training, survival education, and professional and personal coaching. EAC’s clients are often seeking direction at pivotal points in their lives: a second-generation family member preparing to inherit a business; a recovering addict looking to bolster his clinical rehabilitation; an executive who has relied on assistants and aides for far too long. Each program starts with a private three-day retreat, usually at a 14,500 hectare private estate in the Scottish Highlands, followed a month or two later by a 10- to 14-day guided journey that Morrison and his team design specifically to address the issues they’ve identified with the client.

My journey, however, started just 15 minutes from Kingussie station, when Morrison pulled over on the side of the road and told me to change into hiking boots and pants. We set off by foot along a tributary of the Spey, following its bends and curves through a valley wedged between the bulbously beautiful Cairngorms mountains. We crossed the river at the trail’s end, walking calf-deep through the water until we reached a cluster of three white cottages on the other side. Waiting for us there was EAC’s renegade team of advisors: Malcolm Williams, a life coach whose specialties include treating patients with post-traumatic stress disorder; Rob, a self-described “survivalist geek” whose last name remained a mystery in order to protect his identity as a former UK Special Forces soldier; Adam Fry, an adventurer and environmentalist; and Mackay-Lewis, a dashing former British army officer who would in a couple days’ time leave me stranded on an island.

Rob put me right to work, interrogating me about my health habits before running me through a vigorous workout of lunges, push-ups, wind sprints, and more to assess my ability to handle the challenges I would face over the next 72 hours. After a vegetarian lunch, I sat down with Williams for a three-hour coaching session that covered everything from the power of the subconscious to my relationships with my teenage children.

This combination of intense strenuous activity and contemplative self-examination would prove to be a pattern. The next morning, Morrison, Mackay-Lewis, and I jogged to a deep stretch of the Spey, where we swam in sub-8-degree water—an activity they claimed has meditative-like effects on the brain. I then sat down for another three-hour session with Williams. Later, I alternated between building a forest shelter and visualising myself 20 years in the future through semi-hypnosis.

The constant push and pull of alternating phases of physical and mental discomfort were all by design, though it was a design to which I was never quite privy. I didn’t know what I’d be doing next, when—or if—I’d be eating, or where I’d be sleeping for the night. “The more you try to hold tightly onto the illusion of control,” Morrison told me, “the less freedom you give yourself to act.” So when Mackay-Lewis instructed me to pack a 24-hour stock of supplies for our afternoon hike through the woods, I thought I had learned well enough to expect nothing and prepare for everything.

By the time I wake up on the island, the downpour has settled into a steady shower. Drenched, delirious, and disconcerted at the sight of a giant black slug (or is that a leech?),  I struggle to my feet and wearily pull my poncho tighter over my head. But as I explore bit by bit, my shivering subsides and my curiosity consumes me. Suddenly, desertion begins to feel more like discovery. I hide in a ditch and then climb a tree before wading into the river to skip rocks and search for trout. Hey, I think to myself, if the weather were a bit drier, I could be happy here for days.

It is then that the answer to Mackay-Lewis’s question strikes me: Success is the ability to do what I want to do. Given the elaborate process it took to arrive at it, my epiphany seems a bit quaint. And yet, my mission accomplished, I feel a twinge of hard-earned triumph.

A half-hour later, just as the long-absent sun emerges from behind a cloak of grey sky, I am both relieved and disappointed to see Mackay-Lewis appear among the trees across the river. I wade back to the opposite shore and follow him to a serene stretch of valley where Morrison, Fry, and Williams have erected a teepee campsite for the night. As we heat our vegetarian stew over a blazing campfire, we pass a flask of Speyside single malt around, and Morrison regales us with tales of negotiating with rebels in Libya, sailing fjords in Norway, and climbing the majestic Cairngorms that loom just overhead. As a young boy, he often explored the range’s imposing peaks with his father and brother. Wider than they are tall, and with nearly indiscernible summits, the mountains, he says, bring challenges—both physical and mental—that prepared him for life.

“You always think you’re approaching the top, but you never quite seem to reach it,” he says. “Even when you do, it always looks like there’s something higher and better up ahead.”