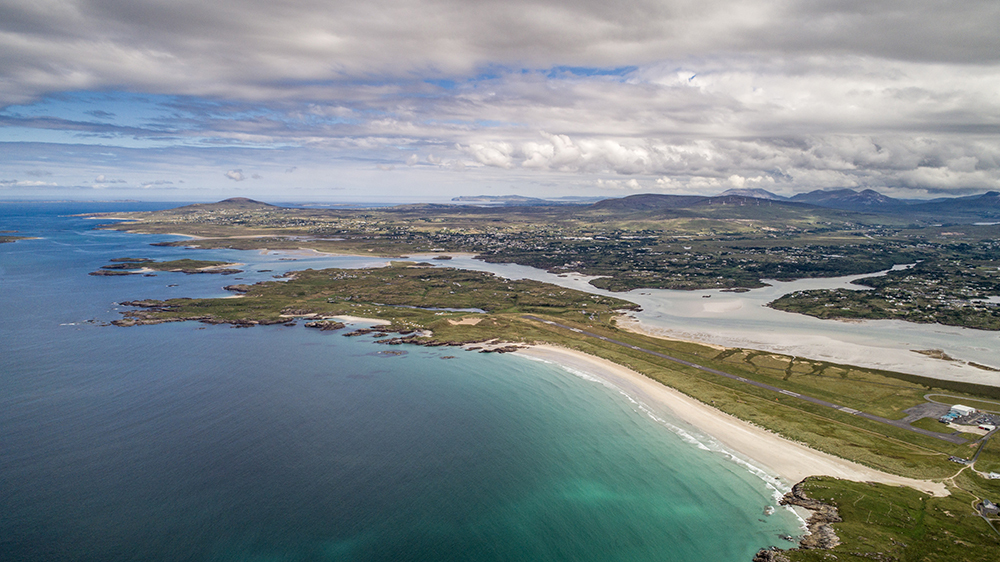 The final descent is usually one of the better parts of a flight—if only because it means the flight is just about over. But there’s another factor that can make those last few minutes before you land especially enjoyable: the scenery surrounding the runway. Prompted by that premise, the UK-based global charter broker PrivateFly recently conducted an online poll of travelers to determine the world’s top-10 scenic airport landings.

The No. 1 pick was Donegal Airport (shown top and below), on Ireland’s rugged northwest coast. “The view is spectacular!” one of this year’s voters wrote. “Mountains on one side and beautiful rugged coastline dotted with islands and golden sandy beaches running adjacent to the runway.”

This is the third time PrivateFly has conducted such a poll. The first was in 2013, and the second was last year. Donegal Airport topped last year’s list and finished in the top 20 in the first poll.

Formerly just a grass landing strip, Donegal opened as an airport in 1986 with a hard-surface runway that is now 4,900 feet long and can accommodate regional airliners as well as prop planes and private jets. “There is nowhere as lovely as the wild rugged beauty of unspoiled Donegal,” wrote another voter.

PrivateFly conducted the poll in February and received more 7,000 responses. Beforehand, the company enlisted a panel of travel and private-aviation experts to create a list of candidates for voters to consider. Their shortlist included 129 airports. Among the experts was PrivateFly CEO Adam Twidell and Kenn Ricci, the principal of Directional Aviation Capital, which acquired PrivateFly last fall. Directional Aviation also owns FlexJet and Sentient Jet, among other private-aviation companies. Ricci nominated Narsarsuaq Airport in southern Greenland and Innsbruck Airport in the Austrian Alps for the shortlist. Twidell’s nominations included Al Maktoum International Airport in Dubai and Gibraltar International Airport.

Second place in the poll went to Barra Airport, which is set on a beach at the northern tip of Barra island in Scotland’s Outer Hebrides. It has three runways, each marked by wooden poles in the sand; they can accommodate only small prop planes. At high tide, the runways are under water. “I just love the remoteness of the Isle of Barra and its rugged terrain,” wrote a poll respondent. “Landing on a cockleshell beach is quite the experience, too. Make sure the tide is out!”

Nice Côte d’Azur Airport in the South of France finished third in the poll. “Mountains, sea, city and the Promenade des Anglais—this airport has it all,” wrote one voter. The airport is the main point of arrival for travellers to the French Riviera, and it serves as Monaco’s primary airport.

“First, you see the beautiful Atlantic Ocean and then pass over the Indian and Banana Rivers,” wrote a survey respondent who selected Orlando Melbourne. “Then, there is a pass over the Kennedy Space Center and Cape Canaveral Air Force Station, where you may get a glimpse of a rocket on a launch pad.”