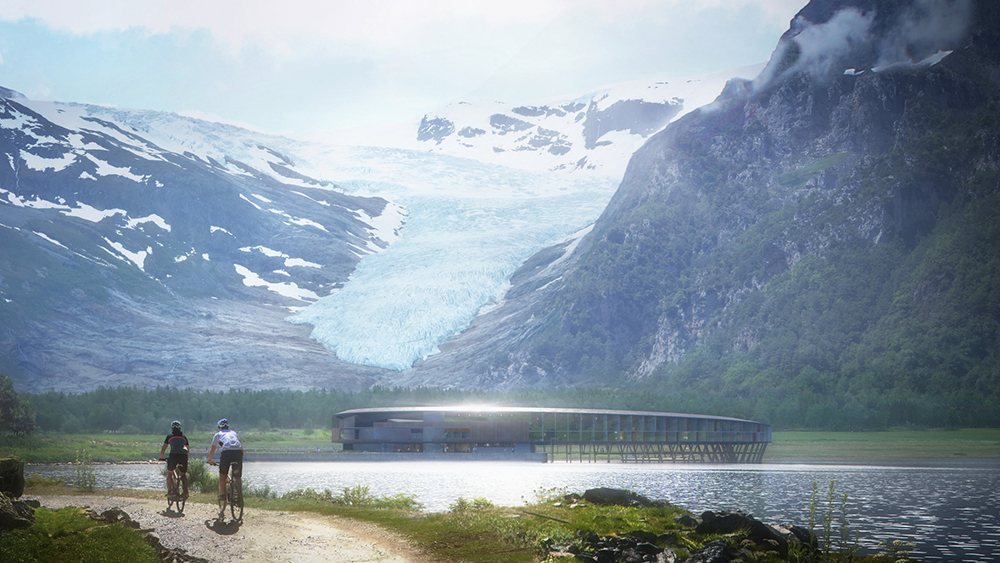 Six Senses already operates 21 hotels and resorts in 17 different countries – but its new Norway location is going to stand out in a big way.

Located at the foot of the breathtaking Svartisen glacier, the Six Senses Svart will be the first energy-positive hotel on Earth when it opens in 2024, according to the brand.

Inspired by a coastal fisherman’s cabin known as a rorbu, the 94-room hotel will be carefully suspended above the Holandsfjorden fjord via poles that minimise the impact on the surrounding glacial environment. The distinctive building, which takes cues from a wooden structure for drying fish known as a fiskehjell, will be outfitted with the latest green technology. In fact, Six Senses says the property will harvest enough solar energy to power not only the hotel, but all other adjacent operations. This includes the net-zero boat that will shuttle guests sans emissions to and from the remote destination.

Six Senses Svart will harvest enough solar energy to power the hotel and all other adjacent operations.  Six Senses

Even the construction of the hotel will be carried out using solar energy. This means Six Senses Svart will be completely off-grid and carbon neutral. It will also be self-sustaining, with its own waste and water management system and recycling infrastructure.

“The concept has become bigger than the project itself, as it will provide a futuristic showcase for what can be achieved in terms of sustainability and energy solutions, and therefore a blueprint within our hospitality industry and the development sector in general,” CEO of Six Senses Neil Jacobs said in a statement.

That’s not to say the hotel is short on luxury. Showcasing superior craftsmanship, the sustainable Scandic interiors will feature an array of earthy, organic materials throughout, as well as artwork and furnishings honouring local heritage.

The 94-room hotel will be carefully suspended above the Holandsfjorden fjord with poles.  Six Senses

Naturally, you can expect a strong focus on health and wellbeing that has become synonymous with Six Senses. There will be the signature programs centered around the six dimensions of wellness, for instance, along with a new technology called Svart Touch that is said to adapt each room to the guest’s state of mind. You can embark on everything from vitamin IVs to pampering scrubs during your stay.

The hotel will also house an Alchemy Bar highlighting regional healing techniques, an Earth Lab showcasing various eco-initiatives and a Svart Design Lab displaying the green tech. Elsewhere, there will be a zero-waste restaurant and bar that will serve up fresh local produce sourced from local suppliers.

This Norwegian outpost could be the beginning of a new era, too, as Six Senses has a further 33 properties in the development pipeline.