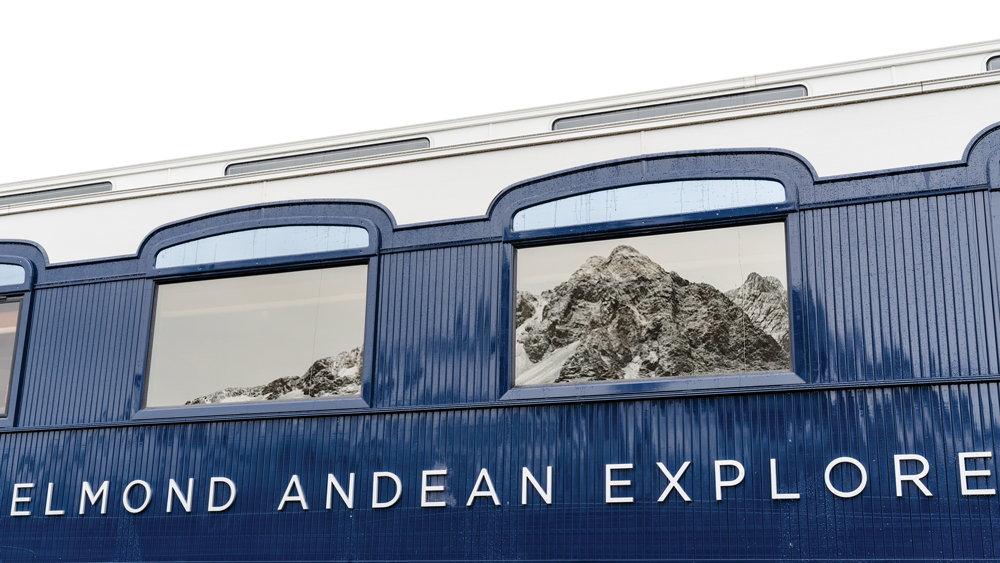 It’s hardly breaking news that long-haul airline food makes you lose the will to live—or certainly wish you’d eaten before boarding. Once a reheated foil tomb of unidentifiable slop is thrust in front of you, you then enjoy the absurdly awkward ballet of endeavoring to eat it without your elbow taking out a fellow passenger’s tray—or indeed the passenger themselves.

Thankfully, however, there’s a far, far classier way to dine and travel at distance: on a train. If you’re thinking a stale egg sandwich and stale-r coffee, think again. Luxury trains not only take you to some of the world’s most remote and beautiful places, but they also serve up dishes that wouldn’t look out of place in a Michelin-starred restaurant—let alone one where the kitchen rattles along at 70 miles an hour.

Here are seven gourmet journeys around the world where you’re always on track for delicious dishes—along with a side order of breath-taking views.

As aperitifs go, it’s tough to beat. The Observatory Car of the Belmond Andean Explorer lets you sip a perfectly crafted Pisco Sour as you wind your way at elevations of up to 16,000 feet through the majestic Peruvian Andes. The country’s first luxury sleeper train offers jaw-dropping landscapes at every turn, but the plates in their elegant dining cars also really vie for attention.

Always seasonal and always reflecting the remarkable produce of the Andes, menus are designed by the chefs at Belmond Hotel Monasterio in the ancient Incan capital of Cusco. That could mean tender alpaca with Andean cereals and pumpkin cream, or “chocolate textures” which demonstrate Peru’s vast diversity of cacao. The one- and two-night trips link destinations including Peru’s second city of Arequipa and legendary Lake Titicaca, while they even have a separate train, the Belmond Hiram Bingham to whisk you to Machu Picchu in unmatchable style—accompanied by more beautifully crafted dining throughout the daytrip.

Japan represents in many ways the pinnacle of rail travel thanks to its legendary shinkansen bullet trains which cross the country at speeds up to 200 mph. Sleek, futuristic and always—that’s always—on time to the second, they also offer one of the great railway dining experiences through a dazzling array of bento boxes, known as ekiben, to be eaten at your seat. Pretty much every station will sell them, often featuring local specialties and produce, leaving you only with the challenge of what to choose.

Bento boxes are generally an entire meal, with salads and pickles, dessert and rice all usually included. You could opt for beautifully seared mackerel with a wedge of lemon, teriyaki chicken or fried beef over rice. Naturally, the sushi and sashimi are exceptional, better than you’ll find in many renowned Japanese restaurants in the United States, while wagyu steaks are even an option in some places. Whether you’re a hungover salaryman in need of carbs or a grandmother on a day trip, every passenger will have their favourite dish and spot to find it—while absolutely everyone takes all their trash with them and leaves their seat as spotless as they found it.

In 2020, the luxury tourist train known as Rocky Mountaineer, taking guests between Vancouver and the Canadian Rockies, celebrates its 30th year. More than two million passengers have kicked back to some of the best scenery that Western Canada can offer on three routes that run from mid-April thru mid-October. Handily, the fleet of trains are all domed, meaning that you get great views from pretty much every angle, regardless of where you sit.

Depending on the level of service you go for, meals are served either at your seat or in a dining room, but dishes invariably showcase locally sourced produce from Western Canada and the Pacific Northwest such as fresh British Columbia salmon or Alberta beef. Meals are also accompanied by complimentary British Columbia wines and beers, along with high-end spirits.

The Alaska Railroad’s flagship train is the Denali Star that runs for 12 hours from Fairbanks to Anchorage—and in reverse. On clear days, there are unbeatable views of North America’s highest mountain, Denali, while there are also countless wilderness landscapes to take your breath away. Something of an Alaska icon—especially given how it traverses remote country that is otherwise largely unreachable—you can’t help but feel the frontier spirit as you experience Alaska the slow travel way.

Lunch could feature reindeer penne Bolognese that channels both Alaska and Italy, or a smoked salmon sandwich with caper salad. Dinner gets hyperlocal with plates such as Alaskan cod with a crust of Alaska kettle chips, aioli and a slaw of birch syrup, or maybe slow-braised pot roast for those needing reheating on an especially frigid day. The desserts section on the menu is cutely named “the end of the line.”

The Indian Pacific train is one of Australia’s two great long-distance rail journeys, an iconic route linking two oceans that are separated by 2,704 miles of breathtaking vastness. Running from either Perth or Sydney, you spend three nights watching landscapes change as brilliantly named spots in the middle of nowhere such as Cocklebiddy and Pinkawillinie pass you by.

Onboard the extremely comfortable train, seriously impressive food and wine never seems to stop coming. Its top level of package called Platinum Club includes wines and spirits, while food wise you could dine on Pacific Ocean swordfish with puy lentils and olive tapenade, or slow-cooked pork belly with miso, crackling, pumpkin puree and apple and celery slaw. For more tastes of Down Under, saltwater barramundi and grilled kangaroo fillet are also popular choices.

If you’ve never enjoyed pancakes at breakfast while watching giraffes run alongside you, then maybe a trip on South Africa’s The Blue Train is in order. They call themselves ‘a window to the soul of Africa’ and 31-hour journey between Pretoria and Cape Town certainly lets you experience the country’s spectacular scenery—as well as a lot of its wildlife—along the 994 miles of track. There are other options including up to Victoria Falls or to the edge of the famed Kruger National Park.

One you’re all aboard, fine china, crystal and smooth jazz are the backdrop to proudly local ingredients such as ostrich, venison and Karoo lamb that graze on the fragrant pastures of the country’s grasslands called veld. From the stunning coastline come Knysna oysters, lobster and other sought-after seafood. South African cheeses and Malva pudding—a cakey dessert with apricot jelly that’s a local favorite—could finish dinner, while you can even retire afterwards for a Cohiba in their Club Car.