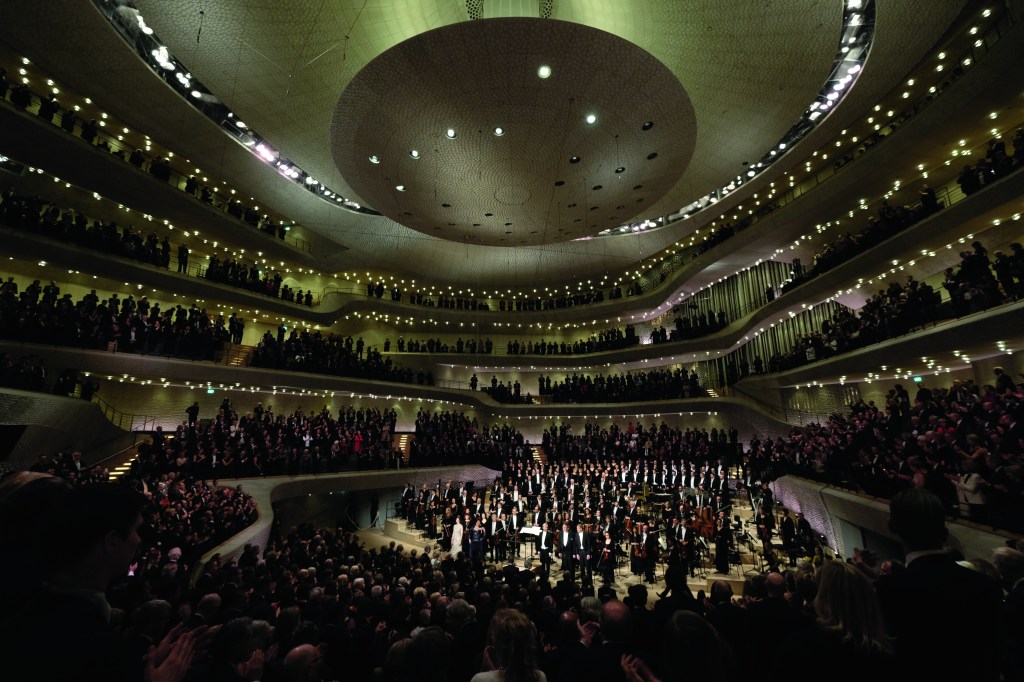 Months after its official opening in early-2017, The Elbphilharmonie still smelled of freshly planed wood, of those shavings that fall to the floor as something wondrous takes shape in an artisan’s workshop. Indeed, oak lines the walls, foyers and stairs of the glamorous Grand Hall. The stage is of ash, while the rippled, burnished oak of the sibling Recital Hall is straight from the Loire Valley. So, a fine vintage already. Hamburg’s new €789m ($1233 million) concert hall beside the Elbe River, reaching 108 metres above sea level, is the most unlikely marriage of a ’60s warehouse that stored tea, cocoa and tobacco and a ‘lid’ of both flat and spherical glass panes, and a loopy roof adorned with 5800 powder-coated aluminium sequins, each almost a metre wide, that mirror the moods of the city.

The Elbphilharmonie’s ‘waistline’, at 36 metres, is belted by the Plaza, a public space reached via an 82-metre-long escalator encased in a tube whose sides are lined with 8000 large, muted glass discs. Concert tickets aren’t required to check it out. The new landmark came in at somewhere between eight and 10 times the initial budget, took nearly 10 years to complete, endured public disquiet, a parliamentary inquiry, contract conniptions and periods of suspended work while the dramas were sorted. None of that stopped local philanthropists tipping in an extra €57.5m ($90 million). And the fact locals now affectionately call it ‘The Elphie’ suggests all is forgiven.

Not least because the new building, which also incorporates a 244-room hotel and 45 residential apartments, is expected to boost annual visitations to the city by several hundred thousand people in the coming years. The key challenge, according to Japanese acoustic guru Yasuhisa Toyota, was finding a balance between the unique architectural design and the seating layout, while suspending the halls from the ceiling to isolate them from outside noise. Toyota has overseen the acoustics for concert halls in New York, Kansas City, Shenzhen, Helsinki and Copenhagen, as well as the acclaimed Suntory Hall in Tokyo. Asked what he was seeking for the Elbphilharmonie, he said: 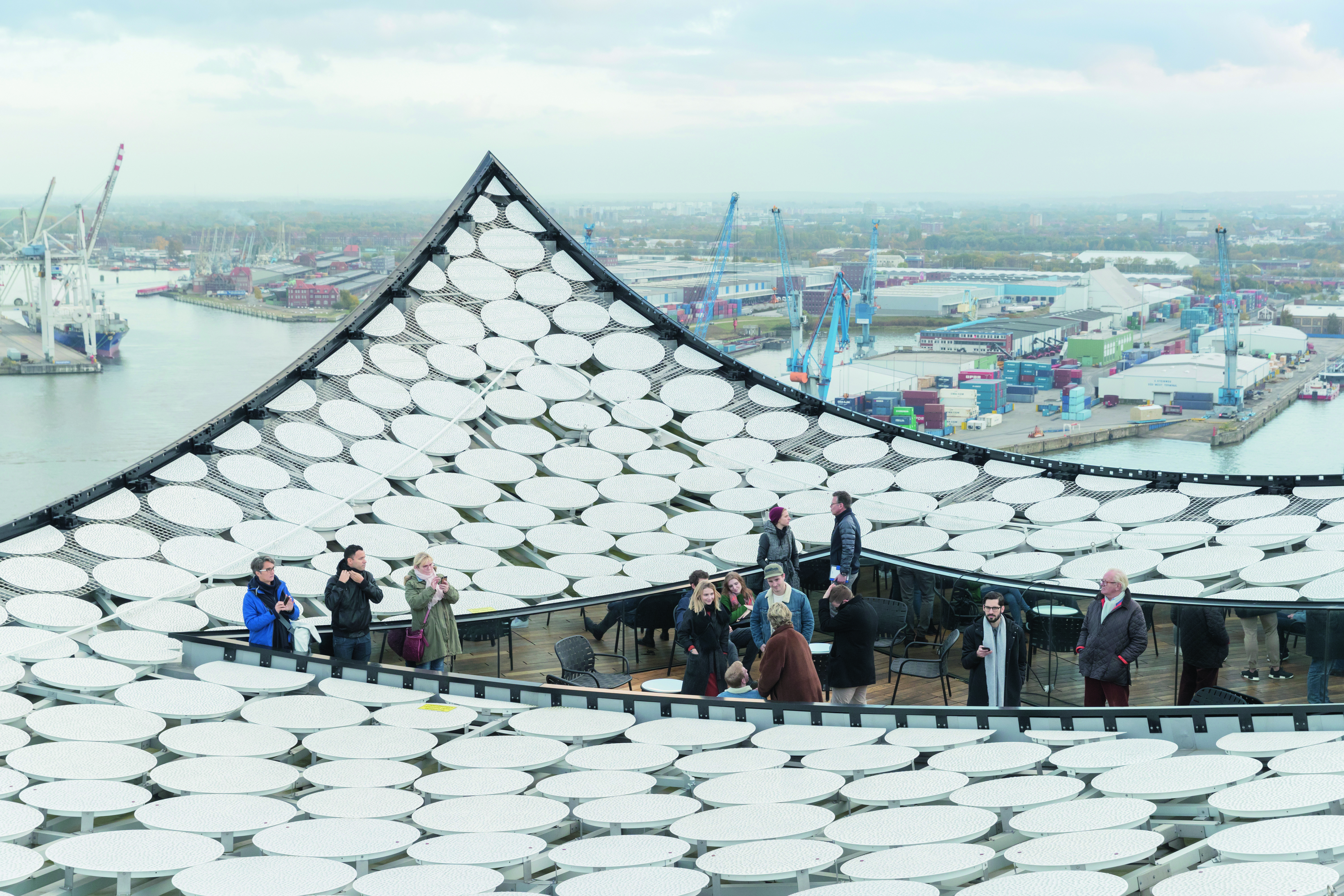 The Grand Hall has a ‘vineyard’ arrangement of seating. The musicians – up to 250 – are in the centre and no audience member is more than 30 metres from them. Central to the acoustics is a ‘white skin’ cladding of 10,000 3D-milled gypsum fibre panels. Swiss architecture firm Herzog and de Meuron collaborated with One To One’s computational whizkid Benjamin Koren to come up with an algorithm that would generate a different shape for each of the acoustic panels. A special sound-diffusing pattern was applied to each piece. The overall effect is of an elegant, albeit apocalyptic, coral reef that seems to encrust walls, balustrades and ceiling.The Grand Hall, which can seat 2100, is like the kernel of a nut: decoupled from the rest of the building on steel springs and completely insulated so no outside world comes in and no sound escapes its chamber. It is lit by 1000 glass waterdrop-shaped lights that were mouth-blown in the Czech Republic. Under the ceiling of the Grand Hall sits the hubcap-shaped Reflector, 15 metres in diameter, which ensures sound is perfectly distributed.

It also conceals many of the hall’s technical functions, including a remote control for the 25-ton organ, which has a silver fringing of 4765 pipes located in, next to, and behind seats made of fire-resistant and sound-absorbing tweed. The hope is, not surprisingly, that The Elbphilharmonie will become one of the world’s great concert halls.That would place it in a stellar list that generally includes Musikverein, Vienna; Symphony Hall, Boston; Concertgebouw, Amsterdam; Opera City Concert Hall, Tokyo; the Philharmonie de Paris; and the Culture and Congress Centre, Lucerne.Many would add the Berliner Philharmonie; the Sibelius Hall, in Finland’s Lahti; Bridgewater Hall, Manchester; and St David’s Hall, Cardiff.The list might not include the Sydney Opera House, the acoustics of which have been described as anything from awful to average. Actor John Malkovich, who performed the panned Giacomo Variations there as part of the 2011 Sydney Festival, told the Daily Telegraph “ … It certainly has acoustics that would do an aeroplane hangar a disservice. For a catholicity of reasons, it’s not the wisest place to put on anything … with the possible exception of maybe a circus.”Not all veteran concert aficionados agree. Sydney medical researcher Dr Bill Brooks, who has travelled the world for music, says: “The Concert Hall has been the venue for several of the most emotionally cataclysmic experiences of my concert-going life.” Among them a Stephen Hall production of Aida; a Sydney Symphony Orchestra (SSO) production of Berlioz’s Requiem, and the concert performance of Götterdämmerung by the SSO at Sydney’s Olympic Arts Festival. 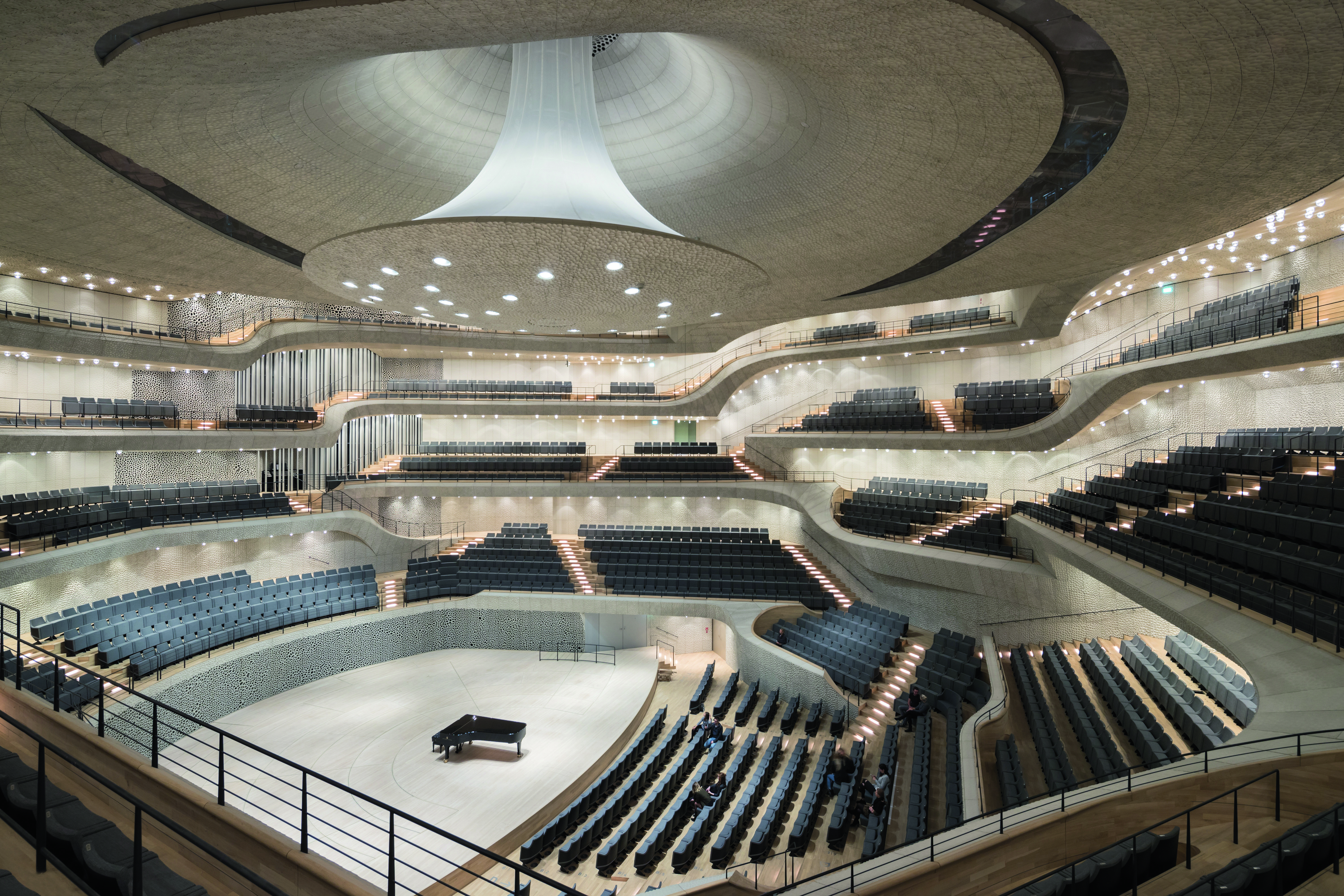 The NSW Government has committed $202m towards a Sydney Opera House “decade of renewal”. One of six key projects is a new acoustic ceiling for the Concert Hall, which will be, building director Ian Cashen told The Weekend AustralianMagazine last year, “like lifting a Perspex box off the orchestra”. The stage will be lower, the walls beneath the boxes will tilt differently and new acoustic reflectors will replace the original plastic ‘doughnuts’. Work begins in 2019, after much testing, and is scheduled to be completed in 2021. But judging concert halls is all very subjective. A significant part of the concert experience comes from the approach, the foyer and the interior of the hall, as well as the music and its acoustics. Australian mezzo soprano Deborah Humble, who recently returned to her home city of Sydney after 12 years living and performing in Hamburg (she has yet to perform at the Elphie), told Robb Report: “The best hall I ever sang in was in the unlikely city of Birmingham. I did Wagner’s Parsifal with the City of Birmingham Symphony Orchestra. I had never been there before and had no particular expectation.

Therefore I got quite a shock to see the impressive inside of the hall and experience the amazing acoustics.”Also receiving a big tick from Humble are the Boston Symphony Hall, the Concertgebouw, the Sage in Newcastle, England, and Saffron Hall near Cambridge.A good hall will help with resonance, she says. “Resonating ability is what helps the human voice get over a huge orchestra. It can be pretty daunting to walk out on stage and see a mammoth group of instrumentalists you know you have to be heard over.”

Hamburg is a city with a rich musical past. The Composers Quarter on Peterstrasse honours classical musicians who were born or worked in Hamburg, among them C. P. E. Bach, Johannes Brahms, Gustav Mahler and the baroque composer Georg Philipp Telemann. The naughty Reeperbahn was where The Beatles readied themselves for lift-off in the early ’60s. Already Hamburg’s many festivals – among them Reeperbahnfestival, Elbjazz, and the Theater der Welt – are including the Elbphilharmonie in their programs. The Elbphilharmonie marks not just a new chapter in the city’s music life, but its lifestyle. It sits on the western point of the new HafenCity, Europe’s largest inner-city urban development project. HafenCity represents the way forward, with The Elphie its futuristic heartbeat.