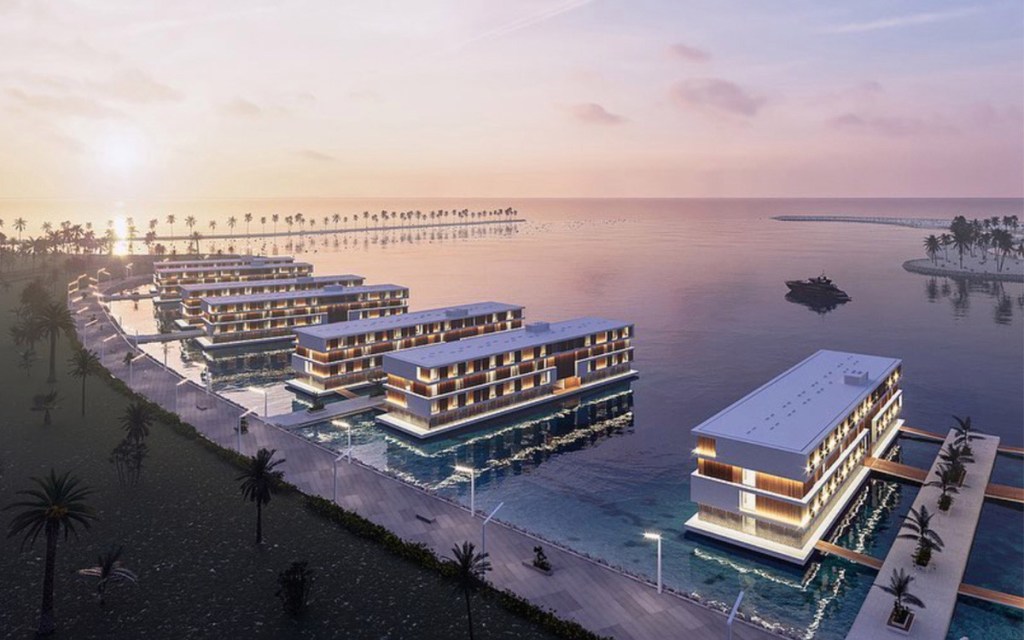 Among the latticework high-rises and towering skyscrapers that make Qatar’s skyline look like something out of a sci-fi movie are now a number of construction sites, all busily working to prepare the country for the 2022 FIFA World Cup, when 80,000 or so football fans are expected to descend upon Doha. But while striking new structures like the Lusail Iconic Stadium may be getting all the attention, what the country really needs in advance of the tournament are hotel accommodations; according to a late-2019 survey, Qatar had just over 27,000 available rooms (the majority of which are five-star.) There’s a push underway to up that to 90,000 rooms by 2022—and to help meet that goal, ADMARES Construction and Qetaifan Projects are embarking on an ambitious project to launch 16 luxury floating hotels designed just for the games.

Each floating structure will have a restaurant and lounge Courtesy ADMARES

In planning the project—which will house a total of 1,616 rooms—ADMARES CEO, Mikael Hedberg, notes that the company “wanted to maximise the assigned location without making it too crowded, allowing guests to travel with ease to the games and (also) have a visually appealing place to retreat.” Located on Qetaifan Island North, a 15-minute ride to Lusail Stadium, each of the 16 sleek and modern four-story hotels will have a different exterior theme and a design that will separate each story of the floating buildings. ”On the ground floor, there will be an architectural element of typical Arabic residences called mashrabiya, which is a perforated steel sheet façade linking the buildings to local tradition,” says SIGGE Architects Partner and hotel designer, Jani Vahala.

Inside, each structure will have a restaurant, a lounge/bar and 101 guest rooms decorated in a clean, Scandinavian style, with shades of white and wood tones. “One unique feature in each room will be the measurement of energy consumption,” explains Vahala. “The occupant’s energy use will be measured and shared directly with them to empower them to cut back on their carbon footprint.” Following the World Cup, there are plans for the floating real estate to be relocated to a permanent location, though no details have been announced. The hotels also don’t have an official name yet—though the developers note that interested guests will be able to book the unique rooms one year out from the games, via global travel sites like Expedia and Booking.com.