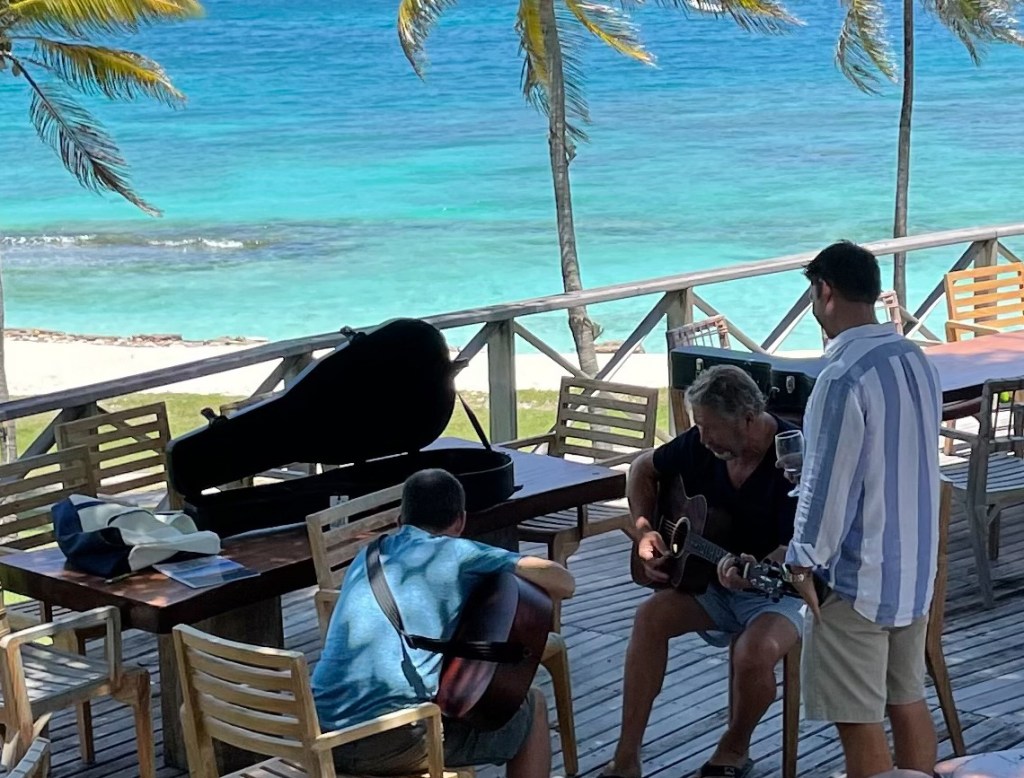 A 115-acre hunk of verdant, gently rolling hills surrounded by the crystalline waters, an hour’s light aircraft ride south-west of Barbados, Petit St Vincent has not had its natural beauty sullied by fussy over-grooming. Expect the requisite Caribbean fundamentals – wind-ruffled palm trees sprouting from coral-sand beaches, turquoise stretches of water dotted with brilliant-white vessels – but forget White House-lawn-immaculate stretches of grass dissected by neat ribbons of Tarmac. Slightly dishevelled elegance rules the roost here. Those taking a bike on a two-mile circuit of the five-star private island resort, in fact, will pass rugged patches of terrain as well as thatched gazebos and pristine tennis courts, and doff their sun hats to listless, cud-chewing bovines as well as honeymooning celebs.

Big on digital detoxing – Wi-Fi is only available in the main reception, and there are no TVs in the 22 Arne Hasselqvist-designed cottages scattered over the island’s hillsides, cliffs and beaches – the resort’s folksy attitude to its guests is neatly epitomised by the wholesomely archaic flag system. While a red flag hiked aloft outside a villa means “do not disturb”, a raised yellow one alerts staff to a request from the occupant, which they’ll find in a sea-bleached timber tube nailed to the flagpole. A bell will ring when your thy will – a picnic and chilled Champers, perhaps – has been done.

On the ever-more crucial sustainability front, the resort has an impressive coral restoration project underway. Petit St Vincent also eschews single-use plastic in favour of biodegradable corn drinking straws and takeaway containers, and offers reusable drinking flasks as welcome gifts. It has installed mineralsing water dispensers in the cottages, supplied by a reverse osmosis water making plant, as well as a waste-water treatment plant used for irrigation. Staff can often be seen darting to the beach to drag turtle nests and eggs further inland, away from danger, and have made a note of the nesting dates to that end.

Add to all this plenty of enticing tropical woodlandl; one of only two Jean-Michel Cousteau dive centres worldwide; a tranquil spa replete with Balinese know-how; a walk-in wine cellar housing over 6,000 wines; globe-spanning sommelier experiences; little touches in the villas such as a hammock and a jar of freshly-baked cookies; plus superb global (with a Caribbean influence) cuisine, and Petit St Vincent is surely one of the most congenial, restorative slices of barefoot luxury on the planet.

One of Petit St Vincent’s more deserted stretches of coastline

Visit during one of Australian guitar guru Justin Sandercoe’s week-long Unplugged Workshops, though, and you will encounter another element to the whole experience: the sound, emanating gently down to the beach from a Gazebo-like structure at the summit of the resort’s reception/restaurant area, of 10 to 15 adult students improvising recognisable pop and rock classics. Think Christian campfire vibe, but with Kumbaya replaced by Come Together.

The Covid pandemic has seriously bolstered humanity’s zest for bolstering our own skill sets. Three in five UK adults invested time and money in self-improvement initiatives during the first lockdown period (three quarters among millennials and Gen-Z), whilst Brits spent over 1.3 million hours learning new skills in the first year of the pandemic era, a 153 per cent increase compared to the previous year, according to LinkedIn research. Meanwhile, a plethora of studies have correlated adults playing an instrument, particularly in a group context, to lower blood pressure and stress levels, decreased heart rate plus a reduction in depression and anxiety. Guitar workshops in sunny, sybaritic surrounds with like-minded people are, to put it mildly, a timely enterprise.

The lessons conducted by Sandercoe – whose online followers now number more than one-and-a-half million, and who has received accolades from the likes of Mark Knopfler and Brian May – include 15 hours of guitar instruction in all, with two half-hour private one-to-one lessons also in the mix. Participants will get to focus on the finer nuances of their technique, although the learning and performing of full songs takes precedence over theory. Hardened enthusiasts will also get extracurricular advice from Sandercoe (think equipment purchases, pedal geekery as well as fretboard and string technique) during group lunches and dinners over the week.

Whilst you’ll get more out of the workshops if you have a basic knowledge of popular music of the last few decades, participants needn’t worry if their ability with an axe doesn’t extend far beyond tennis racquet-strumming stage: playing level in group sessions is very mixed. “Learning music is a linear concept, so if you have differing levels, the person who’s further downstream is still going to benefit from the cerebral aspects of the more advanced teachings,” Sandercoe explains. “And, advanced players can actually learn a lot by restricting themselves to beginner’s stuff sometimes.”

Further to that, there’s time, between jams and lecture-style sessions, for one-to-one attention during which Sandercoe will determine whether each individual should focus on strumming, improvisation, phrasing, complex melodic patterns or playing a scale up and down different parts of the instrument. And, crucially, whilst even a man of Sandercoe’s talents can’t turn self-taught middle-aged journalists with an embarrassment of bad playing habits into fretboard wizards over just seven days, he’s a master at teaching you how to improve further – much, much further – once you reach home. You’ll become a more proficient auto-didact.

You’ll also become regenerated by the osmotically nerve-calming effects of a Caribbean gem where all you’re plugged into is your own mojo.

Now booking for 16th July–23rd July 2022 (around £6,500 for seven nights based on two people sharing). Visit petitstvincent.com or justinguitar.com for more details.

With special thanks to Journey Instruments (journeyinstruments.com) and D’Addario (daddario.com)

More skills-bolstering jaunts around the world…

If the word “retreat” makes you think of the smell of patchouli and the sound of dolphin music, think again – cultural disciplines have now staked a significant claim on the self-improvement holiday landscape. Having arranged bespoke film-making, acting and language-learning holidays in the past, lifestyle concierge outfit Ten Lifestyle Group https://tenlifestylegroup.com/ now offers art holidays on Borgo Pignano, a 750-acre rural estate in Tuscany. are another a stand-out option. Its art studio overlooks the Tuscan hills, whilst its gallery is situated in a beautifully restored historic farm building.
From around £270 per night, plus £40 for 2 hours of art classes (borgopignano.com)

Those who live by the pen rather than the brush can indulge their creative yen here in the UK: at The Hurst, Shropshire, to be exact – a 19th century building, once home to playwright John Osborne, surrounded by forest-covered Shropshire Hills. Participants in creative writing charity Arvon’s fiction course – fronted by novelists Alison MacLeod, Conor O’callaghan and Tim Pears – will, in the organiser’s words, help attendees make “a fairly raw draft of fiction spring into vivid life”, as well as “create three-dimensional characters while sustaining the momentum that makes a story ‘go’”.
21st-Saturday February 26th, £850 (arvon.org)

The Salt of Palmar – an eco-hotel, flanked by a white-sand on the island’s east coast, with gorgeously brash interiors by French artist Camille Walala – has a passion for enlightening guests about authentic Mauritian traditions. Hence, this programme allows visitors with a “when-in-Rome” attitude towards holidays to immerse themselves in the island’s culture by exchanging a skill of their own with that of a local (Mauritian cooking or fishing, to name just two).
Around £485 per night (scottdunn.com)

Part of “Field Trip”, a curriculum of educational experiences launched by travel pioneers Black Tomato late last year, this programme (part of a larger Highlights of Cuba trip) sees participants planted firmly into the director’s chair – although, with the help of the Escuela Internacional de Cine y TV, Cuba’s foremost institute for the cinematic arts, they’ll also learn plenty pf theory, from equipment and technology to makeup and set dressing via sound production.
December-May, from £4,150 per person based on two travelling, excluding international flights (blacktomato.com)

The andBeyond Phinda Impact Journey is a privately guided, seven-day small group experience around KwaZulu-Natal, South Africa. Expect, alongside traditional game drives, exposure to authentic and exclusive community and conservation experiences (based on a genuine ranger training curriculum), as well as gaining insight into Zulu culture, before retiring to Phinda Zuka Lodge: a sole-use accomodatoin in the southern reaches of the Phinda Private Game Reserve, which offers its own private vehicle and guide, butler and chef.
Around £7,400 per person for six nights (andBeyond.com)

Traversing The Wilderness In Alaska

Another one from Black Tomato’s 64-strong “Field Trip” collection, this nine-night sojourn across America’s most brutally cold frontier involves heli-hiking through Boreal forests, scrambling across glaciers and stewarding dog sleds through the blanched wilderness alongside an Iditarod champion. Adrenaline-flooded an experience as it promises to be, calling it a “survival” trip is pushing it – there are isolated luxury lodges along the way – but you’re advised to take excellent hiking boots and tune in avidly when they tell you how to use crampons correctly.

Its Viking explorers reached America around half a millennium before Columbus. Despite a population of just 330,000 – slightly more than Coventry’s – it has its own National Opera and Symphony Orchestra, a world-class culinary scene and has produced globally renowned recording artists including Björk and Sigur Rós. It achieved miraculous economic recovery in the wake of the 2008 financial crisis. Iceland punches well, well above its weight: and this offering (this time from Black Tomato’s “Bring It Back” arsenal of experiences) entails rarefied jaunts with the local luminaries who typify the country’s entrepreneurial vim.

Participants will share wisdom with said luminaries at the famous retreat at the Blue Lagoon, excavated tunnels beneath the Langjökull glacier, the magma chamber of the dormant Thrihnukagigur volcano and the Lava Centre – a hi-tech facility (see picture above) set up in the aftermath of the 2010 eruption of the Eyjafjallajökull  volcano, which showcases the reasons behind Iceland’s transformation of adversity into opportunity.

Milaidhoo Maldives, which opened just before the pandemic, is now collaborating with astronomer Valerie Stimac to create a retreat series entitled ‘Milkyway From The Maldives’ (more on which at a later date on this site).

Wayfinding, astrophotography sessions and sailing by the stars on a traditional Maldivian Dhoni (you won’t be navigating back alone) are all in the mix, while night-sky mythology sessions focus on the history of the nocturnal sky, as in interpreted by various cultures in the Maldives, as well as Tamil, Sinhalese and India.

If what lies beneath intrigues you as much as the extra-terrestrial, the UNESCO biosphere reserve is on the resort’s doorstep: hence the employment of a resident marine biologist to offer experiences in the deep for guests.
POA (scottdunn.com)