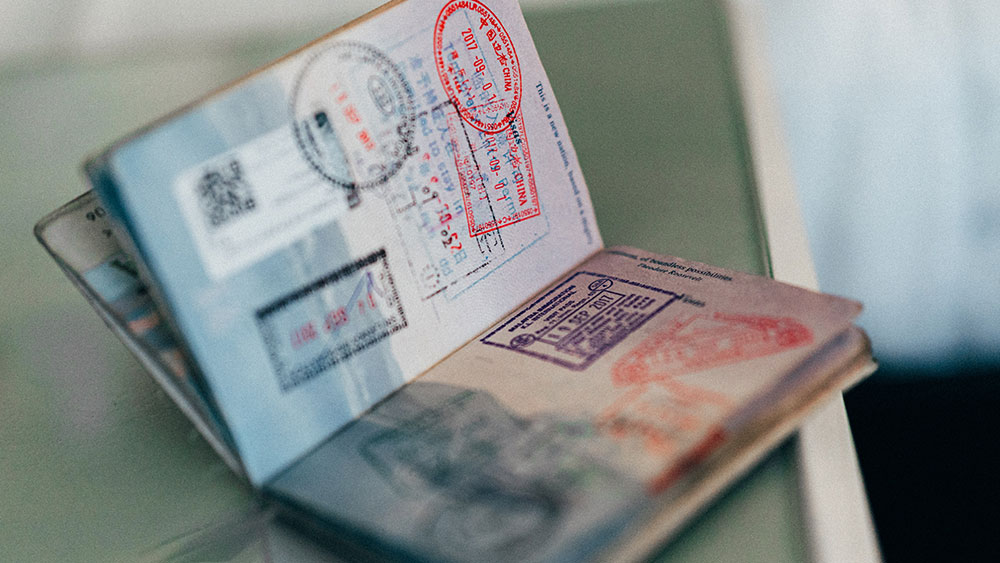 It’s one of Kate Fletcher’s most prized travel souvenirs. The 27-year old Australian, who’s been documenting her life as she works her way around the world for the last seven years, loved the weeks she spent in Tonga—a memory made all the more precious by the recent devastating earthquake and tsunami. She had picked up a job crewing on a sailboat working its way through the island cluster; the captain was determined to take it to Niuatoputapu, a tiny 700-person island closer to Samoa than the island nation’s capital. Fletcher recalls it as a “slice of paradise” where the crew spent a week, meeting locals and even attending the high school graduation. The hiccup came when they had to leave: They needed an exit stamp in their passports but the small building that acted as immigration office was shut.

“A local saw us and she took it upon herself to drive us to find the immigration official,” Fletcher recalls, “Our newfound friend immediately told us not to worry, she had a friend who knew where the immigration lady’s parents lived.” The hunt proved a little more involved than expected, and several hours later, Fletcher and her fellow crew finally tracked down a woman whose stamp they needed for a legal exit. “I found it quite hilarious that after all of that she simply used a regular date stamp that you could buy in a $2 store and wrote in pen DEPARTED,” she laughs now,. “To this day the stamp is my favourite stamp in my current passport and I certainly don’t want to lose it.”

She isn’t alone. Most seasoned travellers will relate to her sentimental attachment—think standing in overlong immigration lines and flicking nostalgically through the inky pages of a well-thumbed passport. Is there any greater thrill than having pages added to a stamp-packed passport? Or filling one up before it runs out? “They don’t do it anymore, but when your passport ran out, they used to stick another one onto it to extend it,” recalls Jules Maury, of elite travel specialist Scott Dunn Private. That was the ultimate globetrotter’s brag, she says.  “When you had two passports stuck together? That showed you were one of the world’s great travellers.”

Passports as we understand them were developed via the French Revolution, according to collector and historian Tom Topol; stamps (officially known as ‘endorsements’) were part of the process from the outset. ” People back then required permission to leave a country rather than to enter another country. The newly founded National Assembly wanted to block the enemy—the noble society—from leaving the country,” he tells Robb Report, “Instead, they wanted to see them beheaded.”

Some countries, like the duchy-filled precursor to modern Germany, required stamps when travellers passed between different fiefdoms, Topol adds.  And even though such analog devices could easily be retired now, in an era of social media they’ve taken on even greater appeal—and reach.And there’s a raft of hard-to-get endorsements that any devoted traveler should add to their jet-setting checklist, according to Scott Dunn Private’s Jules Maury, who’s collected most of them herself first-hand. They fall into two categories: hard to reach, or easy to overlook.

In the former category, she notes, are those from destinations like Tristan da Cunha, the British Overseas Territory; without its own air strip, the only way to snare this stamp is via a five-day boat ride from South Africa. The Cook Islands in the Pacific Ocean offer an unremarkable inking at Avarua, the capital; better to head to Atutaki which is known as One Foot Island thanks to its footprint-shaped passport stamp. Easter Island’s Moai-depicting stamp is visually arresting, but it’s also hard to get: travellers collect it not at immigration but rather at the local post office, per Maury—which is only open for limited hours.

Antarctica, of course, is not a country, but many of the operators, like White Desert, have created their own versions of immigration endorsements so that travellers can commemorate their visit. Maury has one stamp yet to secure which she’s keen to bank: that of Akhzivland in the Middle East. This tiny country was founded by Eli Avivi in 1971. “There are two residents, who live on 2.5 acres, which you can pass through between Israel and Lebanon.”

The second category, easy-to-overlook stamps, are mostly ones which aren’t issued by official governments. “Bucket-list, or far-flung destinations, often offer them,” Maury continues—see Machu Picchu, for instance, with its “passport office” at the Citadel Entrance, or the UN HQ in NYC, which offers a commemorative stamp to mark the date of someone’s visit. Checkpoint Charlie, the decommissioned dividing line between East and West Berlin, is commemorated in a museum there; bring a passport on any visit and staffers will ink the Soviet-era stamp as a souvenir. Note, though, that these so-called novelty stamps are frowned-upon by the State Department, and can be considered graffiti of a government-issued document; damaged passports, of course, are invalid.

More crave-worthy, and government-approved, are the stamps from destinations served mostly, if not entirely, by private jet; think of elite islands in the Caribbean like Canouan or Mustique, for example, with three-letter codes that only the passports of the wealthiest will bear (CIW and MQS, respectively). The ultimate stamping statement, though, comes from landing stateside, when ad hoc immigration is created solely for those passengers. “When arriving at an airport that has no customs, a private jet operator can arrange for customs officials to be present to clear that incoming flight,” says David Gitman of Fort Lauderdale, FL-based charter firm Monarch Air Group, “Notice well in advance is required, but it’s doable.”

Perhaps the most exclusive, though, isn’t one stamp but a matching set—those of the Caribbean Netherlands. It’s easiest to collect that complementary trio when chartering a private yacht to shuttle between them. Each time the boat casts off, passengers will leave with a new stamp: a flamingo (Bonaire), a star (St Eustatius) and a palm tree (Saba).