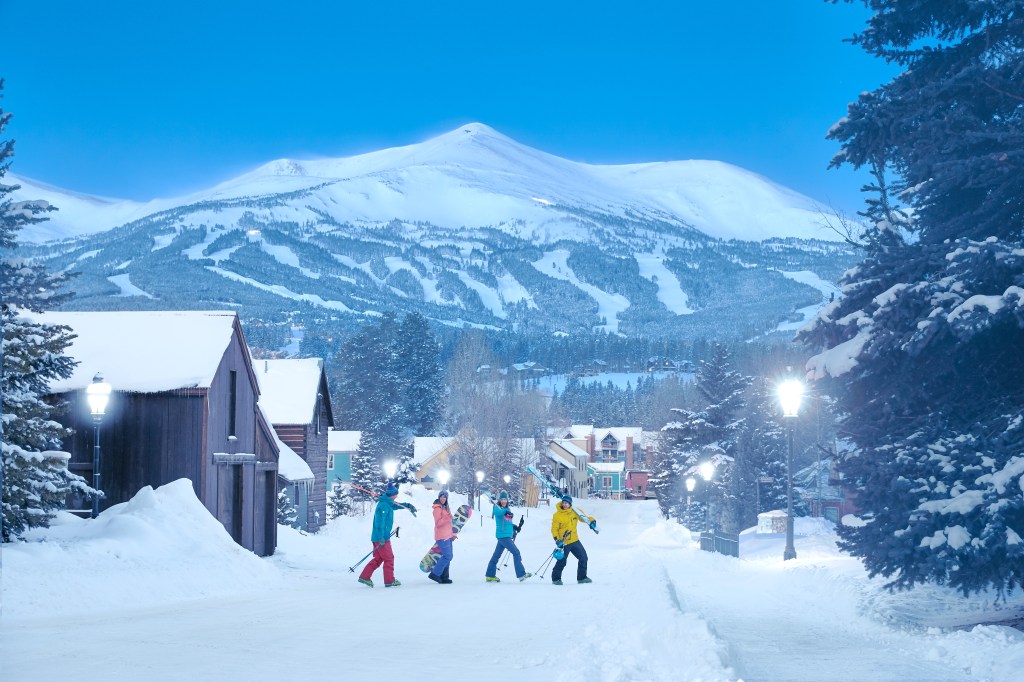 Until being informed that Colorado has had its most snow in 28 years, I’d been weighing up where to ski this year. For the past decade or more, I’ve made a habit of hopping on a quick flight for a reliable dose of Alpine goodness, but this season, the slopes of the Centennial State had been a’hollering (avoiding another evening in MooserWirt might also have been a factor). News of this dump was the decider.

The trouble is, Colorado boasts (and quite rightly so) 28 of the world’s finest ski resorts. So where best to find this hallowed pow pow? Historically, Aspen is as much about posturing and popping bottles as it is sniffing out the powder; Steamboat’s snow is such that it’s affectionately known as Champagne Powder™ (across the border in Utah, Park City has Hero Powder); Wolf Creek famously gets the most (an annual average of 430 inches), while Powderhorn probably speaks for itself. You can’t really go wrong.

These near endless options made Vail Resorts’ Epic Pass a timely discovery. Vail Resorts grants access to 67 mountain resorts throughout eight countries, including as of 2016, Whistler, and fortuitously for yours truly, a handful of Colorado’s best. The Epic Pass lets you ski them all.

And so it was decided that Breckenridge would be a good starting point, on account of, among other things, it being home to the Imperial Empress, the highest chairlift in North America. Other draws include its five huge skiable peaks, its unrivalled freeway terrain parks, its wealth of ski-in ski-out properties, more ‘Whoa there…’ double black runs than you can shake a ski pole at and trees – lots of trees: perhaps the only thing the Alps really lacks for a skier. The backcountry’s not bad either.

Getting there from Denver takes an hour-and-a-half by car in good weather – the same goes for a dozen other resorts – only visiting Breckenridge, a 19th century mining town is like stepping back into the Wild West, albeit a particularly cosmopolitan enclave of it. The town’s historic Main Street was built in 1880 and still bares the same colourful saloons, shops and brothels as it did back in the days of its prodigal son, the infamous outlaw Pug Ryan – even if they have been largely repurposed.

Briar Rose Chophouse & Saloon is one such former brothel (connected to the church opposite by an underground tunnel) that now purveys the best steak in town. Alongside establishments such as the raucous Gold Pan Saloon, one of the first to earn a liquor license in the US, and the charming Breckenridge Distillery, the highest of its kind in the world; the town offers countless watering holes, and at an altitude of almost 3,000m, where alcohol hits you twice as quickly, it’s fair to say Breck’s après ski can get pretty lively.

But it’s not all downhill and downing shots. This year, Britain took bronze at the International Snow Sculpture Championships held in Breckenridge Arts District, a hub of studios, galleries and performance spaces – the likes of which you’re unlikely to find in Europe. International artists exhibit regularly around town, and all manner of workshops – from glassblowing to candle making – are held daily for children and adults alike.

I digress. Back on the slopes, finding a new line through the trees on Peak 10’sThe Burn, or getting first tracks on 4th July Bowl (it’s often skiable that late in the year), is as much fun as as you’re likely to have on two feet. The snow is consistently magnificent, and every day – or at least 300 out of a year – is a Bluebird. Yet skiing just one resort, with so many others on your doorstep, is like eating Rocky mountain oysters every night at the hotel restaurant.

Which is why it’s worth using the Epic Pass to visit another of Vail’s nearby resorts. We opted to end the week in Crested Butte on account of its non-existent weekend lift queues (Breck’s can sometimes take longer than an hour), its moniker ‘The last great ski town’, and that the journey from Breckenridge is worth the trip in its own right. It’s also Vail’s most recent acquisition – one that didn’t initially go down too well with the locals.

Lack of lift queues: another of the region’s major draws. Photo by Trent Bona

Now, the journey itself should take just over three hours, snaking through postcard-perfect peaks and plateaus (South Park, as in the cartoon, is also on the way), but it’s well worth stopping at one or two choice landmarks en route. A minor detour at the graciously named town of Fairplay will take you to the Black Canyon of the Gunnison National Park: a moodier, guardrail-free version of its Arizonian grandparent. Standing atop a 2,250 cliff is more terrifying than most of Colorado’s double blacks, but it’s admittedly not everyone’s cuppa.

Next, any town called Buena Vista shouldn’t need much selling but its latest arrival, Surf Hotel & Chateau, is expected to raise its profile in the destination stakes. Here, at 2,428m, rafters, kayakers and surfers queue up to tackle the white water of the Arkansas River, more or less all year round, and the hotel will no doubt become their exquisitely designed base.

Moving on, the region is awash with hot springs, some decidedly more worthy of a visit than others. Mount Princeton Hot Springs Resort is conveniently on the way. There’s something eerily ‘Twin Peaks’ about the place, but, the water’s bliss and the setting’s something else – stopping for a dip is recommended.

And then into Crested Butte, another quaint mining town, this one with a quiet confidence about it, and what many an erudite skier considers to be the best backcountry in Colorado. Vail plans to invest carefully and sympathetically in the resort, because while there are certain areas that could perhaps do with modernising (starting with its accommodation), part of Crested Butte’s understated charm is that it’s not all bells and whistles, that it is quiet, and for that very reason, fondly regarded by those in the know.

It’s rare to be the first down piste after piste of untouched snow, so experiencing that on two consecutive days in Crested Butte has set a new precedent for future trips. Less of the Courchevels and the Zermatts; more of the pistes less groomed – the small resorts with the deep snow and the quick lifts. More exploring, and more road trips. More of the Epic Pass!

An Epic Day Pass, offering a discount of up to 50 percent on lift ticket window prices, starts at $106 for one day of skiing at any of the Company’s North American resorts. Book your transfer from Denver International Airport with Epic Mountain Express from $85. Discover the best spots on the mountain including the steepest chutes and secret powder stashes with Breck Guides ($299). Luxury accommodation at The Ski Hill Place starts at $399 a night.