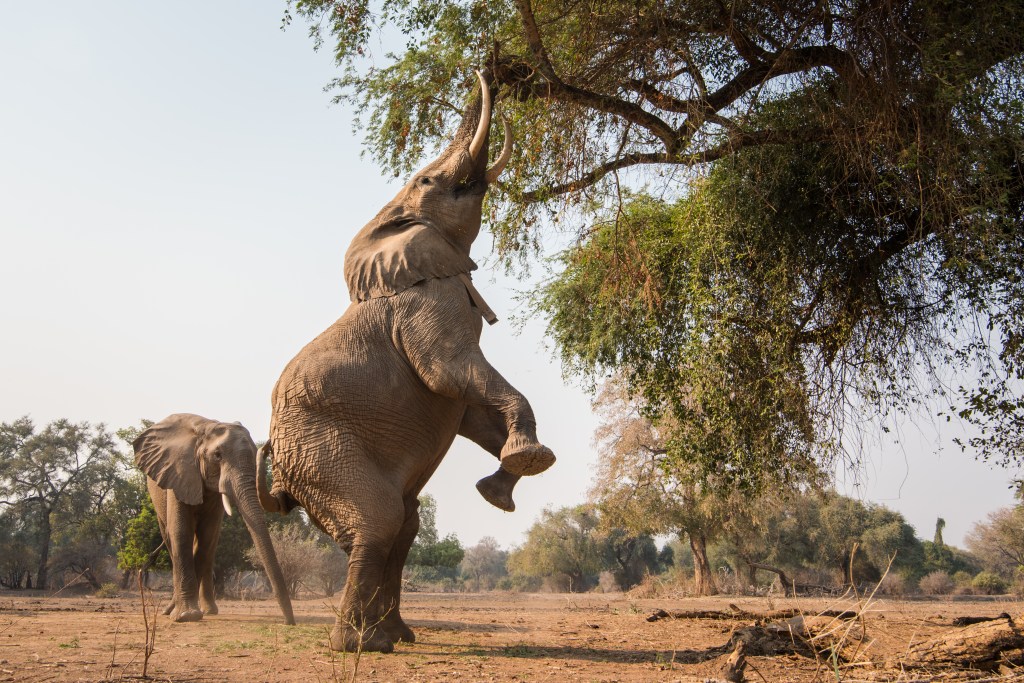 Elephants – which are still timid from a period before various ivory trade prohibitions across the world, but are becoming gradually more comfortable near humans – kill trees by scraping off their nectary bark with their tusks, then replenish them by dispensing, fertilised, the seeds from the delicious pods they consumed, stood up on their hind legs to reach them, only the previous day. It’s just one example of a habitat in which depletion and rejuvenation do constant battle.

While cheetahs can often be seen curled up on branches at dusk, and three lions stalk the camp’s surroundings, big cats remain elusive to us over two days of safari. That said, the throaty, baritone roars heard during evenings by the camp fire, along with paw prints on the sand-dusted decking – spotted one morning within a few metres of where this writer slept off a modest dose of heat stroke and moderate dose of Zambezi beer – meant that all present welcomed armed escorts taking guests back to their quarters.

There’s more – far more – to do here than conventional open-jeep safaris. Take a visit to Chikwenya Island on the camp’s flat-bottomed boat, weaving around the pods of hippos hungrily eyeing your fellow invaders, and you’ll find a laid-out barbecued feast featuring the same kind of wonderful fare you get back at camp – seared duck, other gently charred meats, noodle salads, local curries, ginger ice cream and panna cotta desserts – waiting for you at the other end.

Another splendid afternoon out involves stepping aboard that same wonderfully rickety watercraft, this time weighed down with an esky or four of refreshments, for an afternoon catching tiger fish and bream. The guides may even take you to see the unlikely sarcophagus of the tribal chief after whom the camp is named: the hollowed-out base of a vast, 1200-year-old baobab tree.

Serious safari buffs often, having travelled such a distance to a part of the world with such a diversity of wildlife and living environments, take in two or three places in the same corner of the continent. So it’s well worth mentioning that Wilderness Safaris has two other new camps, too. Around the same time that the Chikwenya Camp staff were polishing their elephant guns and welcoming their first guests, those at Serra Cafema – a 100 per cent solar-powered joint venture between Wilderness Adventures, the Marienfluss Conservancy and local Himba villages on the banks of the Kunene River in the Hartmann’s Valley in Namibia’s extreme north-west – were doing the same. And, in May, the Magashi camp, overlooking Lake Rwanyakazinga in Rwanda, will greet its first visitors, whose savannah experiences will be rooted in the venture’s core aim: to help conserve Rwanda’s last protected savannah ecosystem, including dwindling inhabitants such as the shoebill and the black rhino.

The coupling of remote, rarefied adventures with conscientious luxury is clearly hitting the spot in an ever-chancing luxury safari market.

Chikwenya is open between April and mid to late November. Accommodation costs around £980 per night, including all meals, twice daily camp activities, laundry and all drinks. wilderness-safaris.com

Africa Odyssey (020 8704 1216./Info@africaodyssey.com/https://www.africaodyssey.com) can arrange a trip with Wilderness Safaris (3 nights Chikwenya Camp) from £4,453 per person including internal and international flights from London.