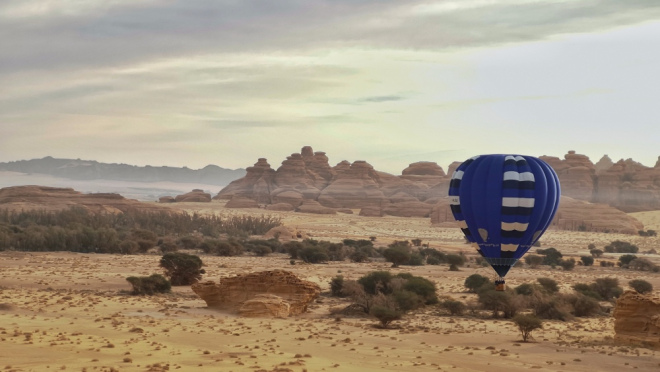 These days festivals are about more than enjoying great music or dining on delectable food. While those elements will certainly continue to serve as the primary attractions, the added bonus of an alluring destination will push travellers to voyage near and far for such gatherings, and Winter at Tantora Festival – which began on December 20 and will run through February 9 – delivers just that. Located in the ancient Al-`Ula Valley, the event will open up one of Saudi Arabia’s hidden gems to visitors. Below, eight reasons why you should go to Winter at Tantora, before the final dates are sold out.

1. The History is Everywhere

Al-`Ula is a place brimming with rich history that dates back to 6th century BC. Serving as a home to ancient civilisations, well-preserved relics, elaborate facades and pre-Arabic inscriptions and petroglyphs can be found throughout the region.

2. You Get to See a UNESCO World Heritage Site

Just outside of the city of Al-`Ula is Al-Hijr, Saudia Arabia’s first UNESCO World Heritage property. It’s the largest conserved site of the Nabataeans south of Petra in Jordan with archaeological remains that date back to the 1st century BC.

3. The Ancient Landscape is Jaw-Dropping

The dramatic landscape is otherworldly, featuring massive sandstone mountains and geomorphological wonders like the Elephant Rock. For those who want to see it from above, the hot air balloon festival from January 31st to February 9th will afford the picture-perfect opportunity. Otherwise, stay planted on the ground and watch as the valley is filled with a rainbow of colours.

Over the past several weeks world-renowned musicians like French violinist Renaud Capuçon and Chinese pianist Lang Lang have taken the stage at the new Maraya concert hall. The 500-person venue is covered entirely with mirrors on two sides, blending in with the environment and reflecting the natural beauty that surrounds it. Inside guests will find a digital exhibition of Vincent van Gogh’s Starry Night paired with a musical arrangement by Luca Longobardi and a theatre equipped with the latest audio and lighting technology. In the coming weeks world-renowned Italian singer-songwriter Andrea Bocelli and Greek composer Yanni will be taking the stage, ending Winter at Tantora on a high note.

The festival will also play host to the Custodian of the Two Holy Mosques Endurance Cup on February 2nd, the second largest horse race in the Middle East with 80 riders competing for one of the largest prize purses in the area.

6. You Can Get Artsy

In addition to the music performances, Winter at Tantora has set up temporary art installations on the festival grounds. Take a stroll through the sculpture trail and meet the artists behind the pieces or get more hands-on with creative workshops and learn about local handicrafts.

Stay in style at Winter Camp Al Wadi, a Bedouin-inspired accommodation with 120 rooms and five expansive villas. Operated by AccorHotels, the property boasts 24-hour room service, spa facilities and on-site dining in the event that you want to stay in Al-`Ula overnight.

8. You Can Taste Authentic Arabic Cuisine

Whether you’re tantalising your senses at the spice and incense souk or grabbing a bite at one of the festival’s many pop-up restaurants, this is the perfect opportunity to get a taste of authentic Arabic cuisine. Agricultural tours are also an option, providing an opportunity to learn about the region’s farming history and where the food comes from.

All photos courtesy of Winter at Tantora