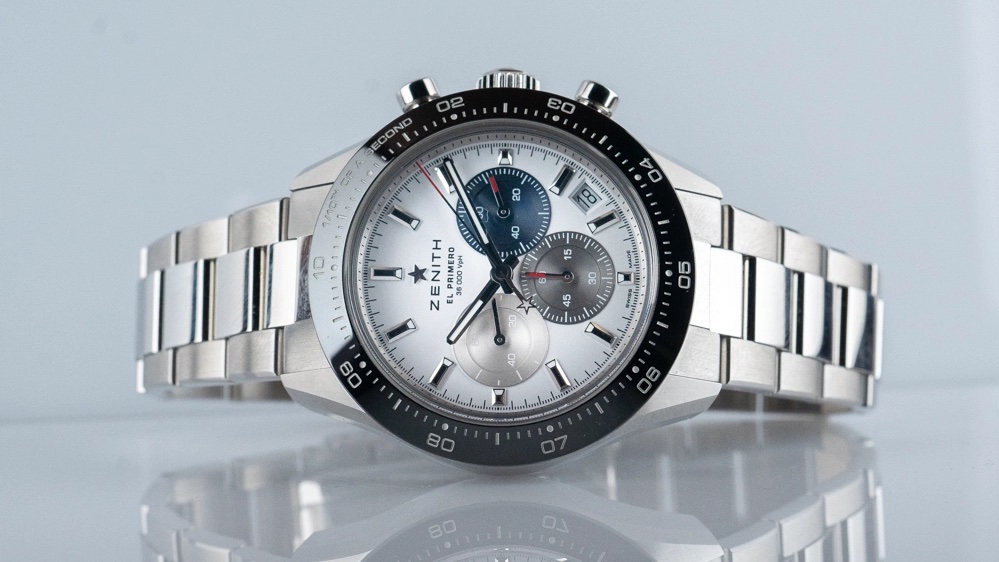 Compared to a normal chronograph, operating the newly revised Zenith Chronomaster Sport’s 1/10th-second stopwatch function is a thrill. That central hand moves multiple times faster than your average chronograph. The sheer speed of that hand is simply more exciting to behold, but it also suggests that whatever is being timed could be an exceptionally close race.

The earliest sub-seconds chronograph appears to be Frenchman Louis Moinet’s 1816 creation which measured down to 1/60th of a second (for astronomical uses). Amazingly, it was nearly a century later that Heuer topped that with a chronograph that could measure 1/100th of a second. But all of this mechanical prowess was afforded the roominess of pocket watch cases. Zenith would go on to be one of the most innovative companies working in the relatively tiny wrist-watch chronograph space, with the El Primero being an enormous leap forward.

The El Primero accomplished so many things in one very small package: a stopwatch function accurate to 1/10th of a second (though that central mounted hand still moved at 60secs/rotation); an instantaneously switching date function; an auto winder, and an independent running seconds hand (on the 9-o’clock sub-dial). This movement was so advanced that Rolex used it in the Daytona for years before developing their own. The Chronomaster Sport is a modern tribute to those early El Primeros, one that celebrates Zenith’s prowess in mechanical chronograph development with some exciting new features. Technically, all El Primeros are 1/10th of a Second Chronographs, because they all have the hashmarks to measure the beats of the movement and both the early El Primero chronograph and the new Chronomaster beat at 36000 vph, but the latter includes an addition to the gear train which allows the central hand to move at six times the speed of a normal chrono hand.

It takes a little while to adjust to everything moving faster on the Chromomaster Sport. Completing its rotation in just 10 seconds, the central stopwatch hand races across the dial at quite a clip. The subdial at 3-o’clock only tallies up one minute before sending that data over to the sub-dial at 6-o’clock which tallies those minutes up to one hour. The running seconds at 9-o’clock is the only familiar function. Another difference, though it is only a superficial element, is the entirely unique engraved bezel stating “1/10th OF A SECOND.” No other watch proclaims this overtly. This announcement is also reinforced across all of the stopwatch functions. However, setting aside the proverbial Kool-Aid of the 1/10th OF A SECOND marketing, it becomes clear that, functionally, this watch is really is all about timing close calls.

On the surface, everything about the new Chronomaster Sport feels sleek and comfortable, while retaining a vintage look. The case is 41mm, but it wears more like a sub-40mm watch. The generous width of the ceramic bezel keeps the dial nice and small, and the overall package feels much more like a vintage El Primero than I had expected. The bracelet is comfortable and, aesthetically, much like those that came on the originals back in 1969. For me personally, the ability of this watch to stay faithful to the original El Primero aesthetic, while still offering a totally unique and modern feature set, is deeply appealing and something akin to a vintage-styled Porsche 911 with a modern suspension and engine.

One glance through the rear caseback window tells you that Zenith is on their A-game. The blued column wheel is especially well-executed and prominent in blued steel. The veracity of claims that column wheel mechanisms are superior to lever actuators has been questioned in the past couple of years, but this one is in exceptional company along with chronographs from the Holy Trinity (Patek, Vacheron Constantin and Audemars Piguet) and a host of other high-end makers including Rolex and Omega. The pushers are crisp and immediate, and that may be reason enough to favor the column-wheel mechanism.

After spending some time with the Chronomaster Sport on my wrist, I texted a few of my horological pals to say that, ‘If I were to be dropping $10,000 on a chronograph, this would likely be it.’ One of those friends, who had also spent some time with the review model, wholeheartedly agreed. In an era when steel Rolex Daytonas are basically unobtainable, Patek Nautilus chronos can reach six-figures, and Omega Speedmaster 321s require getting on the waitlist for an indefinite period of time, the Chronomaster Sport may well be worth your consideration. It has all the heritage, sophistication and good looks of its main competitors, but the mechanics of its 1/10th Second chrono truly sets it apart.