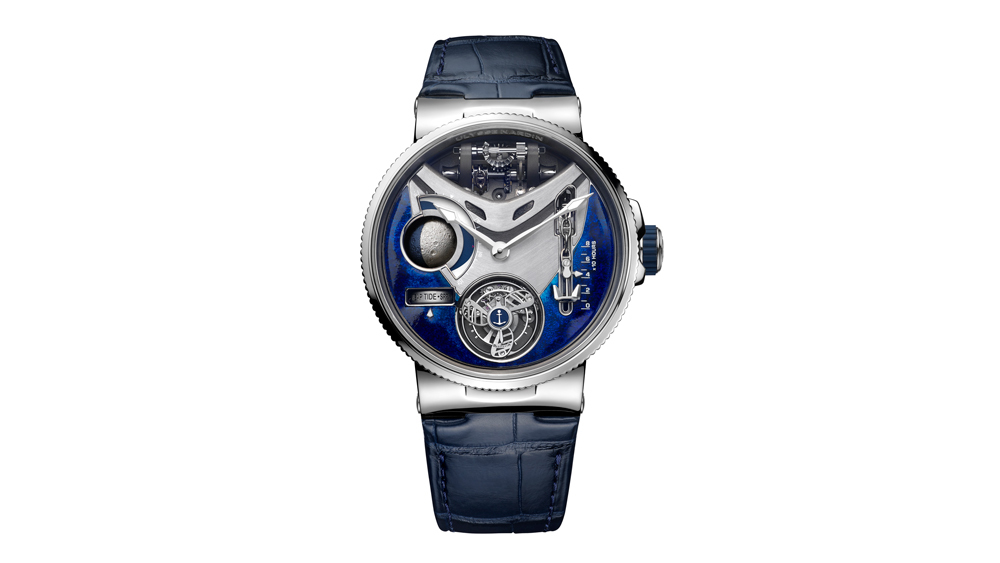 Just ahead of its unveiling at the Miami Yacht Show and Watches & Wonders this weekend, we got wind that Ulysse Nardin is dropping anchor stateside with a new limited-edition, platinum tourbillon timepiece inspired by mega yachts. A follow-up to the Marine Grand Deck Tourbillon launched by Ulysse Nardin in 2016, the new Marine Mega Yacht has a creative new way of representing its various complications. A platinum ship’s bow at 12 o’clock ploughs through a 3-D blue Grand Feu enamel dial as though it were sailing through the Ocean. A patented 80-hour power reserve is indicated by a moving anchor connected to a windlass linked to the winding mechanism, while the flying tourbillon moving at one rotation every 60 seconds is decorated like a ship’s propellor.

The watch also comes equipped with a moonphase with a 3-D representation of the moon’s actual surface with one half of the sphere treated in blue PVD for the period of the new moon and the other rhodiumised to simulate the illuminating effect of the sun. To top it off, the watch has a tide indicator at an aperture at 8 o’clock, which displays the tides in real time according to a specific location.

To create this manually wound mechanical caliber with a slew of yacht-inspired complications, Ulysse Nardin employed its top watchmakers, as well as watchmakers from small independent watchmaker Christophe Claret—known for its creative complications. At the heart of the watch’s “engine” is a 37 mm caliber with 504 components with an 80-hour power reserve beating at 21,600 vibrations per hour. Visible through the caseback, the new UN-631 caliber is modeled to look like the engines in a ship vessel.

There’s a lot to play with in the new 44 mm, platinum Marine Mega Yacht (around £240,500), but only 30 people in the world will get to play captain to the timepiece.

Ulysse Nardin CEO Patrick Purniaux is moving full steam ahead at the revamp of the Swiss watchmaker. After the unveiling of the Marine Mega Yacht at the Miami Yacht Show today, Pruniaux will host a private bash at Miami’s Island Gardens Deep Harbor this evening to celebrate Ulysse Nardin’s new Freak X collection.