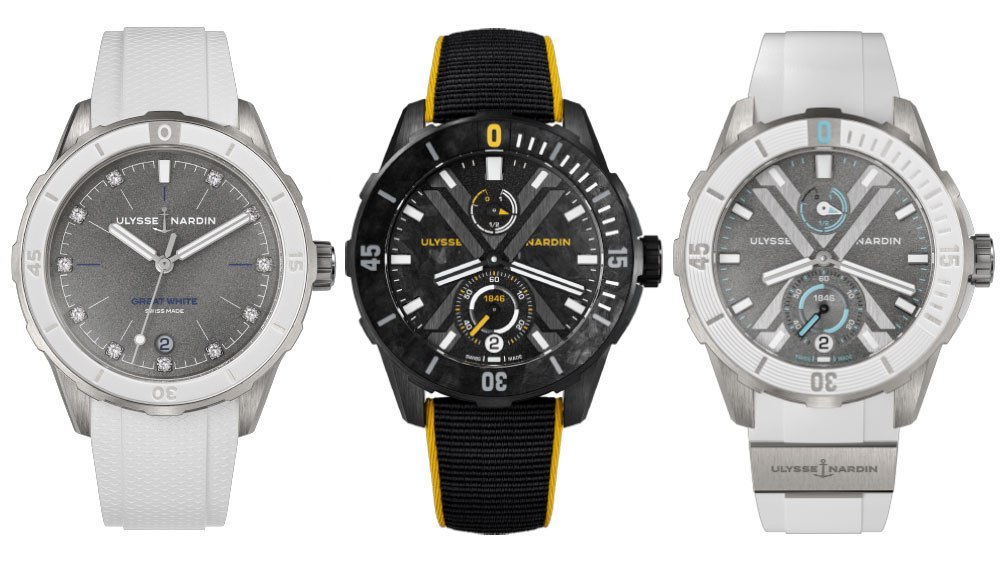 Ulysse Nardin has launched a slew of new dive watches. The brand has been known for its marine chronometers and seafaring instruments since it was founded 173 years ago .But now it is taking its history up a notch. Owned by Kering—the French luxury conglomerate that also owns big name brands like Balenciaga and Gucci—since 2014, Ulysse Nardin hosted a huge dinner in honor of the new watches at the group’s headquarters in Paris last week. Kering-founder and French billionaire François-Henri Pinault was in attendance, suggesting that, five years into the acquisition of Ulysse Nardin, he’s ready to put some wind behind its sails. (He was also reportedly a collector of Ulysse Nardin before Kering purchased the company.)

Now with its charismatic CEO Patrick Pruniaux, a veteran of Tag Heuer and Apple, behind the helm since 2017, the brand is beginning to skew younger and sportier. But Pruniaux insists there is something for everyone at Ulysse Nardin. “The products are not the same, that’s the great thing about Ulysse Nardin,” Pruniaux told Robb Report. “I don’t think there is any product that competes with another. There’s the person that’s going to buy the Marine watch and then there is the person that’s going to buy the Diver X watch, which isn’t a marine watch and it’s nothing like our Freak watch either.” The Marine is decidedly more traditional while the Freak (its most popular model) is all about technical innovation and new ways of telling time, so the Diver X fits somewhere in between the extreme and the traditional.

Nevertheless, Ulysse Nardin fully intends to show that all of its watches have that special X factor. To do so for the new diver collection the brand tapped a group hardcore sports ambassadors—a polar explorer and a free-diver—to put the watches to the test in their respective fields. “They’re all active in sports where there is little or no money,” said Pruniaux. “You could have the world record in free-diving but are you going to make a living out of it? Hardly. I respect that, to be honest. I admire that people still do things just for the sake of it.” Sounds a lot like modern watchmaking.

The release of the new diver collections also coincides with the announcement of Ulysse Nardin’s first sponsorship of the 2020 Vendée Globe—a single-handed, non-stop yacht race around the world. It is arguably the toughest event in sailing, and next year will mark its 30th anniversary.

In homage to the environment that inspired this watch, the new 44 mm Ulysse Nardin Diver X Antarctica (around £6,900) — a men’s watch that is complementary in design to the Lady Diver X below—takes its design cues from the snowy landscape of Earth’s southernmost landscape and applies them to the strap, bezel and hour markers. The dial evokes the craggy andesite and rhyolite hills formed by volcanoes during the Jurassic period, and its aqua-blue accents on the 60-hour-long power reserve indicator at 12 o’clock and the small seconds counter at 6 o’clock mimic the color of Antarctica’s mountainous iceberg formations.

Ulysse Nardin brought on polar explorer and photographer Sebastian Copeland to promote the watch. Coincidentally, his first real expedition to the arctic included plenty of diving at unimaginable temperatures. “I had the opportunity to join a scientific research ice breaker in Antarctica in 2006, and I spent two seasons on that ship, scuba diving and working with researchers and getting more familiarized with the ice,” said Copeland. “The more I got to know it, the deeper I got invested in it. The more I got to see it, the more I realized that the ice was not this inanimate object—it has a life cycle. It’s born, it lives, it travels, it dies. I thought it looked a lot like us—fierce, defiant, fleeting and fragile.”

Copeland uses his photography and expeditions as a platform for raising awareness about climate issues. He just released his third book with TeNeus Arctica: The Vanishing North and will be attempting to complete a failed mission from 2017 to the North Pole, where he and his expedition partner were forced to abort their cause due to extreme weather conditions. “In my estimation, having done quite a number of missions, the North Pole is, by a long-shot, the toughest,” said Copeland. “It’s the pinnacle of difficulty. I’m endeavoring to go back and complete that mission, which I’m certain will be one of the last if not the last attempts at an environment that simply can no longer allow for it.”

While Copeland has had various sponsorships from brands, this marks the first time he will partner with a watch brand and he admits he didn’t know much about watches or Ulysse Nardin before it came to fruition. “They offered to give support to my mission,” says Copeland. “And candidly, I thought the watches were bitchin’.”

Twelve years after the launch of its first dive watch collection for ladies, Ulysse Nardin took the plunge to promote a new line of dive watches for women. The new watches are sporty without being hefty and wear elegantly on the wrist for a watch that can be worn not just in the ocean, but every day. The new model is slimmer than previous versions, but at 39 mm—a size that increasingly appeals to women — it still makes a statement. It comes in three colours: a deep ocean blue dial with touches of rose gold on the seconds hand and Ulysse Nardin’s anchor symbol in a steel case on a navy sailcloth (around £8,400), alligator or rubber strap; a mother-of-pearl dial in steel on a white alligator band (around £8,400); and a DLC black-matte steel dial in a rose gold case on a black textured rubber band, which comes accented with 40 diamonds on the bezel (around £11,500).

A limited-edition version of 300 called the Great White (pictured above, around £6,100) was modelled after a previous men’s version by the same name. The back of the watch is stamped with an image of a female free-diver in support of Ulysse Nardin’s latest female ambassador, Alessia Zecchini. The 27-year-old free-diver began her career when she was just 13 and has since powered her way through the sport to become the world record holder in Constant Weight Apnea diving for reaching a depth of 113-meters (an incredible 370 feet), among many other achievements too long to list. All of the watches in the new diver collection for men and women are water-resistant to 300 meters (984 feet). But while they are well-equipped to handle one of Zecchini’s dives, we don’t recommend a non-professional trying their hand at those depths. Zecchini has already put the Great White to the test and says that it performed perfectly and was easy to read—which says a lot, considering some of her dives are so deep they require she straps on a flashlight to her head to see where she’s going. She also visited Ulysse Nardin’s manufacture to see how the watches were made. “You have to have a lot of patience to work there,” says Zecchini. “It’s really…wow! I didn’t know it was so complicated. It’s unbelievable.”

To herald the upcoming Vendée Globe race, Ulysse Nardin made two dive watches, the Diver X Nemo Point (around £6,900) and the Dive X Cape Horn (around £7,676). Each is named after two of the most challenging areas on the ocean that are often considered a rite of passage for sailors who survive them.

The saffron stitching on the Cape Horn timepiece is a nod to the Spice Route—the trip around Tierra del Fuego, known for its battering seas. The brand says the blue and red stitching on the Nemo Point model was inspired by surfboard straps. Both feature a power reserve indicator (60 hours) at 12 o’clock, a round date window at 6 o’clock, and a forward and backward date corrector. The Cape Horn model comes in a titanium black DLC case with a titanium and carbon black bezel and the Nemo Point comes in a titanium case with a blue rubberised bezel.

The backs of both pieces come stamped with the coordinates of Cape Horn at the route of the Vendée Globe. The race begins next November, starting in the Sables d’Olonne, in the Vendée region of France.