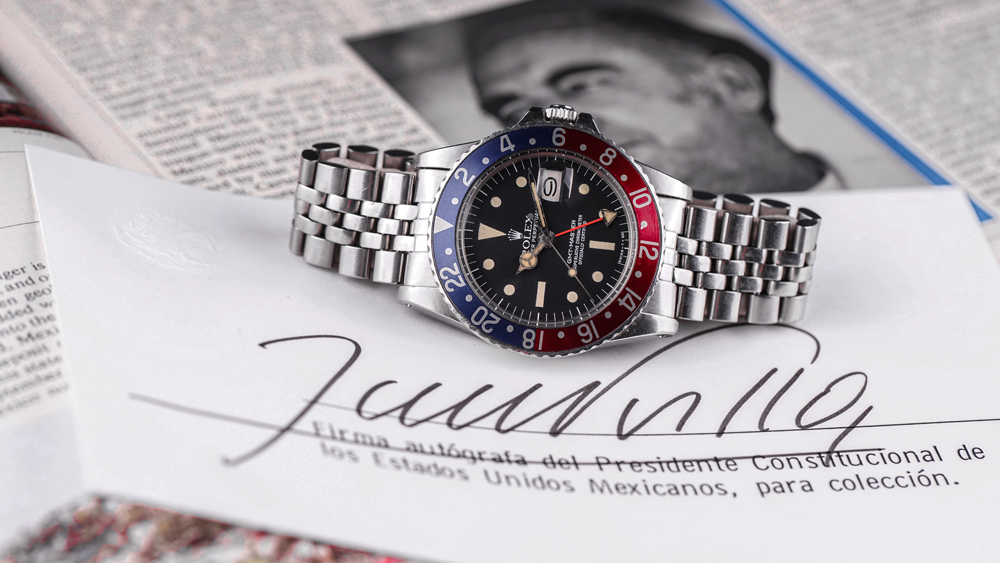 Here’s another East Coast vs. West Coast battle to follow: Two respected vintage watch dealers, West Palm Beach, Florida-based Eric Wind of Wind Vintage and Los Angeles, California-based Cameron Barr of Craft & Tailored have teamed up for a friendly competition. The two collectors are offering a fresh-to-market, early Rolex GMT-Master with serious provenance for around £57,500. “Eric and I are really good friends, so the thing that’s really fun about this is finding these amazing watches, celebrating their history, and also learning more from each other,” says Barr.

The watch once belonged to Mexico’s 51st president, José López Portillo. It flew around the world with him as he shook hands with world leaders from Ronald Reagan and Jimmy Carter to Fidel Castro and Pope John Paul II. Wind and Barr will be splitting the profits—the only caveat is whoever sells it on their site first (windvintage.com or craftandtailored.com) gets treated to dinner. “Typically, when dealers team up together they decide which one is going to be the actual seller, but we thought it would be fun to do something new and see who sells it first for a little competition,” says Wind. In the meantime, Barr is already plotting his filet mignon order.

Either way, they’ll be able to celebrate once the watch gets in the right hands. The timepiece has not only never publicly come to market before, it is also coming directly from Portillo’s family. The back of the watch comes engraved with “LIC José López Portillo.” Licenciado is a Spanish title given to lawyers—before his foray into politics, Portillo cut his teeth as an attorney. For those that didn’t grow up during the Cold War, Portillo was an interesting international player at the time not only acting as a go-between with the United States and Cuba, but also because during his tenure, Mexico invested heavily in its national oil industry after new oil reserves were discovered in the late ’70s. Unfortunately, it later gave way to a debt crisis as international oil prices fell. Mexico would declare sovereign default in Portillo’s final year in office.

“I really love watches with provenance like this one—it’s been an interest of mine since the beginning with watches and particularly, watches from world leaders,” says Wind. “I was very excited when we had the opportunity to purchase this. There has been no discussion online about him owning this watch and there hasn’t been a watch spotting on Instagram or anything else about President Portillo wearing a Rolex GMT, so we found it pretty significant.”

The watch hadn’t been on the radar of much of the watch collecting community despite the fact that Portillo was often photographed wearing it. “We have an amazing press archive of original photos of Portillo wearing the watch, including press in The New York Times, and other publications where he has been photographed during various events wearing the watch,” says Barr. That includes the below photo of Portillo meeting with Fidel Castro in Cozumel, Mexico in 1981.

On top of the fact that this is a highly collectible GMT watch that has flown around the world during a time in which the watch’s time zone function was actually useful, the watch also comes with a rare Mark III radial dial, “the rarest variant of all of the matte dial GMTs,” Barr says. “There are distinctive characteristics on the watch itself that allow us to further authenticate the exact reference and exact mark bearings of the watch he’s wearing, which is indirectly unique because it’s not a run-of-the-mill GMT.”

Its future owner also won’t be paying the premiums they otherwise would if this rare watch had shown up at auction. Wind, a former Christie’s watch specialist, says that without provenance this watch would be worth around £30,700 to £38,500. However, Wind noted that a similar watch, formerly belonging to Bolivian General Eduardo Galindo Grandchant was sold at Antiquorum last November for CHF 112,500  (approximately £92,400). “Although it was an earlier model, it was in pretty rough condition,” says Wind. “So, by comparison, we’re offering this watch at a good price. We could have put it up for auction and had a bigger story and get a higher price, but we didn’t want to roll the dice that way. We really wanted to offer it to our own clients directly.”

May the best man win.