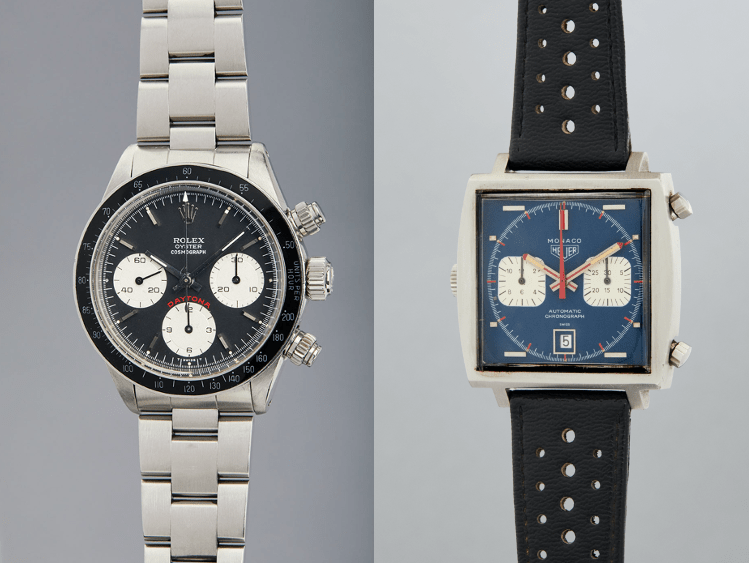 Phillips is revving its engines again. You may remember, back in 2017, the auction house sold Paul Newman’s Rolex Daytona for a record-breaking $17.8 million (around £13.75 million). Now it has another Paul Newman watch on its hands. This stainless steel Rolex Ref. 6263 Cosmograph “Big Red” Daytona—a nickname given to the watch for its large red letters spelling out “Daytona”—was, like the 2017 Paul Newman watch, given to the actor by his wife, Joanne Woodward, for their 25th wedding anniversary in 1983 and will be up for sale in Phillips on December 12 “Racing Pulse” auction. The watch currently belongs to the couples’ daughter, Clea Newman Soderlund. Proceeds from the sale will be donated to several charities, chosen by Sunderland, including the SeriousFun Children’s Network and the Safe Water Network, both founded by Newman. The back of the timepiece reads “Drive slowly Joanne.” According to Soderlund, her father wore the watch nearly every day until he gifted it to her in 2008, the same year he passed away. The watch is estimated in excess of $1 million (around £770,000).

While the Newman “Big Red” is outfitted with an Oyster bracelet, the actor wore the watch on everything from a bund strap to a President and a Jubilee bracelet. He was frequently photographed wearing the piece and was known to keep its pushers unscrewed so that he could more readily time events, including his daughter’s horseback riding lessons.

It will, no doubt, be the biggest watch sale of the year. 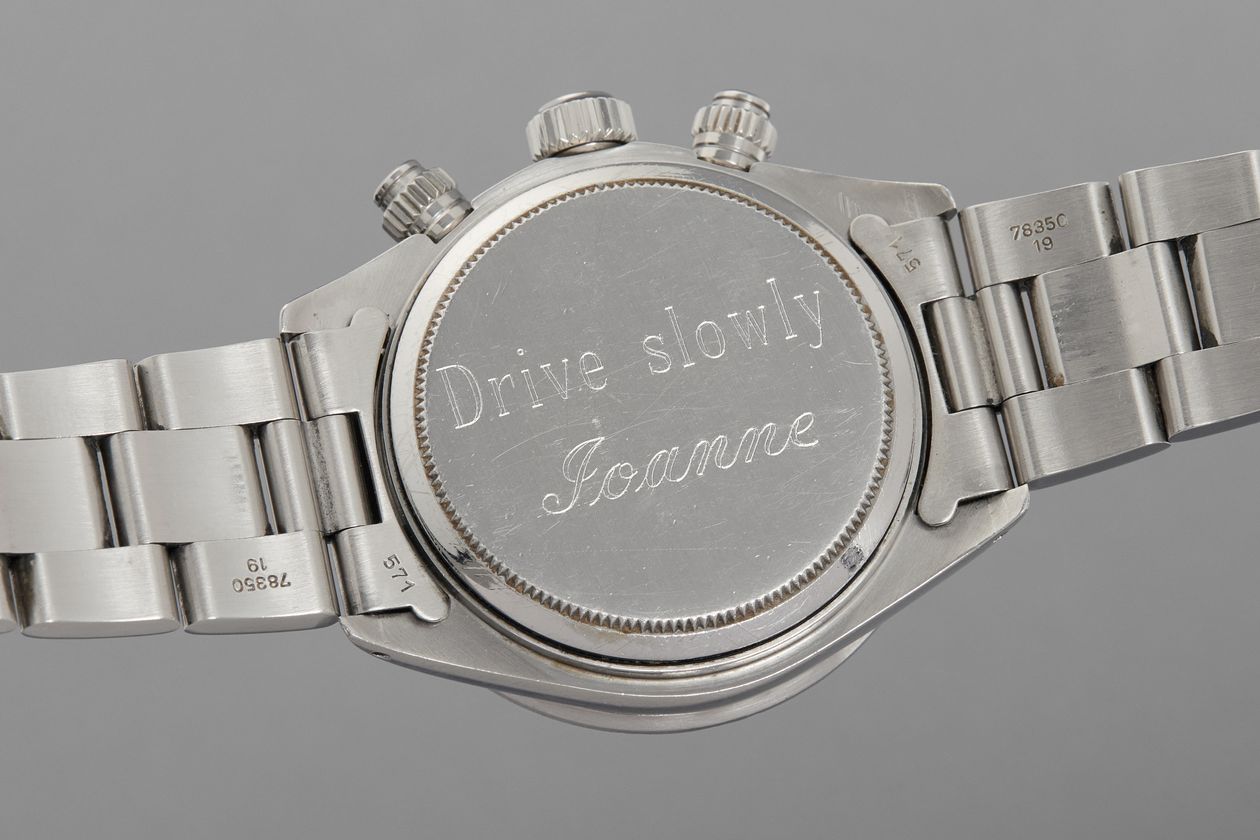 But that’s not all. The auction house is also bringing another Hollywood legend and avid race-car driver’s timepiece to the block. Steve McQueen’s 1969 Heuer Monaco Ref. 1133, worn by the actor during the filming of Le Mans in 1970, will also be up for sale. It’s perfect timing: This year marks the 50th anniversary of the famous racing flick, which effectively put Heuer (now Tag Heuer) on the global map. When the film wrapped, McQueen gave the watch to Haig Alltounian, the chief mechanic of the film and McQueen’s personal mechanic; the watch is coming to auction fresh from the owner. And while six blue-dial Monacos were delivered to the set for the film, Alltounian’s watch was the only one McQueen wore while filming.

Believe it or not, he says he actually refused the gift at first. “I said to him, ‘Don’t you want to give this to your son or keep it in the family?’ Alltounian told Robb Report. “When I said that, he grinned and chuckled and said, ‘It’s too late. It’s already got your name on it.’ I didn’t know it at the time, but he had it engraved with my name on the back of it.” The caseback reads, “TO HAIG Le MANS 1970” and has been in Alltounian’s possession for half a century.

The caseback of Steve McQueen’s Heuer Monaco. Courtesy of Phillips

The watch’s whereabouts were unknown until Alltounian told his story in the 2015 documentary Steve McQueen: The Man & Le Mans. A friend, who happened to be a watch collector, rang him up and convinced him he might want to consider parting with it. That friend brought him to Phillips. “We were thrilled and immediately expressed our sincere desire and interest to help in acquiring the piece for auction,” said Paul Boutros, Phillips’ head of watches for the Americas, with a laugh. “Within a month or two, I was on a plane to Los Angeles to meet with Haig for the first time.”

The decision to part with the heirloom wasn’t an easy one—the process reportedly took three years, but when 2020 rolled around the timing was right. “It’s the 50th anniversary of the filming of the picture Le Mans and at this time in my life—my age, my health, and wanting to leave a legacy for my family as far as their welfare—I felt it was time to part with the watch,” said Alltounian.

Phillips is keeping the estimate as “upon request,” but the watch will likely fetch well over $1 million. “It is a watch that is very important and, at the request of the consignor, we only want inquiries from serious bidders,” Boutros explained. Of the six Monacos that were a part of Le Mans, four belonged to the prop man Don Nunley, who sold them at auction (two of them now belong to the Tag Heuer museum). The fifth one, which McQueen gifted to his business manager, William Maher, sold at Antiquorum in 2009 for $87,600 (around £67,600). Alltounian’s McQueen Monaco is the last—but remember it’s the only one to have been worn in the film and to have a personal inscription from the actor. It remains in pristine condition and the race car mechanic says he only wore it for special occasions for a couple of years before retiring it to his safety deposit box.

Provenance of this magnitude, of course, will send this watch into the stratosphere but, in general, blue-dial Monacos from the ’70s are rare. “We estimate there are probably about 5,000 of the blue Monacos made throughout the period,” said Tag Heuer’s heritage director, Catherine Eberle-Devaux. “But the Dark Lord with the black dial is actually much rarer than the blue one. Probably only 100 were made and today it’s really hard to find one in good condition.” Now you know what to hunt for if you can’t get your hands on the McQueen Monaco.

But for die-hard automotive and motorcycle enthusiasts, McQueen’s wheels might pique your interest. The benevolent actor also gifted Alltounian his Norton Commando bike from the film, which is operational and still in its original condition. For now, he has no plans to part with it but, maybe one day the timing will be right to also part with his ride.