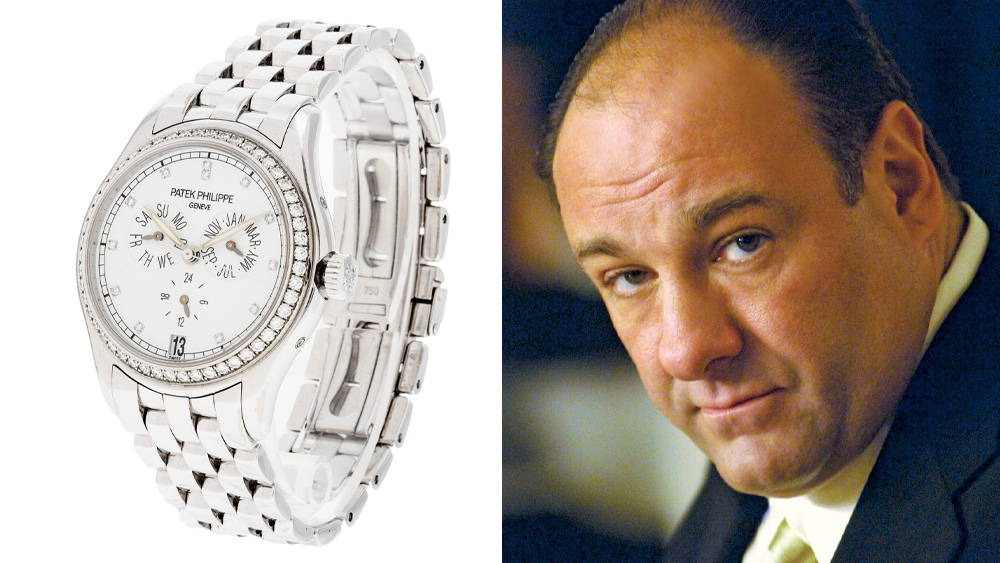 Tony Soprano is not the kind of character you would expect to come with a refined sense of taste. But at the height of his fame, the New Jersey mob boss picked out a show-stopping Patek Philippe timepiece, considered to be one of the world’s most elite and revered Swiss watchmakers, as a gift for one of his colleagues in crime.

The diamond-encrusted timepiece appeared in the “Watching Too Much Television” episode of The Sopranos that aired back in 2002. That’s well before rappers and hypebeasts started flaunting Patek Philippes in their songs and on the streets.

In the episode, Tony Soprano, who was portrayed by the late, great James Gandolfini, gifts his wife’s cousin, Brian Cammarata (Matthew Del Negro), the watch for providing him with sound advice in relation to a real estate deal.

The timepiece in question is a Patek Philippe Ref. 5037/1G. Boasting an 18-karat white gold case and bracelet, the annual calendar features diamond indices, a diamond bezel and all of the watchmaking expertise on which the brand has built its name.

“This is like a $15,000 watch, Tony. I can’t take this,” Brian says when Tony presents him with the Patek. The original retail price was actually significantly more than this.

Since the model is not part of Patek Philippe’s current collection, Soprano fans won’t be able to pick up a brand new version of the timepiece, but pre-owned versions of the model typically sell for over three times that amount. One is currently listed on 1stdibs for around a whopping £36,750, although you can find one on Chrono24 for around £23,400.

For his own wrist, the clinically depressed anti-hero opted for the king of watches. Throughout all six seasons of the highly acclaimed HBO series, Tony sports a classic Rolex Day-Date timepiece. Finished in 18-karat yellow gold, the watch features a champagne dial and a stately President bracelet.

While the watch has always been considered synonymous with luxury, its history as an illicit gift pre-dates its Tony Soprano fame. President John F. Kennedy was famously given a solid gold Rolex Day-Date on May 29th, 1962 from his notorious lover, Marilyn Monroe. The watch sold for around £95,500 at auction in 2005.

In case you were wondering where Tony Soprano learned about watchmaking’s elite, the kingpin can be seen reading a Robb Report in the “Live Free or Die” episode of Season 6.