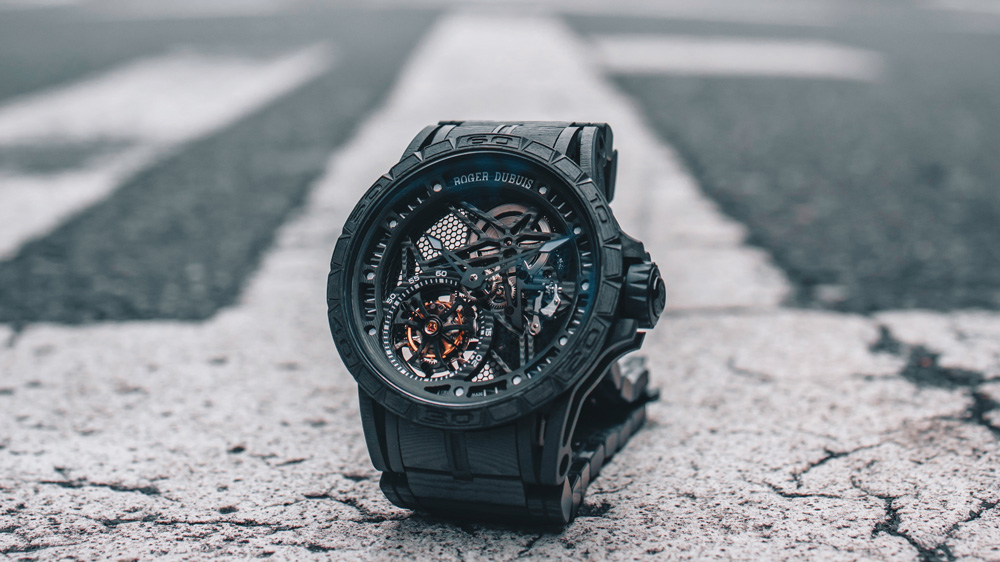 Carbon has been around in modern watchmaking for a while now, most often seen used on cases. But in Roger Dubuis’s new Spider Excalibur Carbon3 not only the case, but also the bracelet and some components of the movement are made from the super-tough material. The advantage of carbon composites is that they are super-light (more than half the weight of titanium), yet highly shock resistant and as strong as steel.

Carbon’s special properties make sense for Roger Dubuis, and particularly the Excalibur series, because it allows the watchmaker to go big without the heaviness of a large watch weighing down the wrist and Roger Dubuis is nothing if not big—even CEO Nicola Andreatta admits the word that sums up the company’s DNA best is “excess”. A typical case width is 47 mm. Even the brand’s ladies’ watches are no smaller than 36 mm, and many are 42 mm. The Spider Excalibur Carbon3 is 45 mm wide and 14.05 mm thick.

Carbon is also important because of its tensile strength, which makes compatible with Roger Dubuis’s other specialty: skeletonisation. The art of openworking a watch movement is tricky because the goal is to carve away as many of the bridges and plates as possible without losing strength and shock resistance. Using carbon alleviates these concerns. The plate, bridges and tourbillon upper cage of the RD590SQ caliber are all made of carbon.

Another advantage of the material is that it simply looks good. It is formed in layers, giving the hardened material a unique graining pattern that adds depth and dimension, and an interesting marbling effect. The case is actually quite complex. It is carbon, but it is overmolded with black rubber and has a black DLC titanium caseback. The crown is also titanium, with an overmold of black rubber and topped with a multi-layer carbon crown cover. The bracelet links are also made of multi-layer carbon. And if that’s too much carbon for one watch, there is also an additional strap available in rubber with red stitching.

The watch will be made in an edition of 28 pieces, a typical number for Roger Dubuis, which makes small editions of its skeletonised flying tourbillons. But that’s not the only thing that makes this watch rare. It is made to Poinçon de Genève standards—of the 20 million watches produced in Switzerland each year, only 24,000 bear the Hallmark of Geneva. It guarantees the watch’s mechanical movement has been assembled, cased and adjusted in the Swiss Canton of Geneva.

Each component of each section of the movement is individually finished and decorated by hand, and each watch is individually tested and certified in order to guarantee its smooth running, water-resistance and precision.

The finishing is not just aesthetic. It also makes the watch run better, reducing friction and ensuring exceptional durability. Roger Dubuis says it takes 40 percent longer to produce watches made to Poinçon de Genève standards and all of its watches carry the Hallmark.