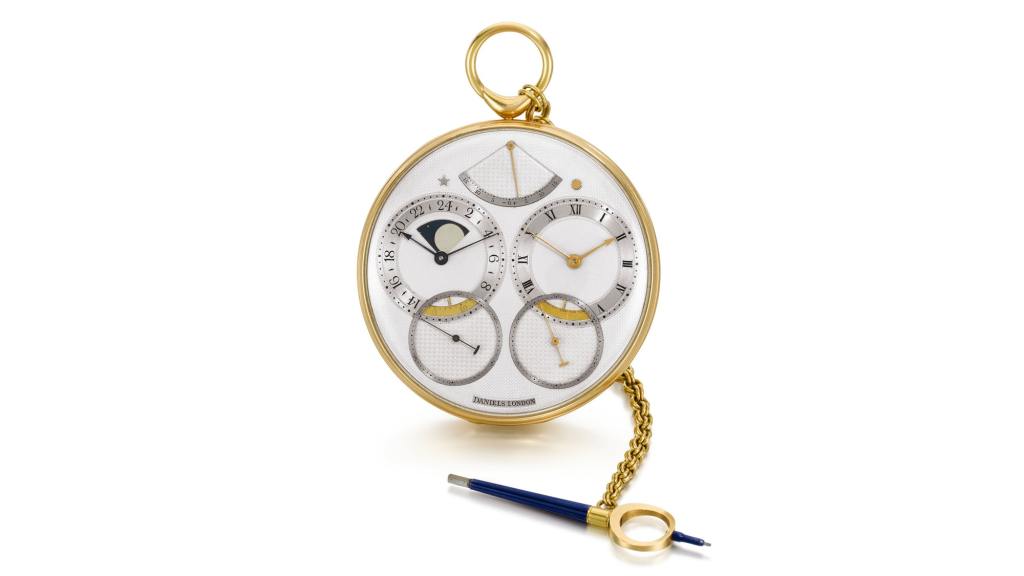 The greatest watchmaker of all time? It’s a toss-up. The 19th century had Abraham-Louis Breguet, the French watchmaker responsible for scores of innovations, including the tourbillon, but the 20th century had George Daniels, the pioneering British watchmaker best known for inventing the co-axial escapement in 1974, hailed then as the greatest advance in horology in 250 years.

If auction prices are any indication, Daniels may soon edge out the competition. Yesterday at Sotheby’s London, the Space Traveller 1, a pocket watch Daniels completed in 1982 to commemorate the American moon landing 13 years earlier, sold for around £3,625,000, more than three and a half times its high estimate, setting a world record for a timepiece by an independent watchmaker and the highest price achieved for a watch at auction this year.

Daniels, whose fixation with space travel was legendary, famously touted the watch as the ideal timekeeper “on your package tour to Mars.”

Its multiple complications include both solar and sidereal time, the equation of time, and phases of the moon, not to mention the signature Daniels escapement—the part of the watch that controls the speed at which energy escapes from the movement—which requires virtually no lubrication, eliminating a major form of wear and tear. (Omega introduced a commercialised version of it into a select range of watches in 1999 and has expanded its availability across its collections in the two decades since.)

Three years in the making, the yellow gold watch was sold to the antique London watch dealer Bobinet, and then to the collector Jay Lennon. In 1988, it surfaced at Sotheby’s Geneva and was sold to a private collection. But Daniels pined for the timepiece—so much so that he followed up with a second example, the “Space Traveller II”, which remained in his possession until his death in 2011 (and was later sold, twice, by Sotheby’s, in 2012 and 2017).

According to a note in the Sotheby’s catalog, Daniels protégé Roger Smith called the Space Traveller watches the “culmination of thirteen years of making highly original one-off pieces and went on to be the catalyst for many future developments”. The house also noted that the Space Traveller I had not been seen in public (nor offered for sale) since 1988.