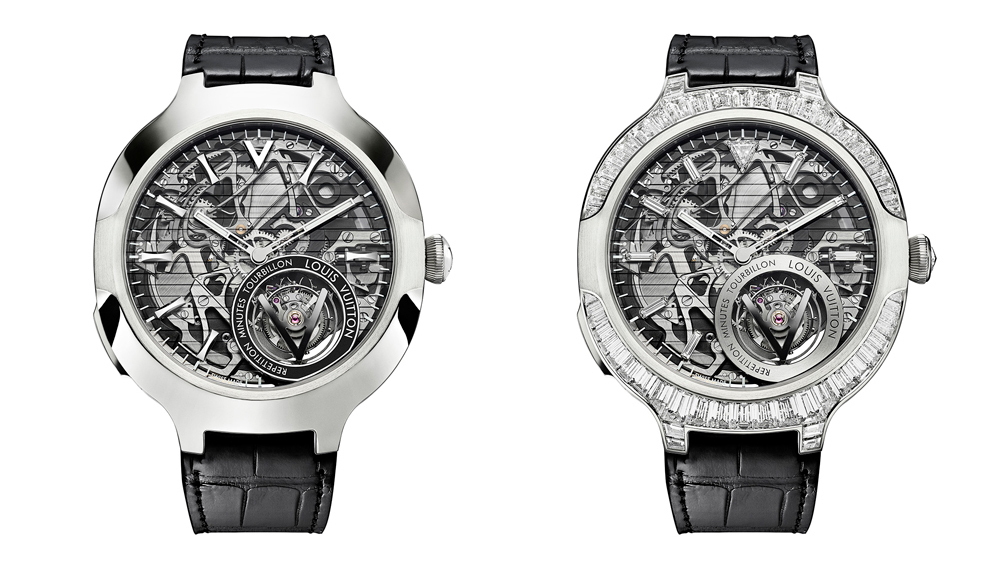 You might be surprised to learn that a luxury company as massive as Louis Vuitton would treat its watchmaking division as a secretly elite boutique operation. Everyone knows Louis Vuitton’s iconic LV monogrammed brown leather bags derived from their trunks; most luxury enthusiasts know French master Nicolas Ghesquière is the man behind their women’s collections; and by now, almost anyone even remotely tuned into fashion knows Virgil Abloh’s men’s designs for the house have become a large-scale hit. But few outside of the watchmaking industry know the names Michael Navas and Enrico Barbasini…but they should.

The watchmaking masters sharpened their skills working for some of the greatest watchmakers in history. Navas and his business partner, Enrico Barbasini, spent approximately seven years working for watchmaking great, Gerald Genta, while he was still at the helm of his company, at the height of its heyday (Gerald Genta’s business was eventually purchased and folded into Bulgari’s watchmaking division in 2000). They both spent years working on minute repeaters at Patek Philippe—watchmaking at its absolute pinnacle. Navas also spent some time at Audemars Piguet and both Navas and Barbasini had a stint at Franck Muller, where they helped conceive the brand’s famous Crazy Hours and Revolution tourbillon watch. The duo would eventually go on to found their own watchmaking company La Fabrique du Temps, where one of their top clients was Laurent Ferrier—a fellow Patek Philippe alum. They started making watches for Louis Vuitton in 2007 before the luxury company purchased La Fabrique du Temps in 2011.

Since then, the company has been in charge of turning out Louis Vuitton’s signature high-watchmaking pieces from its tourbillon timepieces, the Mysterious Watch (known for its movement that seemingly floats within the case), its world timers, the Spin Time (known for telling time by spinning rotating cubes), and its minute repeaters. A staff of approximately 80 help conceive these creations, but only three watchmakers are capable of creating the minute repeaters.

Just after SIHH this year, Louis Vuitton unveiled its third minute repeater in the snowy upscale French ski town of Courchevel. There Navas was on hand to present the latest masterpiece, the Louis Vuitton Voyager Minute Repeater Flying Tourbillon (round £230,000). The watch, as its name suggests, combines two high-complications in one in a surprisingly slim 42 mm x 9.7 mm-thick 18-karat white gold case despite its gutsy interior. It contains the 345 component LV100 caliber with 100 hours of power reserve. The flying tourbillon is located at 5 o’clock and appears to float above the dial.

But it’s the minute repeater that is the real show piece of the watch. The striking mechanism has two gongs and two hammers to indicate the hours, quarter hours and minutes on demand via the trigger positioned at 8 o’clock on the case. A low note signals the hours while a double low-high note indicates quarter hours and a high note rings in the minutes. And for the first time, Louis Vuitton has presented a minute repeater with a Cathedral gong, allowing the timepiece to retain a deeper sound with a longer resonance time. It’s a technically challenging creation in such a small space as the gongs cannot touch one another or any other element of the movement or case.

And it wouldn’t be a high-end Louis Vuitton timepiece without a little custom monogramming. Clients can have the option of replacing the LV-monogrammed circular plate on the back of the movement, visible through the sapphire crystal glass, with their own initials for a personal touch.

“We try to be different, because we are very young in the watch industry—only 16 years,” says Navas. “We have to bring something else to the table that you won’t find elsewhere, with the utmost respect for high-watchmaking, of course.”

The pieces are not limited, however each will come numbered, and you can expect production to remain small due to the difficulty in creating complications at this level. Many will have their hands on an LV handbag and some will want a piece of the ready-to-wear or perhaps one of Abloh’s latest hyped-up creations, but only the brand’s most elite clientele will be adding its latest minute repeater to their collection.