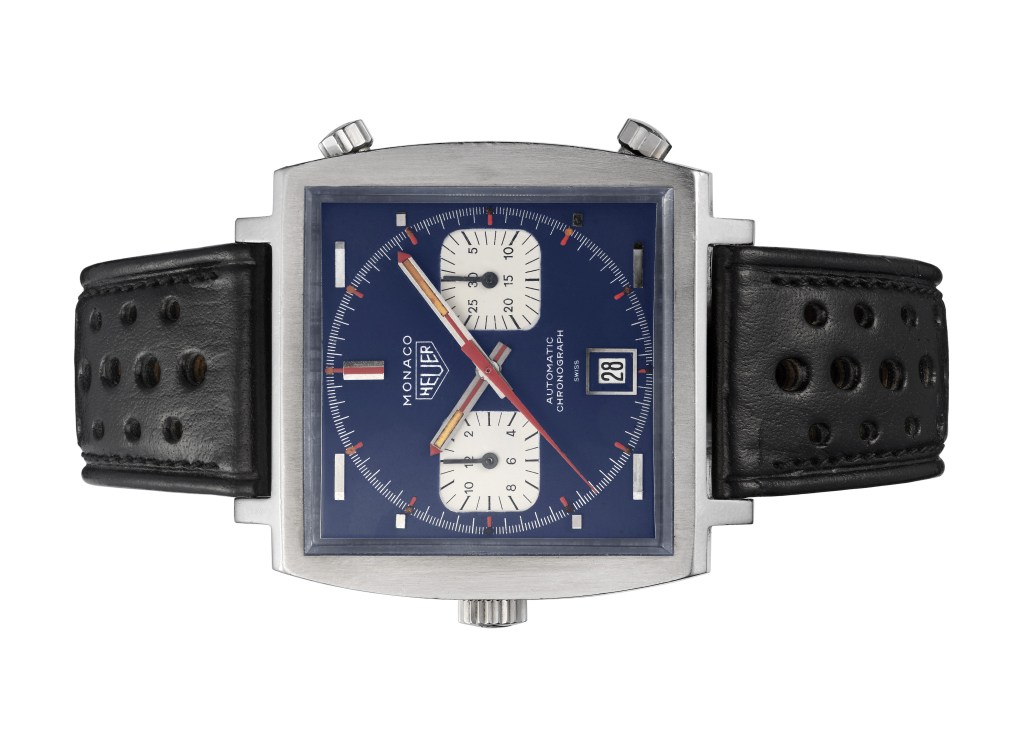 Amongst the thousands of motorsport fans who attend the Geneva motor show each year, there are always a good number of horology enthusiasts – and they tend to make a beeline for the 1000-square-metre stand belonging to Tag Heuer.

And, this year’s attendance is particularly special for the watch brand, as it marks the 50th anniversary of the Monaco watch: the first water-resistant timepiece with a square case, the first automatic chronograph and the first and foremost watch to be inextricably linked with an actor whose eyes match the colour of the dial.

Steve McQueen wore a Tag Heuer crest on his racing suit and a square-dial Heuer Monaco on his wrist in the 1970 film Le Mans, launching the watch into the same realms of silver-screen mythology as the Rolex Submariner with striped nylon strap worn by Sean Connery in Goldfinger.

We took Tag Heuer’s Heritage Director, Catherine Eberle-Devaux, aside for a chat.

Why are heritage-hailing events such as 50 Years of Monaco so important?
The Monaco Chronograph is one our icons – one of the most iconic of the watches we’ve produced. And, 50 years is a very symbolic step in a lifetime, so we’re proud to bring this under the spotlight and celebrate the Monaco series.

What makes the watch itself so special in TAG Heuer’s own story – and indeed broader horological history?
The Monaco was designed to be the highlight of the Calibre 11 launch – Calibre 11 being the first automatic chronograph movement, which was a true revolution back in 1969. Jack Heuer, the great-grandson of the company founder Edouard, placed it in the best-selling collections, Carrera and Autavia, and wanted to develop an even more striking piece for it. His supplier presented the first square case that was waterproof. During this stage the square case design was chic and sophisticated, rather than sporty and reliable. Jack immediately saw the potential to produce a sporty, glamorous and reliable timepiece combining the Calibre 11 movement and a square, waterproof case. He selected a blue dial and named it in reference to motor-racing and Glamour. The Monaco was born.

What first drew you to watchmaking as a profession – do you recall a catalyst moment?
The beginning of my journey lies in heritage and patrimony. I’m convinced of the “No future if no past” adage. A company that takes care of its patrimony will definitely go further and build a positive identity. The magic of watchmaking is that a mechanical assembly of metal wheels moves all by itself, and tells the time, which is something a human being will never be able to dominate. What a symbol! TAG Heuer, on top of that, is linked to motor-racing, which tries to conquer speed. This combination is fascinating to me.

Did you have formal education in horology?
I’ve spent a lot of time with the watchmakers – the people who work in the production line and make our modern pieces among the most reliable on the market, including those from Haute Horlogerie who explained the high complications, as well as those who restore the vintage pieces and who explained the evolution of the watches’ mechanics. So, I had a rather unusual yet also formal training.

How did you first encounter TAG Heuer?
It was my first high-end watch when I was just 24. An S/el  watch, black with a leather strap. I still have it and enjoy wearing it – especially at the weekends, as it fears nothing!

What is it about TAG Heuer’s history that resonates?
The brand is always moving forward and invents its own way based on the philosophy that innovation is at the core of its tradition. There is no nostalgia in the ways in which we choose to embrace our heritage.