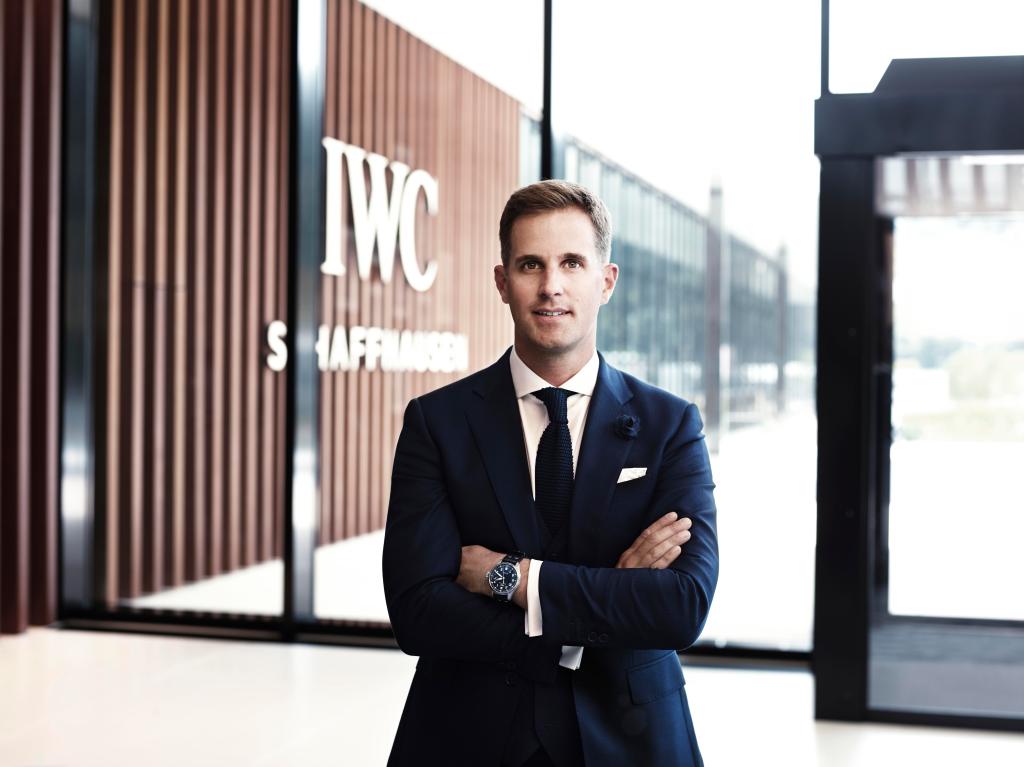 How does IWC decide what initiatives and pop-culture avenues to become involved with?
In terms of communication, we want the sort of broad global campaigns and awareness building that comes with having ambassadors, with our support of the “Silver Spitfire – The Longest Flight”, our partnerships with the Mercedes AMG Petronas Formula One team and the Goodwood Members Meeting. Then we have more localised and customer-centric activation. What we’re always trying to do is connect our products with a story. With the Spitfire watches, we develop a deep connection between why a pilot’s watch is designed the way it is and the emotional story of what actually went on when they were used originally.

It gives us the opportunity to walk into an event such as SIHH or Goodwood and walk into the story of the spitfire – feel it, breathe it, touch it and live it. At Goodwood we took a lot of our clients up in the restored Spitfire and that, really, is for me the moment which creates an emotional connection to why the product is what it is.

How does that relate to IWC’s involvement with the BFI?
With our involvement with the British Film Institute BFI, that’s a case of just finding a great organisation that does fantastic work, helps and inspires young people, makes a real difference you know, right? We have that too with the Laureus Academy, which helps young cycling athletes get into pro-teams and potentially the Olympics. The BFI has helped tonnes of actors, filmmakers and directors to develop their careers.

Why did you choose British Film Institute as the movie organisation to become involved with?
I don’t know any other organisation anywhere in the world that does so much for the global talent base of film. And when you see all the people that come through – Olivia Colman, a fellow of the BFI, is just one – and the British actors winning Oscars and – it’s absolutely unique. British actors and filmmakers are everywhere now. We’ve visited quite a few Hollywood film sets recently, and when you speak to people in the breaks, you constantly find people who’ve had support from the BFI. The talent fostering that organisation does has a huge impact. It’s not just some theoretical or abstract arts organisation – it gives real, genuine support to future filmmakers into our directors and actors.

…and the watch created to celebrate it

You could call it a kind of cultural sustainability – a major buzzword in watchmaking right now…
Yes. Like we are intrinsically sustainable with the products that we make, because we believe in longevity and in making things well, socially responsibly.  We think making things that last is more sustainable than opting for eco materials but still throwing things away every two years. We have a 150-year history; our perpetual calendars run to 2499 without any updates. Today’s consumption patterns see things replaced so quickly – there is such turnover of consumption – and so it’s about getting people to understand the long-term value of something you own long-term, build a relationship with. That’s infinitely more sustainable than the culture of constant replacement.

Are people responding well to cultural philanthropy in luxury?
It’s a case of storytelling evolving massively. It needed to move on from pure advertising to genuine heartfelt narratives: to things which people could really fundamentally engage with. That all comes down at the end of the day to creativity and giving creative people the space and the freedom to develop an idea: you can’t do that with committees – you have to find somebody has a raw beautiful idea and give them the space and the freedom to run with it. That’s the same in watchmaking as it is in filmmaking and everything else.

This is why the Bursary Award with the BFI is so important. It doesn’t try to dictate the creativity – we’re looking at budding filmmakers and then giving them the space and financial freedom to actually concentrate on developing the next idea and the next project, regardless of what that may be. If you want real creativity today you have to recognise talent and shelter creativity from too much commercial strain, production deadlines and all the rest of it right. That’s the route to mediocre outcomes.

Where does sport fit into all of this?
The fundamental thing about sports, whether it’s The Premier League or Formula One, is that you have a huge target audience of relevant people in relevant regions. Spurs are particularly interesting because they have a huge fan base in Asia, they have a Korean player in Son Heung-min. Both managers were wearing our products at the last Champions League final.

Employee welfare is also a big deal for IWC… Is the luxury world in general becoming more benevolent, compassionate and responsible?
I think it always has been. Look how many luxury consumer brands are still in the place where they were founded originally – not just theoretically, in terms of a head office, but with all creation, production, planning, shipping taking place there. Today, I basically sit in the same office where Florentine Ariosto Jones started in 1868. We still get all our power from the River Rhine, directly or indirectly. I can show our clients every single step of production, from a watch’s first pencil sketch, plus the R&D, every step of production and assembly, the ladies and gentlemen who design our boutiques and film concepts – everything, all in the same place.

The fact that it happens in a single environment, in a country with excellent employee welfare, with a product as emotional as a luxury watch, it helps our clients continue to feel good about the product. Doing things responsibly is an important message when you make a non-essential luxury product.

In September we were awarded “Great Place to Work” certification – the first watchmaker in Switzerland to receive it.

Do you see any changes in taste on the horizon, when it comes to watch design?
Yes, probably. We’ve had for quite a few years now dominated by retro styling, which I’ve always thought has a lot to do with increased digitalisation and massive technological progress. People are yearning for these mechanical things that are harking back to a past that was seemingly simpler and easier to control. The beauty of analogue is always not controlling it; with digital it controls us – you know, the whole Terminator thing. There’s a huge nostalgia in watchmaking, but I think we’re coming to a time where that’s gradually shifting again. We’re seeing more contemporary or forward-looking designs coming through.