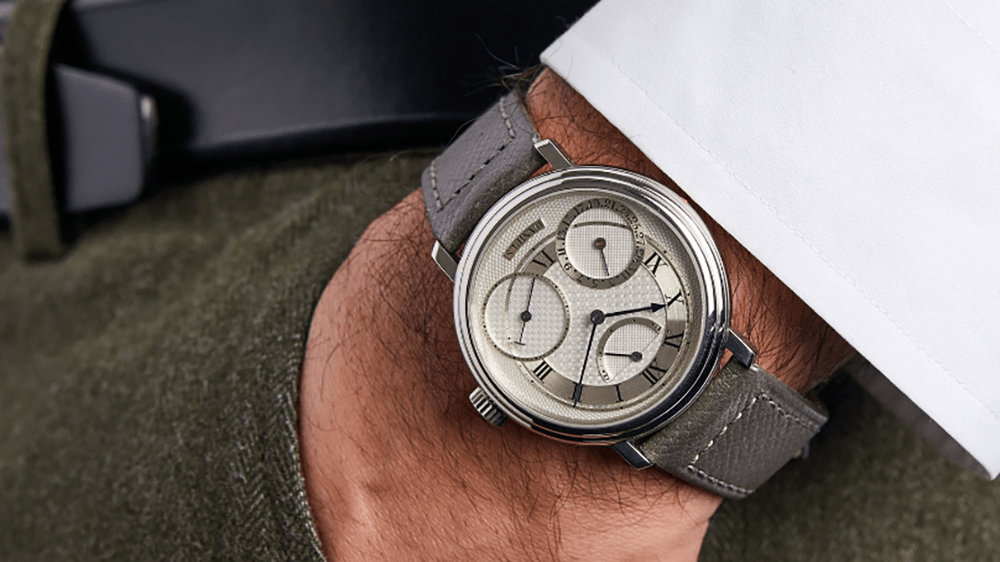 Their New York Watch Auction Six, held over the weekend, raked in $30,332,000 against a high estimate of $18.7 million (around £15 million). That sum represents the second-highest total for a US watch auction in history (the December 2021 Phillips New York Watch Auction achieved the highest, at $35.9 million). Five watches sold over the $1 million mark and two overtook the $2 million threshold. Several records were set, including one for a Rolex Daytona 6264 “El Limoncito,” a Rolex Rainbow Daytona and a piece by British watchmaker Roger Smith. The sale concludes a white-glove (meaning all lots were sold) spring season at the Phillips watch department, for a total of $127.2 million. In fact, it concludes an 18-month streak of white-glove watch sales for Phillips.

The top lot was the first platinum George Daniels Anniversary watch, with serial number 00. It sold for $2,389,500, setting a record for a George Daniels wristwatch and for any British-made wristwatch at auction. It was one of four platinum pieces in a series of 47 released in 2010 to commemorate the anniversary of the invention of Daniels’s co-axial movement. A portion of the proceeds from the sale will benefit The George Daniels Educational Trust, The Alliance of British Watch and Clock Makers and the Horological Society of New York.

The second-highest lot was a Rolex Paul Newman Daytona Ref. 6264 with a lemon-yellow dial. It was nicknamed “El Limoncito” as an homage to the Mexican origins of the family who owned the watch since its production in 1969. It sold for $2,087,000, over a high estimate of $1.2 million.

Three F.P. Journe watches sold for over $1 million, which represents the continuation of an upward trajectory for the brand, rivaling the popularity of vintage Patek Philippe at auction. A platinum Chronomètre Souverain watch that was gifted to George Daniels by Journe himself sold for $1,482,000, a world record for the model, and the third-highest lot in this auction. Fourth-highest was a Tourbillon Souverain No. 035/99T, selling for $1,361,000. Next, a Tourbillon Souverain with a constant force remontoire and a unique jade green dial, sold for $1,240,000 against an estimate of $200,000-400,000, a record for that model.

Watches made by independents generally did well in the sale, including pieces by DeBethune, Greubel Forsey, Urban Jurgensen and Konstantin Chaykin. A piece by British watchmaker and George Daniels mentor Roger Smith, a platinum Series 2 Open Dial, sold for $840,700. It was one of four platinum examples in a series of 12.

Rounding out the top ten was a Rolex Rainbow Daytona in pink gold with a rainbow sapphire-set bezel, setting a record for the model at $693,000; and an A. Lange & Söhne Lange 1 Tourbillon Handwerkskunst in platinum numbered 16 of 20 to commemorate the 20th anniversary of the Lange 1, selling for $529,200.

The collection of the late actor James Garner—primarily watches from Cartier—was a highlight of the auction, with a portion of its collective sale value of $223,020 going to support the James Garner Animal Rescue Fund. One of Garner’s lots was a one-of-a-kind TAG Heuer Carrera with a personalized dial that sold for $176,400, nearly six times its low estimate. It was acquired by a collector with deep pockets: the TAG Heuer Museum. Garner was a race car enthusiast, an Indianapolis 500 pace car driver and producer and star of the 1966 movie Grand Prix.