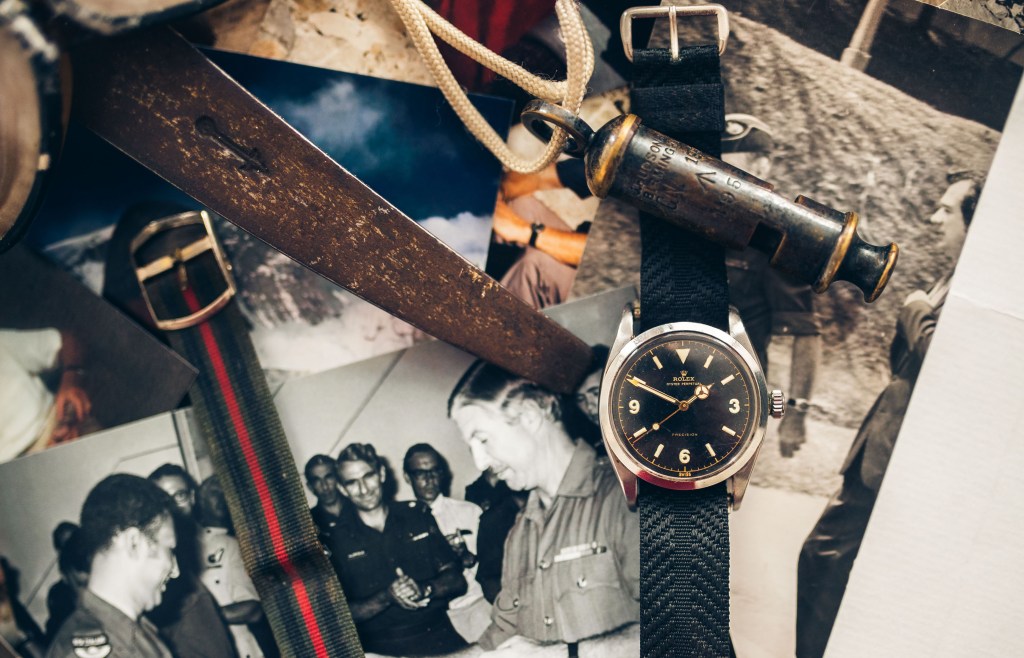 If you’ve not heard of the intrepid adventurer Tony Streather, but do keep an eye on the Geneva watch auction scene, he’ll be a familiar name soon. Revered as one of the greats of the golden age of Himalayan mountaineering, Streather was amongst the first group of climbers to reach the summit of the 8,000m Kangchenjunga, which lies between Nepal and Sikkim, India, in 1955. He conquered the summit despite his participation in an ill-fated US expedition to climb K2 – which entailed a horrific tempest, a desperate rescue mission and several severe injuries to fellow climbers – just two years previously.

It was just before the Kangchenjunga mission, which is now regarded by many as one of the greatest unsung achievements of British exploration, that Rolex gifted him a Explorer 6150, which is being exhibited during the Geneva Watch Auction: NINE today until 12th May at Hôtel La Réserve before being put up for private sale with Phillips Perpetual – a platform which presents fine collectors’ pieces for sale as well as carrying out ongoing curated programming, private selling exhibitions and various partnerships.

It’d be a stretch to say that the watch brought Streather luck – legend has it that, when the oxygen bottles belonging to Streather’s New Zealander climbing partner Norman Hardie slipped out of its carrying frame and into a snowy oblivious, Streather gave Hardie one if his and survived on just a trickle of air for the rest of the exhibition.

But it is, of course, an incredible collector’s piece – not least thanks to its NATO strap, which was given to Streather to go with the watch during a period serving with the Gurkhas in Sarawak in 1966 – and an honour for anyone, surely, to own a watch with so many remarkable stories behind it, owned by a heroic adventurer who was awarded the MBE in 1965 and the OBE in 1977.

“Tony Streather was an incredible man and his Rolex 6150 Explorer is a unique piece of history for the brand,” says James Marks, Phillips’ International Specialist and Director, Watches.