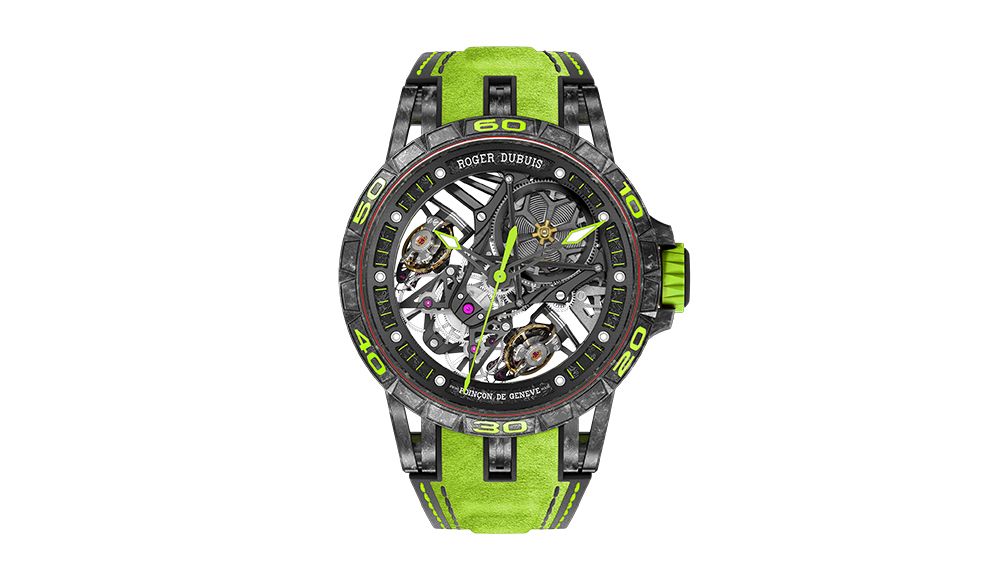 A ridiculously powerful track-only hypercar isn’t the only new release Lamborghini had in store for enthusiasts this week. In fact, on the same day that the Essenza SCV12 was unveiled, the automaker also revealed that it had teamed up with Roger Dubuis for a limited-edition timepiece inspired by the car.

Dubbed the Excalibur Essenza SCV12, the so-called “hyperwatch” is the latest collaboration between the supercar specialist’s motorsports wing, Lamborghini Squadra Corse, and the Swiss watchmaker. But the flashy timepiece is more than just a green variant of the existing Excalibur Aventador S watch; it also features a reworked version of Roger Dubuis’s Duotor movement.

The Excalibur Essenza SCV12 does bear a striking resemblance to the Excalibur Aventador S, but we’re guessing neither Lamborghini or Rober Dubuis fans will mind. Like the companies’ previous collaborations, it features two sprung balances inclined at 45 degrees, strut bars, a power reserve with racing codes and an Alcantara strap, all of which are now accented with lime green. Underneath the watch’s hood, the Duotor calibre—which is a Lamborghini-exclusive Roger Dubuis movement—has been stripped down to the essentials in order to improve performance. But that’s to be expected for a watch named after the automaker’s most powerful vehicle.

Of course, there’s another way that the new watch is just like the hypercar it’s named after. It can also be customized through Roger Dubuis’s “Rarities” program. This is meant to give owners a chance to be as much of a co-creator of their one-of-a-kind timepiece as the automaker and watchmaker.

It should come as no surprised that Roger Dubuis would pull out all the stops for the Essenza SCV12, because the car itself is mighty impressive. Limited to 40 examples, the track-only speedster features a naturally aspirated V12 that produces 830 horsepower, easily making it the Raging Bull’s most powerful vehicle yet.

A release date for the timepiece hasn’t been announced yet, but you can register your interest at the company’s website now. No word yet on pricing, but the initial Excalibur Aventador S started at around £140,000.

Two New(ish) Watch Shows Are Coming to Switzerland and China