By Victoria Gomelsky on December 3, 2020 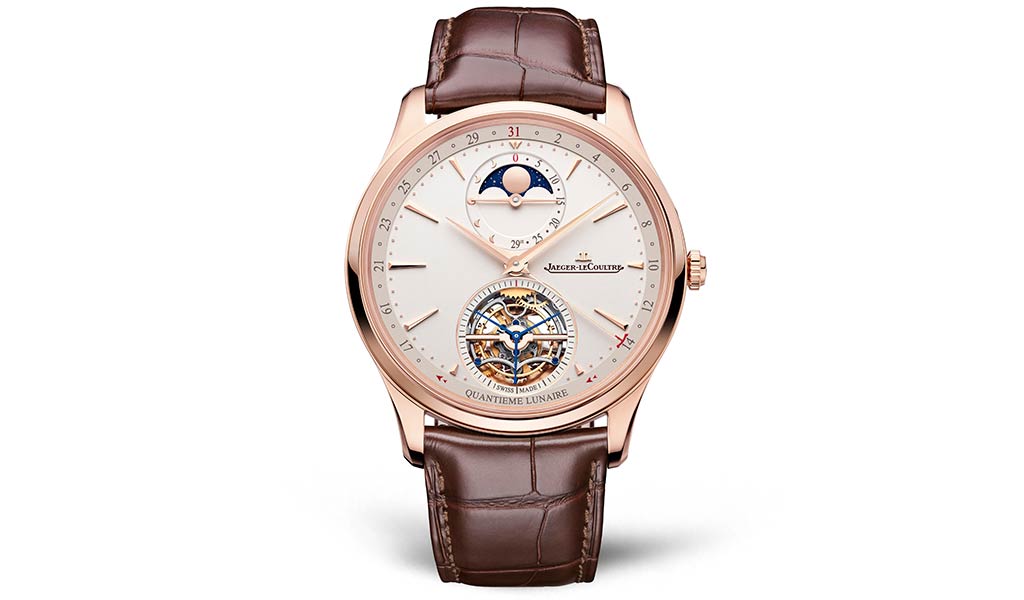 Of the six watchmaking complications recognized as the building blocks of high horology—the tourbillon, moonphase calendar, perpetual calendar, split-second chronograph, minute repeater and ultra-slim model—three are featured in the new Master Ultra Thin Tourbillon Moon from Jaeger-LeCoultre, whose name says it all.

The model marks the first time in the Swiss watchmaker’s long and storied history that the moonphase and tourbillon appear together. To make that possible, Jaeger-LeCoultre developed Calibre 983, a new movement built using the Calibre 978, introduced in 2009 in the prize-winning Master Tourbillon, as a foundation. To truly set it apart, the new calibre incorporates a moon phase and jumping date complication, as well as a power reserve of 45 hours.

The fully polished 41.5 mm case of the Master Ultra Thin Tourbillon Moon is fashioned from Le Grand Rose gold, a pink gold alloy infused with palladium to protect it against corrosion and discoloration. The pink gold of the case pairs beautifully with the model’s eggshell-white dial. Elongated and beveled lugs, Dauphine hands and applied golden indexes with an elongated arrow shape all add to its unmistakable sense of refinement.

But it’s the display of the astronomical complication where the model truly reveals its elegance: Set at 12 o’clock, the moon phases of the Northern hemisphere are indicated by a polished gold disc set against the backdrop of a deep blue sky dotted with stars. A ring surrounding the display features applied Southern hemisphere moon phases on the left and the age of the moon on the right.

The tourbillon at 6 o’clock boasts a newly designed bridge in polished pink gold, in contrast to the tourbillon cage in titanium. From the back, the finishing on the movement — including Côtes de Genève decoration, a pink gold winding rotor featuring the JLC logo and a combination of polished and micro-blasted surfaces — completes the picture. It is a wristwatch that is beautiful, inside and out.

The model—which, like all of Jaeger-LeCoultre’s timepieces, carries an 8-year warranty—retails for $81,500.