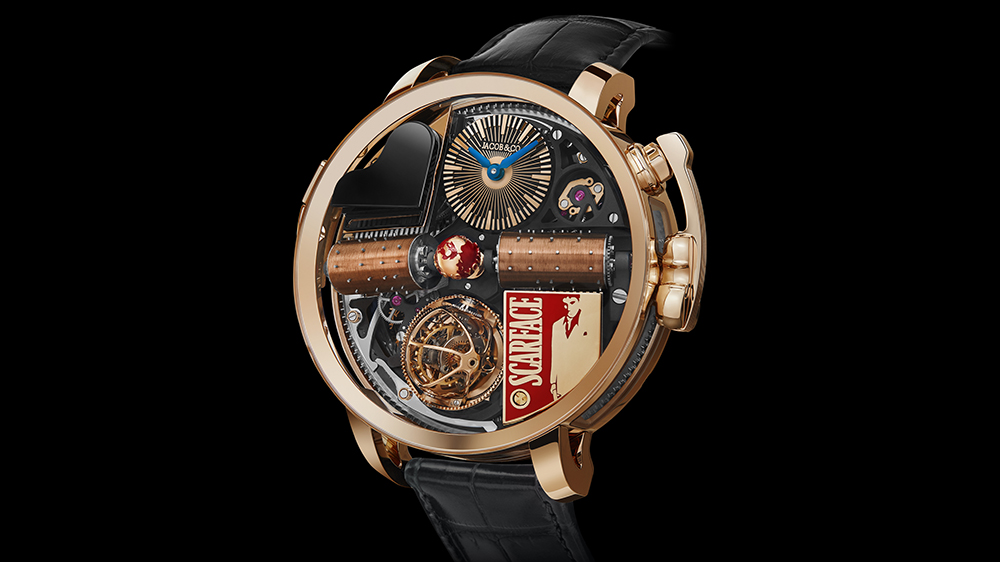 Say hello to your new little friend: a badass luxury timepiece based on Brian De Palma’s undeniably influential film Scarface. It has just the right amount of pizzazz and promises to be a true scene-stealer once upon your wrist.

So, who put this thing together? The masterful watchmakers at Jacob & Co., who went all out with this limited-edition timepiece.

Building upon the brand’s famed Opera collection, the new Opera Scarface features an integrated 120-note music box and strikes a truly powerful note. Just a press of the pusher at 10 o’clock and the timepiece starts playing the “Bolivia” theme from the 1983 American crime drama, while the entire dial rotates 120 degrees. Throughout these theatrics, the time display remains in the correct 12/6 position thanks to a patented differential system.

Further cinematic references can be found under the domed, anti-reflective sapphire crystal case. There’s an 18K gold, black-lacquered piano—the keys move while the music plays, of course—along with a striking bright red Scarface nameplate which features a silhouette of Tony Montana himself.

The watch is powered by Jacob & Co.’s trademark triple-axis tourbillon movement that’s wound by the 18K rose gold violin-shaped crank on the side of the watch. The movement features a tourbillon that turns in 24 seconds on one axis, eight seconds on the second and 72 seconds on the third. And smack bang in the middle of the movement is an 18K rose gold “The World is Yours” globe, which mirrors the one found in the entrance hall of Tony Montana’s Miami mansion.

Since the power reserve for the movement and the music box are separate, the watch can run for 42 hours straight, while the music box can be played three times before you have to wind it again. The watch is available in either black DLC titanium or 18K rose gold, the latter of which complements the gold accents on the dial.

The Opera Scarface watch is limited to just 88 pieces and available now through the Jacob & Co. website.